After the fall of the Soviet Union twenty years ago, water distribution in Central Asia became a source of conflict. In areas where summer precipitation is low, glaciers play an important role when considering the quantity of available water. The Tien Shan region is a prime example; mountain glaciers in this region contribute significantly to the fresh water supply in the arid zones of Kyrgyzstan, Kazakhstan, Uzbekistan, Turkmenistan, and Northwestern China. Like Switzerland, Kyrgyzstan serves as a water tower for its neighboring countries.

This NASA image shows the formation of numerous glacial lakes at the termini of receding glaciers in Bhutan-Himalaya. 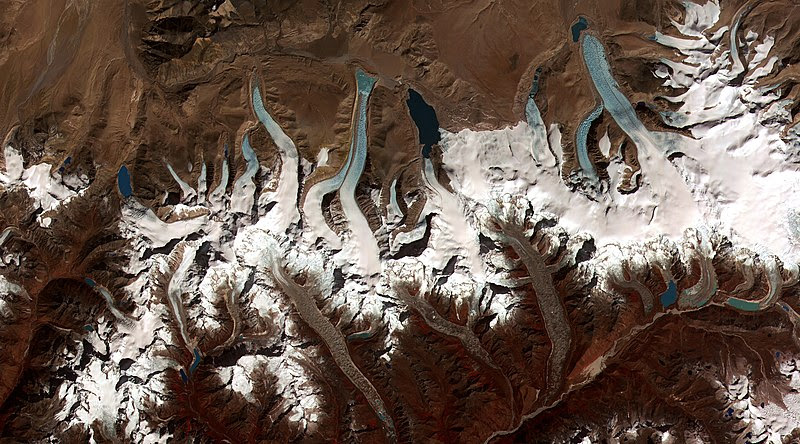 While the impact of climate change on glaciation and water flow in the Tien Shan Mountains has already been the subject of studies, a consistent and local perspective of collected data has never before been presented. The results of this research, led by the l'UNIGE, show that the retreat of glaciers is more pronounced in peripheral areas, where summers are dry and melting ice and snow are key sources of water.

Glaciers are losing their surface every year

The glaciers in the Tien Shan Mountains cover a surface of over 15,000 square kilometers, equivalent to one third of the surface area of Switzerland. In recent decades, these glaciers have lost between 0.1% and 0.8% of their surface per year; a decrease comparable to that of alpine glaciers. The largest retreat was observed on the periphery of the Tien Shan Mountains, near the major cities of Almaty, Bishkek, Tashkent and Ürümqi.

"In the summer, glaciers are the only source of fresh water for irrigation and household consumption in these regions," said Annina Sorg, first author of the study and researcher at the ISE (UNIGE) and at the Institute of Geology of Bern University. "The intensification of glacial melting strongly affects the quantity and seasonal distribution of water. Initially, the retreat of glaciers is going to increase the available water resources, but if precipitation doesn't compensate for the losses related to glacial retreat, the reduction of glacier volume will eventually reduce the amount of available water."

The researchers proceeded to analyze a series of measurements based on many parameters related to climate, glaciers, and streamflow in order to compare this data with existing information. Although these studies have revealed a clear tendency toward a reduction in streamflow during the summer, the impact of melting glaciers on the annual flow remains unclear. "Many factors can have an influence on water quantity," explains Annina Sorg. "Precipitation level, evaporation, and even human interference on the hydrological cycle are all factors to consider."

The scenarios envisioned by the Intergovernmental Panel on Climate Change (IPCC) predict a 4% to 8% increase in winter precipitation in Central Asia by 2050. Summer precipitation, however, will decrease by 4% to 7%, which will exacerbate the drought during the summer. Especially since, according to estimates, temperatures could rise by almost 4°C in the next forty years.

According to projections, the Tien Shan Mountain glaciers will continue to lose their surface and volume in the coming decades.

In summary, certain Central Asian streams would move from a glacio-nival hydrological regime to a pluvio-nival regime, which would increas uncertainty regarding interannual variations in water levels, since they would be largely dependent on precipitation. Economic and political tensions in this area of the world would be added to the potentially disastrous environmental consequences.

The ACQWA project
ACQWA (Assessing Climate Impacts on the Quantity and quality of WAter, 2008-2013) is a European project which aims to quantify the influence of climatic change on river discharge and to analyse the impact on society and economy in mountainous regions such as the Alps, the Andes and the Tien Shan mountains. Coordinated by professor Martin Beniston and his team at the UNIGE, ACQWA gathers 35 research teams in Europe, Central Asia and South America and benefits from a 11 million swiss francs budget. www.acqwa.ch