Pandemic Strikes, Threat To Humans: An Avian Flu That Jumps From Birds To Mammals Is Killing New England's Baby Seals

A novel avian influenza virus has acquired the ability to infect aquatic mammals and was responsible for an outbreak of fatal pneumonia that recently struck harbor seals in New England, according to scientists at the Center for Infection & Immunity (CII) at Columbia University's Mailman School of Public Health, the National Oceanic and Atmospheric Association, New England Aquarium, USGS National Wildlife Health Center, SeaWorld and EcoHealth Alliance.

A new strain of influenza virus found in harbor seals could represent a threat to wildlife and human health, according to the authors of a study appearing July 31 in mBio®, the online open-access journal of the American Society for Microbiology. It is crucial to monitor viruses like this one, which originated in birds and adapted to infect mammals, the authors say, so that scientists can better predict the emergence of new strains of influenza and prevent pandemics in the future. 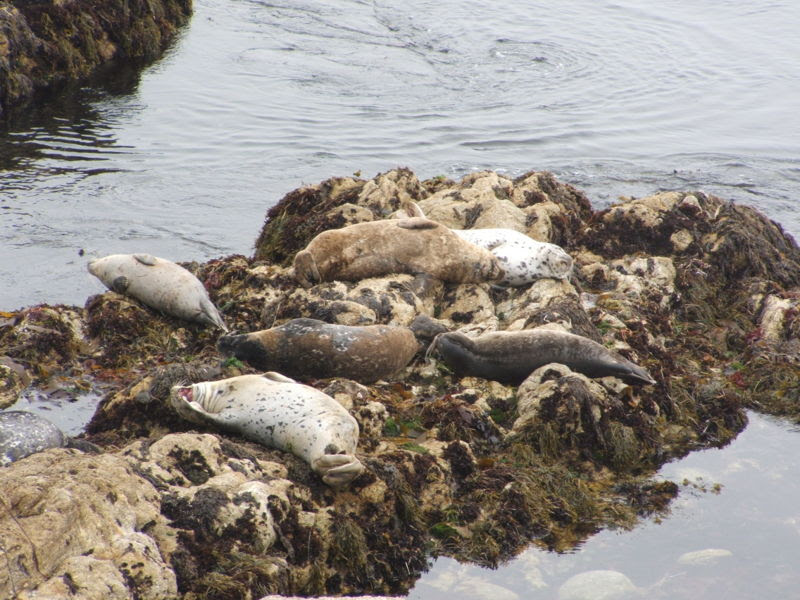 "There is a concern that we have a new mammalian-transmissible virus to which humans haven't been exposed yet. It's a combination we haven't seen in disease before," says Anne Moscona of Weill Cornell Medical College in New York City, the editor of the report.

The authors, who hail from several different institutions, including Columbia University and the National Oceanic and Atmospheric Administration Outbreaks, say transmissible and pathogenic flu viruses in mammals, like the one in this study, clearly pose a concern for human health. In 2009, for instance, the H1N1 "swine flu" virus that emerged in humans apparently originated from a reassortment of flu viruses found in birds, pigs, and humans. The H3N8 strain in New England harbor seals may come to represent the first sighting of a new group of influenza viruses with the potential to persist and move between species.

The mBio® study analyzed the DNA of a virus associated with a die-off of 162 New England harbor seals in 2011. Autopsies of five of the seals revealed they apparently died from infection with a type of influenza called H3N8, which is closely related to a flu strain that has been circulating in North American birds since 2002. Unlike the strain in birds, this virus has adaptations to living in mammals and has mutations that are known to make flu viruses more transmissible and cause more severe disease. The virus also has the ability to target a receptor called SAα-2,6, a protein found in the human respiratory tract.

Moscana says the study raises two concerns about flu. First, this strain is a novel virus that infects mammals and may well pass from animal to animal, a combination of traits that make it a potential threat to humans. Also, the possibility that a bird flu virus would infect seals hadn't been widely considered before, highlighting the fact that pandemic influenza can crop up in unexpected ways. She emphasizes the need for readiness.

"Flu could emerge from anywhere and our readiness has to be much better than we previously realized. We need to be very nimble in our ability to identify and understand the potential risks posed by new viruses emerging from unexpected sources," says Moscona. "It's important to realize that viruses can emerge through routes that we haven't considered. We need to be alert to those risks and ready to act on them."This research is published in mBio.
Wildlife officials first became concerned in September 2011, when seals with severe pneumonia and skin lesions suddenly appeared along the coastline from southern Maine to northern Massachusetts. Most were infants (less than 6 months), and a total of 162 dead or moribund seals were recovered over the next 3 months.

Pathogen screening was conducted in a subset of afflicted seals, using sensitive diagnostic tools developed at the CII, and a new strain of avian H3N8 influenza virus was identified as a culprit.

"When initial tests revealed an avian influenza virus, we asked the obvious question: how did this virus jump from birds to seals?" says Simon Anthony, D.Phil, postdoctoral research scientist at the CII and the lead author of the study.

Based on full genome sequencing and phylogenetic analysis, seal H3N8 descended from an avian strain that has been circulating in North American waterfowl since 2002, which implies recent transmission from wild birds to seals.

Accordingly, seal H3N8 has acquired the ability to bind sialic acid receptors that are commonly found in the mammalian respiratory tract. Mutations in the HA and PB2 genes – required for cell entry and replication, respectively – suggest enhanced virulence and transmission in mammals, but these putative attributes require further investigation. Given these findings along with the long history of the spread of avian influenza to humans—most notably H1N1 and H5N1—seal H3N8 could pose a threat to public health.

"Our findings reinforce the importance of wildlife surveillance in predicting and preventing pandemics, says W. Ian Lipkin, director of the Center for Infection and Immunity and John Snow Professor of Epidemiology, at the Mailman School of Public Health. "HIV/AIDS, SARS, West Nile, Nipah and influenza are all examples of emerging infectious diseases that originated in animals. Any outbreak of disease in domestic animals or wildlife, while an immediate threat to wildlife conservation, must also be considered potentially hazardous to humans."