A new study of renewable energy’s technical potential finds that every state in the nation has the space and resource to generate clean energy.

The U.S. Department of Energy’s National Renewable Energy Laboratory produced the study, U.S. RE Technical Potential, which looks at available renewable resources in each state. It establishes an upper-boundary estimate of development potential. Economic or market restraints would factor into what projects might actually be deployed.

The report is valuable for decision-makers and utility executives because it compares estimates across six renewable energy technologies and unifies assumptions and methods. It shows the achievable energy generation of a particular technology given resource availability – solar, wind, geothermal availability, etc. -- system performance, topographic limitations, and environmental and land-use constraints. 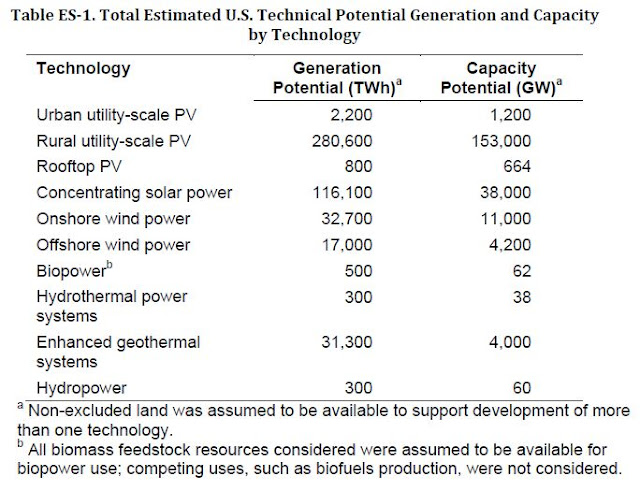 "Decision-makers using the study will get a sense of scale regarding the potential for renewables, and which technologies are worth examining," said NREL’s Anthony Lopez, a co-author of the study. "Energy modelers also will find the study valuable."

“This is intended to be a living document,” NREL’s Donna Heimiller, another co-author, added. “We’ll be frequently updating the information as we get more data.”

Utility-Scale Photovoltaics (Urban)
NREL defines urban utility-scale photovoltaics (PV) as large-scale PV deployed within urban boundaries on urban open space. The process for generating technical estimates for urban utility-scale PV begins with excluding areas not suitable for this technology. We first limit areas to those within urbanized area boundaries as defined by the U.S. Census Bureau (ESRI 2004) and further limit these areas to those with slopes less than or equal to 3%. Parking lots, roads, and urbanized areas are excluded by identifying areas with imperviousness greater than or equal to 1% (MRLC n.d.). Additional exclusions (Table A-1) are applied to eliminate areas deemed unlikely for development. The remaining land is grouped into contiguous areas and areas less than 18,000 square meters (m2) are removed to ensure that total system size is large enough to be considered a utility-scale project.  This process produces a data set representative of the final available urban open space suitable for PV development. We obtain state-level annual capacity factors using the National Solar Radiation Database Typical Meteorological Year 3 (TMY3) data set (Wilcox, 2007; Wilcox and Marion, 2008) (Table A-2) and the SAM model. The PV system assumed in this analysis was a 1-axis tracking collector with the axis of rotation aligned north-south at 0 degrees tilt from the horizontal, which has a power density of 48 MW per square kilometer (MW/km2) 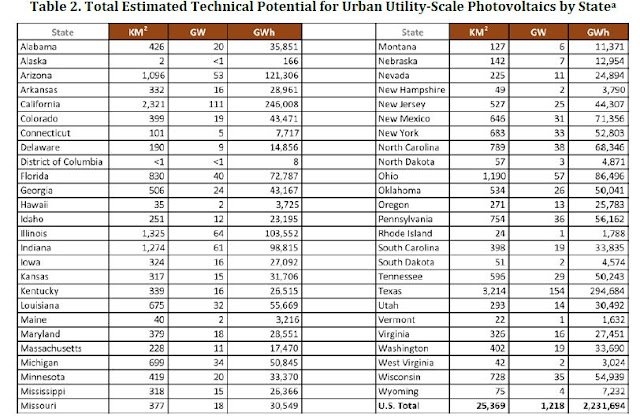 For more information go to the NREL website: http://www.nrel.gov/gis/re_potential.html.

NREL is the U.S. Department of Energy's primary national laboratory for renewable energy and energy efficiency research and development. NREL is operated for DOE by the Alliance for Sustainable Energy, LLC.
on July 30, 2012