The mysterious explosion that occurred in the early morning on June 30, 1908 near the Stony Tunguska River, has been haunting the researchers for over a hundred years. Recently, a group of experts from the University of Bologna found a strange anomaly in the center of Lake Cheko, located eight kilometers from the epicenter of the explosion that may be a fragment of a celestial body. 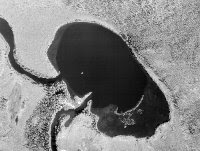 Tunguska is the common name of the three major tributaries of the Yenisei: The Upper (Angara), Medium (Stony) and Lower. In the area near the village of Stony Tunguska near the village of Vanavara on June 30, 1908 around 7:00 am a big fireball was seen, overflying the territory of the Yenisei River basin from the southeast to the northwest (on an alternative testimony, the body was cylindrical in shape). The flight ended with a deafening booming explosion over the taiga at seven to ten kilometers above the ground.

Trees knocked over by the Tunguska blast.

A powerful blast wave was recorded by observatories around the world. A flash of light was observed at a great distance - the ball has become a pillar of fire at about 20 kilometers altitude. On the territory of more than two thousand kilometers trees were knocked down and in houses, located hundreds of kilometers from the epicenter of the explosion, windows were blown out.

The Southern swamp—the epicenter of the Tunguska explosion, in 2008

Ironically, within 13 years no one dared to carry out studies on the site of the explosion. Only in 1921, a romantic enthusiast, a member of the Mineralogical Museum in Moscow, Leonid A. Kulik, accidentally learned about the Tunguska mystery from an old sheet tear-off calendar, and his interest was sparked. With the support of Academicians Vernadsky and Fersman, he organized the first expedition to the area of ​​Stony Tunguska.

Kulik and his companions gathered over 230 fragments weighing over 200 pounds. But these were the fragments of meteorites that fell earlier in the taiga. In addition, the expedition found microscopic silicate and magnetite pellets and fragments of rock with a high content of elements, indicating a possible cosmic origin of the substance. However, it has not been established whether they were remnants of the above events.

Today there are about 120 scientific, pseudo-scientific and pseudoscientific hypotheses explaining the nature of the Tunguska phenomenon. The most common of them is the fall of the meteorite (presumably iron) or passing meteor swarm - was quickly called into question because meteorite fragments have not been found.

Despite the doubts in meteorite nature of the explosion, the enthusiasts continued to search for a crater (or craters) in the area of the suggested epicenter, and not without success.

For example, in 1994 participants of the research association "Kosmopoisk" Romeiko managed to make a successful aerial Stony Tunguska region. The pictures clearly show the outlines of a mysterious lake, located a few dozens of kilometers from the epicenter of the alleged explosion.

The lake is of round shape, and its area is 200 to 250 meters. The shores of the reservoir are covered by forest, where some trees are felled. Since Taiga is difficult to pass in that area, the place had previously been virtually unknown. According to the hypothesis of Romeiko, it is a water-filled crater of meteoritic origin.

Researchers from Bologna led by a specialist in marine geology Luca Gasperini ran into another "crater" in 2007. The Italians drew attention to the taiga Lake Cheko that lies eight kilometers north-west of the alleged epicenter of the explosion. The location of the reservoir coincides with the flight path of a giant body that later without good grounds became known as the Tunguska meteorite. It is interesting that Lake Cheko is not observed on any map made before 1929, and according to the testimony of local residents, prior to the crash in 1908 it simply did not exist.

Under The project "Tunguska 99," Gasperini and his colleagues conducted a study of the lake on the ground. First of all, they were struck by its nearly hemispherical form. It was also found that the bottom of the reservoir has the shape of a cone, and its maximum depth is about 50 meters. This may indicate that something huge had struck the tunnel at this point and sank into the ground. Indeed, the ground penetrating radar recorded a large object at a depth of 10 meters below the bottom of the lake.

The Italian scientists suggest that the "culprit" was a fragment of an exploded cosmic body. The weight of the "fragment" is about 1,5 × 106 kilograms.

Yet, the discovered "craters" are still just a speculation. To date, no object was found in the Stony Tunguska that would clearly indicate that they are relevant to the old events.

Read the original in Russian