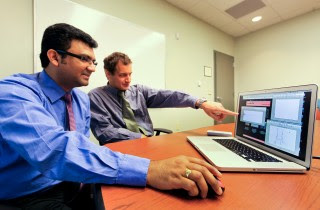 “Advanced simulation technology -- and the RCSim technology in particular -- provides a watershed opportunity for industrial wireless networks to be used in a revolutionary new way,” ORNL researcher Kuruganti said.

The technology, developed by Kuruganti and Nutaro, is the first that can use the three-dimensional models of an industrial facility to simulate wireless networks. The simulator uses an algorithm that quickly calculates the time delay and power of every radio signal delivered to a particular site, allowing it to predict radio signal strength with greater accuracy than competing products throughout geometrically complex environments.

“Unlike other products, this simulator enables vendors of industrial wireless networks to identify coverage problems before deploying a network,” Nutaro said. “It can reduce the need for expensive wireless surveys, lower the quantity and cost of deployed hardware and improve the accuracy of cost estimates quoted by vendors--reducing the installation and operational costs associated with wireless networks.”

In addition to simulating mobile receivers in urban networks, RCSim can be used for the simulation of tactical wireless networks used in urban police and combat operations, with potential benefit to emergency responders or the military.

Networcsim has already completed its first commercial prototype and is negotiating for distribution rights to the software that will enable the cost-effective design of wireless networks for use in industrial environments. The development of RCSim was funded through ORNL’s Laboratory Directed Research and Development program.

UT-Battelle manages ORNL for the Department of Energy’s Office of Science. The Office of Science is the single largest supporter of basic research in the physical sciences in the United States and is working to address some of the most pressing challenges of our time. For more information, please visit http://science.energy.gov/.
on July 28, 2012