For millions of people around the world being sick doesn't mean making a trip to the local pharmacy for medicines like Advil and Nyquil. Instead it means turning to the forest to provide a pharmacopeia of medicines to treat everything from tooth aches to chest pains.

But while questions persist about whether such natural remedies are as effective as their pharmacological cousins, one Harvard researcher is examining the phenomenon from a unique perspective, and trying to understand the economic benefits people receive by relying on such traditional cures.

Pygeum is not only used in traditional African medicine, but has developed a following around the world, as a cure for mild-to-moderate benign prostatic hyperplasia, claimed by its users to increase the ease of urination and reduce inflammation and cholesterol deposits. In traditional African practice, the bark is made into tea, whereas elsewhere in the world it is found in powders, tinctures, and pills. Pygeum has been sold in Europe since the 1970s and is harvested in mass quantities in Cameroon and Madagascar each year 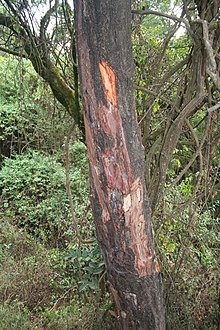 Securidaca Longepedunculata: This is a tropical plant found almost everywhere across the continent with different uses in every part of Africa. In Tanzania, the dried bark and root are used as a laxative for nervous system disorders, with one cup of the mixture being taken daily for two weeks. In East Africa, dried leaves from the plant are used in the treatment of wounds and sores, coughs, venereal diseases, and snakebites. In Malawi, the leaves are also used for wounds, coughs, venereal diseases, and snakebites, as well as bilharzia, and the dried leaves are used to cure headaches. In other parts of the continent, parts of the plant are used to cure skin diseases, malaria, impotence, epilepsy, and are also used

As reported in a paper published this week in PLoS ONE, Christopher Golden, '05, a Post-Doctoral Fellow at the Harvard University Center for the Environment has found that, in the area of northwest Madagascar he studies, people annually receive between $5 and $8 in benefits by using natural medicines.

Though seemingly slight, those benefits add up to between $30 and $45 per household, Golden said, or anywhere from 43 to 63 percent of the median annual income for families in the region.

"We documented people using more than 240 different plant species to treat as many as 82 different illnesses," Golden said. "This data suggests that it can have quite an impact, financially."

It's an impact that may not be limited to Madagascar, or other regions where access to pharmaceuticals is limited.

As part of his analysis, Golden also compared the use of natural remedies with the prices that American consumers might pay if they were purchasing the pharmaceutical equivalent online – where prices are typically lower than on pharmacy shelves. To his surprise, the results showed that the average American could save anywhere from 22 to 63 percent of their annual health care bill, simply by using natural medicines.

"If Americans were relying on traditional medicines as much as people in Madagascar, it could save them a major percentage of their health care expenditures," Golden said.

Golden, however, was quick to emphasize that his study only examined the economics of the natural remedies versus pharmaceuticals, not whether they were equally effective.

"What we're trying to do is account for the economic value the local floral bio-diversity provides to people in this area of Madagascar," Golden said. "We're not assuming there is a medical equivalency – this study is about the perceived efficacy. The people who live in this region often have taken both pharmaceuticals and traditional medicines many times, but there is a perceived efficacy for these traditional medicines."

Measuring that perceived efficacy involved surveying 1,200 households in and around Maroantsetra, a city in the northeast corner of the island nation, to determine which natural medicines they used.

To establish the economic benefit of each natural remedy, Golden asked whether people would prefer to use the natural or pharmaceutical remedy for a given illness. If, for example, 60 percent of those asked said they preferred the traditional medicine, Golden established its value as being 60 percent of the price of its pharmaceutical cousin.

"Certainly, because there's no proof of medical equivalency between these treatments, it could easily be an over-estimation to establish these values," Golden said. "But the bio-diversity in these regions represents a huge pharmacopeia, and there are many hidden benefits to the use of these sorts of traditional medicines. These medicines aren't being improperly prescribed or mismanaged, and because they've been used for millennia, we know they're not producing any type of negative side effects."

The economic benefits offered by natural medicines, however, may not end at those who rely on them to treat day-to-day ailments.

The corner of Madagascar that Golden studied contains nearly one percent of all the global floral biodiversity, meaning the chance that a novel pharmaceutical might be developed based on the traditional medicines used in the area is relatively high. The value of that drug, Golden said, could range from $300 million to as much as $5.7 billion.

"That raises additional issues, about who benefits from the discovery of these drugs," Golden said. "In the case of the Madagascar Periwinkle, which was used to develop the treatment for childhood leukemia, a foreign drug company came, took the plants to a foreign lab and they are now making billions, but not five cents has made its way back to Madagascar."

While the question of their medical efficacy is still to be answered, Golden knows first-hand why people continue to rely on traditional medicines – in at least some cases, they work.

"I have been living here long enough that I've used some of these remedies myself," Golden said. "In one case, some scratches on my leg got infected, and it blew up like a watermelon from my knee to my ankle. My host family went into the forest and came back with what looked like nettles and put them on my leg. It was incredibly itchy, but the swelling went away completely and the pain disappeared. So these treatments really can work."