The Later Stone Age emerged in South Africa more than 20,000 years earlier than previously believed -- about the same time humans were migrating from Africa to the European continent, says a new international study led by the University of Colorado Boulder.

The study shows the onset of the Later Stone Age in South Africa likely began some 44,000 to 42,000 years ago, said Paola Villa, a curator at the University of Colorado Museum of Natural History and lead study author. The new dates are based on the use of precisely calibrated radiocarbon dates linked to organic artifacts found at Border Cave in the Lebombo Mountains on the border of South Africa and Swaziland containing evidence of hominid occupation going back 200,000 years.

The Later Stone Age is synonymous to many archaeologists with the Upper Paleolithic Period, when modern humans moved from Africa into Europe roughly 45,000 years ago and spread rapidly, displacing and eventually driving Neanderthals to extinction. The timing of the technological innovations and changes in the Later Stone Age in South Africa are comparable to that of the Upper Paleolithic, said Villa.

“Our research proves that the Later Stone Age emerged in South Africa far earlier than has been believed and occurred at about the same time as the arrival of modern humans in Europe,” said Villa. “But differences in technology and culture between the two areas are very strong, showing the people of the two regions chose very different paths to the evolution of technology and society.”

Objects found in the archaeological site called Border Cave include a) a wooden digging stick; b) a wooden poison applicator; c) a bone arrow point decorated with a spiral incision filled with red pigment; d) a bone object with four sets of notches; e) a lump of beeswax; and f) ostrich eggshell beads and marine shell beads used as personal ornaments. 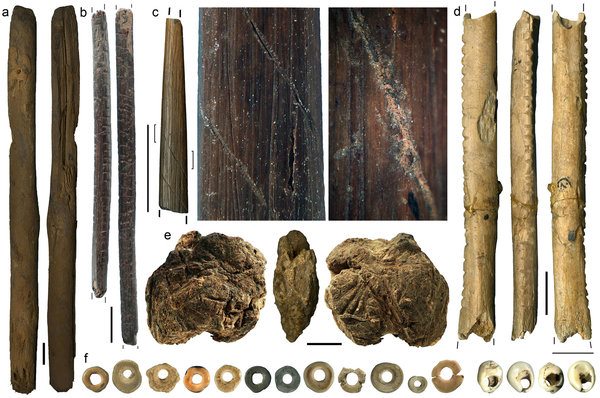 A companion paper published in PNAS and led by d’Errico reports on organic materials found at Border Cave dating to the Later Stone Age, an indication that the San hunter-gatherer culture first thought to have begun about 20,000 years ago in the region probably emerged as early as 44,000 years ago, said Villa.

Organic artifact assemblages at Border Cave dating to the Later Stone Age included ostrich eggshell beads, thin bone arrowhead points, wooden digging sticks, a gummy substance called pitch that was used to haft, or attach, bone and stone blades to shafts and a lump of beeswax likely used for hafting. The assemblage also included worked tusks of members of the pig family, which likely were used to plane wood, and notched bones that may have been used for counting.

A wooden digging stick from Border Cave dated to about 40,000 years ago was found in association with bored but broken stones likely used to weight such sticks. The sticks and stone weights are similar to digging implements used by women of the prehistoric San hunter-gatherer culture in the region to unearth bulbs and termite larvae, a practice that continued into historic times, said Villa. “These digging sticks from Border Cave are the oldest artifacts of this kind known from South Africa or anywhere else in Africa.”

The new PNAS study led by Villa also indicates big changes were occurring in hunting technology during the Later Stone Age at Border Cave, said Villa. They included a shift from spears hafted with stone points -- the main hunting weapon in the Middle Stone Age -- to the likely use of the bow and arrow, a technology that included very thin bone points that probably were tipped with poison, she said.

“The very thin bone points from the Later Stone Age at Border Cave are good evidence for bow and arrow use,” said Villa. “The work by d’Errico and colleagues shows that the points are very similar in width and thickness to the bone points produced by San culture that occupied the region in prehistoric times, whose people were known to use bows and arrows with poison-tipped bone points as a way to bring down medium and large-sized herbivores.”

Chemical analyses showed the poison used with such bone points was most likely ricinoleic acid, which can be derived from the seeds of castor oil plants and which has been identified as being used in South Africa at least 24,000 years ago. “Such bone points could have penetrated thick hides, but the lack of ‘knock-down’ power means the use of poison probably was a requirement for successful kills,” said Villa.

The lump of beeswax from Border Cave also dating to about 40,000 years ago -- the oldest known beeswax used by humans ever discovered -- was wrapped in plant fibers that may have been similar to fibers used to make the strings for hunting bows, said Villa.

While stone tools continued to be manufactured in the Later Stone Age at Border Cave, stone spear points from the Middle Stone Age gave way to tiny, thin flakes known as microliths that were probably hafted on shafts, much like the bone points, with pitch made from the bark of a common type of coniferous tree found in the region.

While a 2011 study co-authored by Villa and Wil Roebroeks of Leiden University in the Netherlands showed that Neanderthals mastered the manufacture of pitch in Europe 200,000 years ago, it was not a particularly simple task since the process involved burning peeled bark in the absence of air, said Villa. The Later Stone Age inhabitants of South Africa probably dug holes into the ground and inserted bark peels, then lit them on fire and covered the holes tightly with stones. “This is the first time pitch-making is demonstrated in South Africa,” said Villa.

Villa said that a fundamental rearrangement of human behavior that had its beginnings 50,000-60,000 years ago in Africa and spread to Europe -- an idea first proposed by Stanford University archaeologist Richard Klein -- appears quite plausible.