Landsat Top Ten - Beijing: The Rise of an Economic Superpower

The Chinese capital of Beijing as seen by Landsat 3 in 1978 and Landsat 5 in 2010. In 1978, the image was acquired by Landsat 3's Multispectral Scanner System instrument on June 21, capturing the green, red and near-infrared bands. These same bands are visible in the 2010 image, captured on August 8 by the Thematic Mapper instrument aboard Landsat 5.
Credit: NASA

Beijing is one of the oldest, and now, one of the most densely populated cities in the world. In this animation of Landsat images from 1972 to 2010, the explosive growth of this ancient city is clearly visible. In 1972, Beijing's population was about 7.9 million people. By 2010 the population swelled to more than 12 million. The success of economic reforms beginning in the 1970s fueled the dramatic growth.

The 30-meter resolution of Landsat scenes is ideal for portraying a view of this and other cities as they grow and change. Landsat's 40-year-long record can be used like a time machine, allowing viewers to jump back years or even decades to compare one period of a city's life to another.

"In these views of Beijing, Landsat tracks not only an impressive example of global urban growth, but also the footprints of social and political change," says Tom Loveland, a scientist with the U.S. Geological Survey (USGS) Earth Resources Observation and Science (EROS) Center in Sioux Falls, S.D.

In the late 1970s, the Chinese communist leadership began to embrace market-oriented economic reform. The ensuing economic boom caused the city to expand rapidly. In the 1980s, a series of 'ring roads' were added that encircle the city.

This economic openness led some to agitate for political reforms and in 1989 there were mass demonstrations in the city's center at Tiananmen Square near the Forbidden City area. In the 1990s, the Chinese government gradually opened up its political system to continuing economic reforms. These efforts were rewarded internationally in 2001 when the International Olympic Committee chose Beijing as the host for the 2008 Summer Olympics. 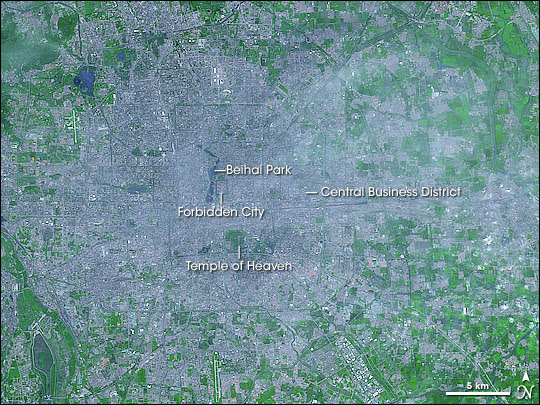 China's economic reforms have resulted in a vast and sudden expansion of Beijing. Today a total of six ring roads loop around the city center, separating regions of the city by specialties, like flourishing shopping areas, a financial district and a major electronics center. To the west and northwest of the city runs the rugged Taihang Mountains, and so the city's spread is more vigorous to the south and east across the relatively flat coastal plain.

This expansion stands in strict contrast to the Beijing of the 1970s and before. Up until 1979, the government restricted housing in the city, limiting it to the confines of the "Outer City." Previously a walled fortress, its outline is still visible today due to the creation of canals and roads along the path of the original wall. Inside this rectangular boundary is the ancient heart of the capital, the moat-lined Forbidden City. This is where the Imperial Palace still stands, once home to 500 years of Chinese emperors.

Beijing was established as a city in 1045 B.C. King Wu was the first to declare the city as a capital in 1057 B.C. It was Kublai Khan who established the Forbidden City in 1260 A.D. It still stands as Beijing's city center. In 1421 the Chinese took the city back and gave it its current name of Beijing. Having served as the capital of the Liao, Jin, Yuan, Ming and Qing Dynasties, this modern metropolis is now the capital of the People's Republic of China.

NASA and the U.S. Department of the Interior through the U.S. Geological Survey (USGS) jointly manage Landsat, and the USGS preserves a 40-year archive of Landsat images that is freely available over the Internet. The next Landsat satellite, now known as the Landsat Data Continuity Mission (LDCM) and later to be called Landsat 8, is scheduled for launch in 2013.