The galaxy NGC 4700 bears the signs of the vigorous birth of many new stars in this image captured by the NASA/ESA Hubble Space Telescope.

The many bright, pinkish clouds in NGC 4700 are known as H II regions, where intense ultraviolet light from hot young stars is causing nearby hydrogen gas to glow. H II regions often come part-and-parcel with the vast molecular clouds that spawn fresh stars, thus giving rise to the locally-ionized gas. 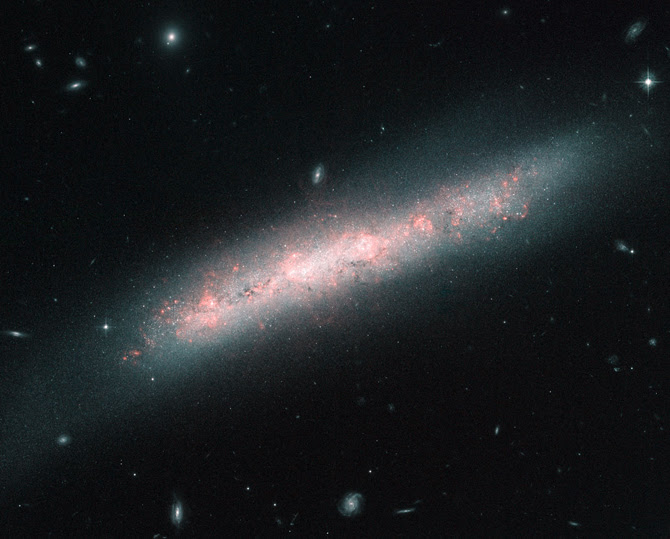 In 1610, French astronomer Nicolas-Claude Fabri de Peiresc peered through a telescope and found what turned out to be the first H II region on record: the Orion Nebula, located relatively close to our Solar System here in the Milky Way. Astronomers study these regions throughout the Milky Way and those easily seen in other galaxies to gauge the chemical makeup of cosmic environments and their influence on the formation of stars.

NGC 4700 appears to be an edge-on galaxy. It was discovered back in March 1786 by the British astronomer William Herschel who noted it as a "very faint nebula." NGC 4700, along with many other relatively close galaxies, is found in the constellation of Virgo (The Virgin) and is classified as a barred spiral galaxy, similar in structure to the Milky Way. It lies about 50 million light-years from us and is moving away from us at about 1400 km/second due to the expansion of the Universe.