Airplane passengers can count on their flights being safer and more reliable across North America now that scientists have begun using data determined with NASA formulas to get a more accurate representation of clouds in weather forecast models.

"Clouds are an important factor to consider when planning a flight," says Patrick Minnis, a scientist at NASA's Langley Research Center in Hampton, Va. whose team provided the enhanced cloud information to weather models. "They are associated with severe storms, aircraft icing, turbulence, lightning and other aviation hazards."

This image is a false color image to make it easy to distinguish between clouds and snow (deep pink) and between low clouds (peach and tan) and high clouds (gray and pink). The CERES analysis methods applied to that image give a variety of cloud properties including cloud top height. 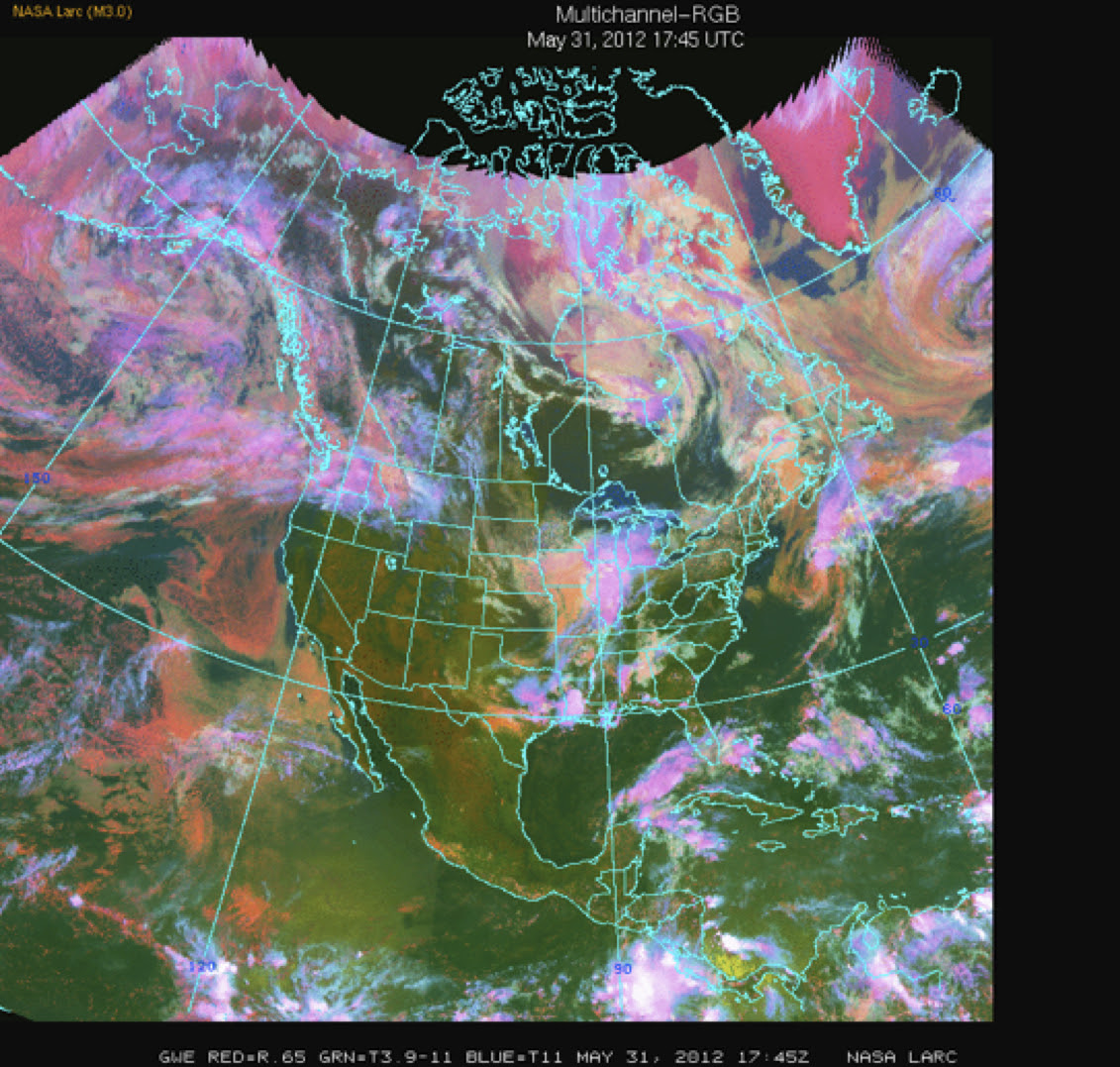 The result of the fusion is new and improved cloud information, which is now being fed into forecasts produced by NOAA's National Weather Service (NWS) in near-real time – every hour.

"Our users, which include aviation, severe weather, energy and general forecasting, have a significant need for weather guidance on what will happen in the next 2 to 18 hours," says Stan Benjamin, the Assimilation and Modeling Branch chief within NOAA’s Earth System Research Laboratory (ESRL), an office of atmospheric researchers who work with several other labs and agencies, including NWS, to develop new, advanced weather models.

"We increase skill of weather models in an ongoing basis by improving methods to assimilate observations for the model initial conditions and improving the models themselves to better represent the actual atmospheric processes," Benjamin says.

Scientists found that the previous weather forecasts anticipated too much tropical convection and too few clouds over Canada.

"We are now providing better information on cloud ceiling and top heights, which help the forecast model place clouds more accurately on the map. In addition, we measure the amount of water in the clouds and determine if that water is liquid or ice," says Minnis.

Cloud ceiling heights also tell aviation forecasters how far from the ground certain clouds are. When clouds are too low, pilots have difficulty landing planes.

Minnis has been working with GOES data since 1978, and he says one of his goals has always been to get cloud information into weather prediction models. Under the sponsorship of the NASA Applied Sciences Program, Minnis and his colleagues have been able to work with NOAA/ESRL to do just that.

These weather models are collecting information not only from satellites, but also from commercial airplanes, radars, wind profilers, weather balloons, surface stations and others. The cloud products from NASA are one of 25 different types of observations that the model uses to improve short-term forecasts that simulate what is happening in the atmosphere.

As a result from improved NOAA weather model guidance, including help from NASA science collaboration, air travelers benefit from improved safety in both summer and winter and improved on-time performance that is less vulnerable to weather-related delays.