A flexible electronic sensor made from interlocking hairs can detect the gentle steps of a ladybird and distinguish between shear and twisting forces, just as human skin can. It can also be strapped to the wrist and used as a heart-rate monitor.

The sensor's design, described today in Nature Materials1, was inspired by beetle wing-locking structures, says Kahp-Yang Suh, an engineer at Seoul National University. When some beetles are resting, a row of hairs on their wings locks into an array of hairs on their body through a type of static attraction called van der Waals' forces. In Suh’s sensors, the 'hairs' are sheets of polymer fibres that are 100 nanometres in diameter and one micrometre long, and coated with metal to make them electrically conductive. When the sheets are sandwiched together, the nanohairs are attracted to one another and locked in, just like the beetle hairs. The device is then wired up so that an electrical current can be applied, and covered in a layer of soft, protective polymer. 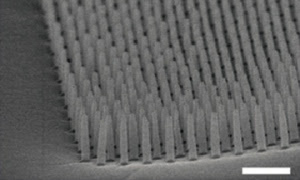 When the sensor sheet is pressed, twisted or brushed, the squishy, metal-coated hairs change position, generating changes in the sensor’s electrical resistance. The design is sensitive to pressures of just five pascals — gentler than the lightest of touches. By analysing how the resistance changes in response to mechanical stress and then recovers when the stress is removed, Suh and his colleagues can distinguish between three types of mechanical strain: pressure, which comes straight down on the sensor; shear, a frictional slide along the surface; and torsion, a twisting motion. “We can decouple these three signals,” says Suh.

Human skin can distinguish between these types of strain, but most artificial sensors cannot. “Sensing shear and torsion is difficult,” says Zhenan Bao, a materials scientist at Stanford University in Palo Alto, California, who is developing other flexible strain sensors. Other sensors detect only the total applied force, they can't say anything about its direction, says Suh. The methods for teasing out the nature of the strain from the electrical readings in Suh’s sensors need some work, says Bao, but getting this type of information from a flexible sensor is unique.

Such subtle tactile input would be very useful for robots designed to interact with people, says Matei Ciocarlie, a scientist at Willow Garage, a robotics company in Menlo Park, California. Cameras can provide a lot of information about the environment, but sometimes they get blocked, and they tend to get overloaded with information. Tactile sensors, however, collect data only at the point of contact and cannot be blocked.

“Skin has been an overlooked part of robotics”, says Ciocarlie, because it poses such a challenging problem: in addition to being robust, sensitive and flexible, it needs to be made in very large sheets. Suh says that it should be simple and inexpensive to make large sheets of his sensor by making large moulds.

Electronic skin also needs high spatial resolution to pinpoint where on the surface the pressure is being applied. Suh’s group demonstrated their device's resolution by using an 8-by-5 centimetre sensor network made up of 64 pixels to track the meandering of two ladybirds along its surface. They also recorded the path of a bouncing water droplet and showed that the sensor sheets could measure someone’s pulse when strapped to his or her wrist. Suh says that his group is now talking to a health-care company about developing heart monitors using his material.Nature doi:10.1038/nature.2012.11081