The trajectory correction maneuver completed late Saturday may be the last one the mission needs before landing day, though two further opportunities remain on its schedule in case they are needed.

This is an artist's concept of NASA's Mars Science Laboratory spacecraft during its cruise phase between launch and final approach to Mars. 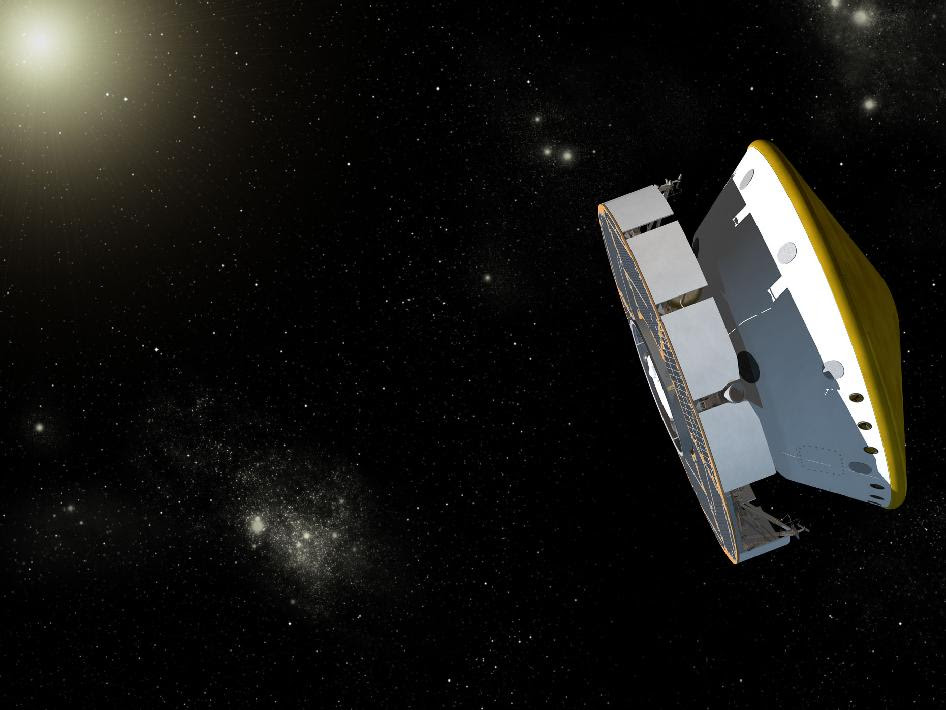 The spacecraft is on course for delivering the mission's car-size rover, Curiosity, to a landing target beside a Martian mountain at about 10:31 p.m. PDT on Aug. 5. (1:31 a.m. on Aug. 6, EDT). After landing, the rover will spend a two-year prime mission studying whether the area has ever offered environmental conditions favorable for life.

The spacecraft used two brief thruster firings totaling about 7 seconds to adjust its trajectory at about 10 p.m. PDT on July 28 (1 a.m. on July 29, EDT). This maneuver had been on the mission's schedule since before launch on Nov. 26, 2011. It altered the flight path less than any of the spacecraft's three previous trajectory correction maneuvers on the way from Earth to Mars.

The Mars Science Laboratory spacecraft had been on a course in recent weeks that would have hit a point at the top of the Martian atmosphere about 13 miles (21 kilometers) east of the target entry point. On landing day, it can steer enough during its flight through the upper atmosphere to correct for missing the target entry point by a few miles and still land on the intended patch of Mars real estate. The mission's engineers and managers rated the projected 13-mile miss big enough to warrant a correction maneuver.

"The purpose of this maneuver is to move the point at which Curiosity enters the atmosphere by about 13 miles," said Tomas Martin-Mur of NASA's Jet Propulsion Laboratory, Pasadena, Calif., chief of the mission's navigation team. "The first look at telemetry and tracking data afterwards indicates the maneuver succeeded as planned."

The thruster firings altered the spacecraft's velocity by about one-fortieth of one mile per hour (one centimeter per second). Curiosity will enter Mars' atmosphere at a speed of about 13,200 mph (5,900 meters per second).

Opportunities for two further course corrections are scheduled in the final 48 hours before landing, if needed.

"I will not be surprised if this was our last trajectory correction maneuver," Martin Mur said of Saturday's event. "We will be monitoring the trajectory using the antennas of the Deep Space Network to be sure Curiosity is staying on the right path for a successful entry, descent and landing."

Descent from the top of Mars' atmosphere to the surface will employ bold techniques enabling use of a smaller target area and heavier landed payload than were possible for any previous Mars mission. These innovations, if successful, will place a well-equipped mobile laboratory into a locale especially well-suited for its mission of discovery. The same innovations advance NASA toward capabilities needed for human missions to Mars.

As of July 30, the Mars Science Laboratory spacecraft carrying the rover Curiosity will have traveled about 343 million miles (555 million kilometers) of its 352-million-mile (567-million-kilometer) flight to Mars.

JPL, a division of the California Institute of Technology in Pasadena, manages the mission for the NASA Science Mission Directorate, Washington. More information about Curiosity is online at http://www.nasa.gov/msl and http://mars.jpl.nasa.gov/msl/ .