The chronic drought that hit western North America from 2000 to 2004 left dying forests and depleted river basins in its wake and was the strongest in 800 years, scientists have concluded, but they say those conditions will become the "new normal" for most of the coming century.

Such climatic extremes have increased as a result of global warming, a group of 10 researchers reported today in Nature Geoscience. And as bad as conditions were during the 2000-04 drought, they may eventually be seen as the good old days. 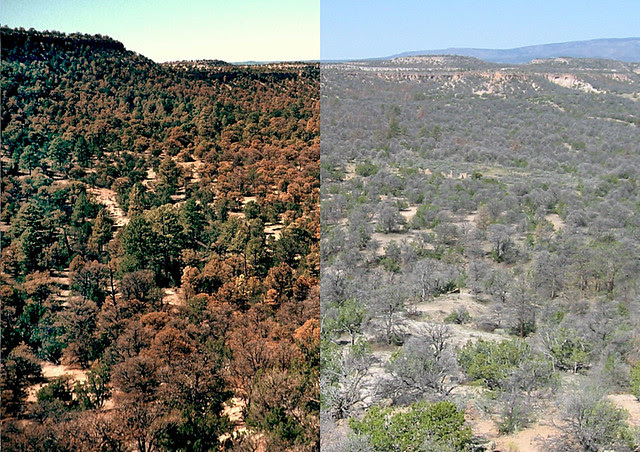 Climate models and precipitation projections indicate this period will actually be closer to the "wet end" of a drier hydroclimate during the last half of the 21st century, scientists said.

Aside from its impact on forests, crops, rivers and water tables, the drought also cut carbon sequestration by an average of 51 percent in a massive region of the western United States, Canada and Mexico, although some areas were hit much harder than others. As vegetation withered, this released more carbon dioxide into the atmosphere, with the effect of amplifying global warming.

"Climatic extremes such as this will cause more large-scale droughts and forest mortality, and the ability of vegetation to sequester carbon is going to decline," said Beverly Law, a co-author of the study, professor of global change biology and terrestrial systems science at Oregon State University, and former science director of AmeriFlux, an ecosystem observation network.

"During this drought, carbon sequestration from this region was reduced by half," Law said. "That's a huge drop. And if global carbon emissions don't come down, the future will be even worse."

It's not clear whether or not the current drought in the Midwest, now being called one of the worst since the Dust Bowl, is related to these same forces, Law said. This study did not address that, and there are some climate mechanisms in western North America that affect that region more than other parts of the country.

But in the West, this multi-year drought was unlike anything seen in many centuries, based on tree ring data. The last two periods with drought events of similar severity were in the Middle Ages, from 977-981 and 1146-1151. The 2000-04 drought affected precipitation, soil moisture, river levels, crops, forests and grasslands.

Ordinarily, Law said, the land sink in North America is able to sequester the equivalent of about 30 percent of the carbon emitted into the atmosphere by the use of fossil fuels in the same region. However, based on projected changes in precipitation and drought severity, scientists said that this carbon sink, at least in western North America, could disappear by the end of the century.

"Areas that are already dry in the West are expected to get drier," Law said. "We expect more extremes. And it's these extreme periods that can really cause ecosystem damage, lead to climate-induced mortality of forests, and may cause some areas to convert from forest into shrublands or grassland."

During the 2000-04 drought, runoff in the upper Colorado River basin was cut in half. Crop productivity in much of the West fell 5 percent. The productivity of forests and grasslands declined, along with snowpacks. Evapotranspiration decreased the most in evergreen needleleaf forests, about 33 percent.

The effects are driven by human-caused increases in temperature, with associated lower soil moisture and decreased runoff in all major water basins of the western U.S., researchers said in the study.

Although regional precipitations patterns are difficult to forecast, researchers in this report said that climate models are underestimating the extent and severity of drought, compared to actual observations. They say the situation will continue to worsen, and that 80 of the 95 years from 2006 to 2100 will have precipitation levels as low as, or lower than, this "turn of the century" drought from 2000-04.

"Towards the latter half of the 21st century the precipitation regime associated with the turn of the century drought will represent an outlier of extreme wetness," the scientists wrote in this study.

These long-term trends are consistent with a 21st century "megadrought," they said.