Tiny 'bone-devouring worms', known to both eat and inhabit dead whale skeletons and other bones on the sea floor, have a unique ability to release bone-melting acid, scientists at Scripps Institution of Oceanography, University of California, San Diego have recently discovered. The work is being presented at the Society for Experimental Biology's 2012 meeting in Salzburg, Austria.

These "bone-devouring worms," known to both eat and inhabit dead whale skeletons and other bones on the sea floor, have a unique ability to release bone-melting acid. 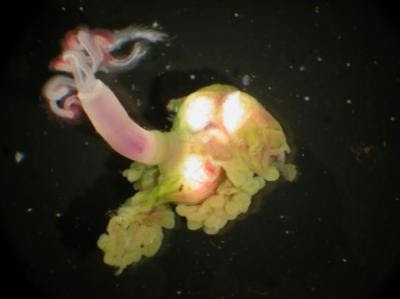 Dr Sigrid Katz, a postdoctoral researcher working with Greg Rouse and Martin Tresguerres, said: "These worms are unique in using bone as a habitat and nutrient source. We have learned a lot about these worms in the past 10 years, but one of the most intriguing questions has been how they penetrate bone and take up nutrients."

The worms, whose official genus name is Osedax, are up to 3-4 cm long and were discovered on a whale carcass in 2002. They come from a family of worms living in unexpected locations, with their relatives inhabiting the extremely hot and acidic hydrothermal vents in the sea.

The pinkish "bone-devouring worms" shown here on a piece of whale bone, eat and inhabit dead whale skeletons and other bones on the sea floor. A recent study has shown they have a unique ability to release bone-melting acid. 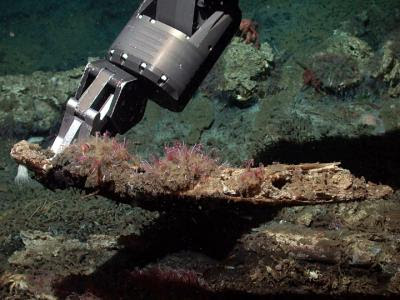 Like all worms in their family, Osedax have no mouth, anus, or gut. Their digestion of the nutritious bone is made possible by their partnership with bacteria.

While it had been clear that the worms and their bacteria rely on nutrients such as collagen or fat from the bones they inhabit, until now it was a mystery how the worms penetrated the bones and access their nutrients. Their bodies consist of a worm-like portion and 'roots' that house the bacteria and penetrate the bones, but they have no body parts mechanically able to drill through bone.

The researchers looked instead for signs of a chemical drilling strategy, testing for the presence of acid-secreting enzymes in different tissues of the worm. One of the enzymes, a proton pump, was abundant in the roots, the part of the worm that penetrates the bone. The results indicate that the worm secretes acid to demineralize the bones.

As Katz explained, "The discovery of Osedax shows that nutrition is even more diverse than we imagined, and our results are a step further in understanding the special relationship between the worm and its bacteria."

The findings of this study pertain to the females only. The males never grow beyond their larval size (about 1 mm) and they live inside the gelatinous tube that surrounds each female. Each female will have hundreds of males living in her tube. Contacts and sources:
Catie Lichten
Society for Experimental Biology
on July 02, 2012