A Giant Step In A Miniature World: UZH Researcher Measures The Electrical Charge Of Nano Particles

In order to observe the individual particles in a solution, Prof. Madhavi Krishnan and her co-workers «entice» each particle into an «electrostatic trap». It works like this: between two glass plates the size of a chip, the researchers create thousands of round energy holes. The trick is that these holes have just a weak electrostatic charge. The scientists than add a drop of the solution to the plates, whereupon each particle falls into an energy hole and remains trapped there. But the particles do not remain motionless in their trap. Instead, molecules in the solution collide with them continuously, causing the particles to move in a circular motion.

This is a cross-section through two chip-sized glass plates in which a nano particle is trapped in an energy hole (or “potential well” to use the scientific term). The colored fields show the different charges in the electrostatic field. The red zone signifies a very low charge, while the blue edges have a strong charge. 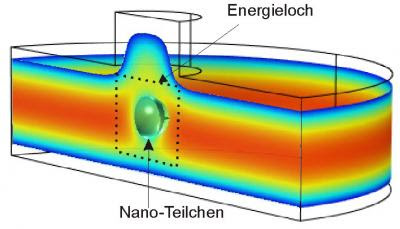 "We measure these movements, and are then able to determine the charge of each individual particle", explains Prof. Madhavi Krishnan.

Put simply, particles with just a small charge make large circular movements in their traps, while those with a high charge move in small circles. This phenomenon can be compared to that of a light-weight ball which, when thrown, travels further than a heavy one. The US physicist Robert A. Millikan used a similar method 100 years ago in his oil drop experiment to determine the velocity of electrically charged oil drops. In 1923, he received the Nobel Prize in physics in recognition of his achievements. «But he examined the drops in a vacuum», Prof. Krishnan explains. «We on the other hand are examining nano particles in a solution which itself influences the properties of the particles».

'With our new method, we get a picture of the entire suspension along with all of the particles contained in it", emphasizes Prof. Madhavi Krishnan. A suspension is a fluid in which miniscule particles or drops are finely distributed, for example in milk, blood, various paints, cosmetics, vaccines and numerous pharmaceuticals. "The charge of the particles plays a major role in this", the Zurich-based scientist tells us.

One example is the manufacture of medicines that have to be administered in precise doses over a longer period using drug-delivery systems. In this context, nano particles act as «packages» that transport the drugs to where they need to take effect. Very often, it is their electrical charge that allows them to pass through tissue and cell membranes in the body unobstructed and so to take effect. «That's why it is so important to be able to measure their charge. So far most of the results obtained have been imprecise», the researcher tells us.

"The new method allows us to even measure in real-time a change in the charge of a single entity", adds Prof. Madhavi Krishnan. «This is particularly exciting for basic research and has never before been possible». This is because changes in charge play a role in all bodily reactions, whether in proteins, large molecules such as the DNA double helix, where genetic make-up is encoded, or cell organelles."We're examining how material works in the field of millionths of a millimeter".