Replacing The Typical Lawn With A Diverse Garden

A University of Delaware research project is examining whether replacing the typical suburban yard of mostly grass with one containing diverse vegetation can help protect the environment.

At first glance, Tim Schofield’s internship duties don’t appear much different from what any landscape worker does. Every week, June through August, this rising junior at the University of Delaware will weed landscape beds, cut back straggly branches and rake up plant debris on a one-acre yard in Applecross, a neighborhood off Route 100 in Greenville.

But Schofield also will catalog the diversity of beneficial insects, birds and other wildlife on the property, document evidence of soil erosion, and keep precise records of the time it takes to complete his tasks. It’s all part of a UD research project to see if replacing the typical suburban yard of mostly grass with one containing diverse vegetation can help protect the environment and make landscapes more sustainable. 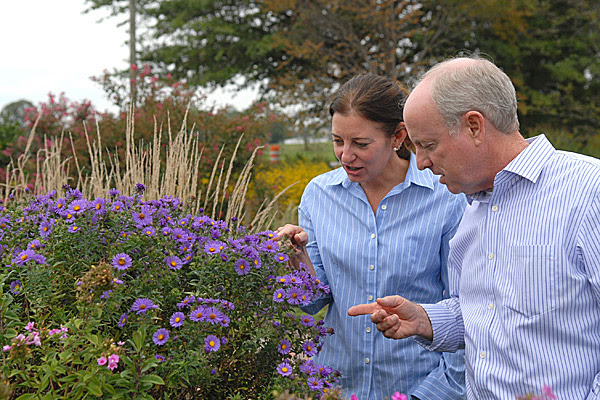 One of the primary goals of the project is to curb water pollution at its source -- preventing pollution in the first place rather than waiting to treat contaminated water after it enters waterways.

“I think people understand that water quality in urban watersheds is degraded when you increase impervious surfaces, such as roads and parking lots,” says Doug Tallamy, chair of UD’s Department of Entomology and Wildlife Ecology and a co-investigator of the research project. “But they don’t always realize that increasing the amount of grass in an urban watershed also degrades water quality.”

A landscaping philosophy that views plants as mere ornaments has prevailed for more than a century, resulting in the replacement of native plant communities with expansive lawns. Today, a whopping 92 percent of all suburban yards consist of turf grass. Because plants are the mechanism in which water is cleaned and stored, carbon is sequestered and complex food webs are maintained, any reduction in native plant communities can only mean bad things for water quality.

“People care about clean water,” says Tallamy. “If homeowners realize that they can use their properties to clean water, sequester carbon and help pollinators, it could help change the mind set of those who demand huge lawns.”

The Applecross property is just one aspect of the UD multidisciplinary project involving five faculty members and dozens of undergraduate and graduate students. Another research site is located at Winterthur, where the team will compare the quality of a stream impacted by traditional mowed landscapes versus another stream that only receives runoff from meadows, forests and landscape beds.

Co-researchers Sue Barton, Cooperative Extension ornamental horticulture specialist and Jules Bruck, associate professor of landscape horticulture and design, worked together to create a landscape plan for the Applecross property to replace the existing turf grass monoculture. The homeowners received the landscape installation at no cost and have agreed to allow researchers onto the site every week for the next three years.

“We were starting with the typical suburban landscape with lots of grass, some foundation plantings and one or two trees in the yard,” says Barton.

Last month, Schofield and other students and volunteers set to work on the new landscape, planting 200 woody plants and 1,200 plant plugs in a matter of days. They created a 6,000 square-foot meadow of native grasses and reforested an area of lawn that adjoins a wooded tract. Invasive plants were removed and replaced by white oaks, blueberry bushes, ornamental grasses and other native species.

“There is still turf on the property but it’s being used purposefully, for recreation areas, circulation, or as the green carpet that sets off other plantings,” notes Barton.

Although the new landscape will need a year or so to fully fill in, it’s already attractive and a vast improvement over the previous vast expanse of grass. The UD researchers recognize that homeowners aren’t going to change their ways to improve the environment unless the results look good.

“Some people have the misconception that native plants are sloppy or somehow less appealing than non-natives,” says Barton. “I think the landscape we have created in Applecross is dense, rich and beautiful and should put such misconceptions to rest.”

UD will host several public tours of the Applecross property beginning in 2013.

Schofield, who is double majoring in landscape design and agribusiness, is excited to be a part of the research project. He says he wants to learn as much as he can about sustainable landscaping so he can incorporate into his own practices. He has operated a small landscape company in Malvern, Pa., since high school and hopes to expand the business after college.


Contacts and sources:
Article by Margo McDonough
University of Delaware