Potential For Tsunamis In Northwestern California

Using studies that span the last three decades, scientists at UC Santa Barbara have compiled the first evidence-based comprehensive study of the potential for tsunamis in Northwestern California. The paper, "Paleoseismicity of the Southern End of the Cascadia Subduction Zone, Northwestern California," was co-written by professors Edward Keller and Alexander Simms from UCSB's Department of Earth Science, and published in a recent issue of the Bulletin of the Seismological Society of America.

The paper is based on the Ph.D. dissertation of David Valentine, a research programmer at the Spatial Information Systems Laboratory at UC San Diego. Valentine, Keller's former student, completed his doctorate at UCSB in 2002 and is first author of the paper.

The region has long been known to experience large earthquakes, and scientific studies of seismic activity in the southern end of the Cascadia Subduction Zone (CSZ) –– which stretches northward from the area of Mendocino, Calif. –– have previously appeared in grey literature and in guidebooks. However, comprehensive, reviewed evidence-based work has been lacking, according to Keller. 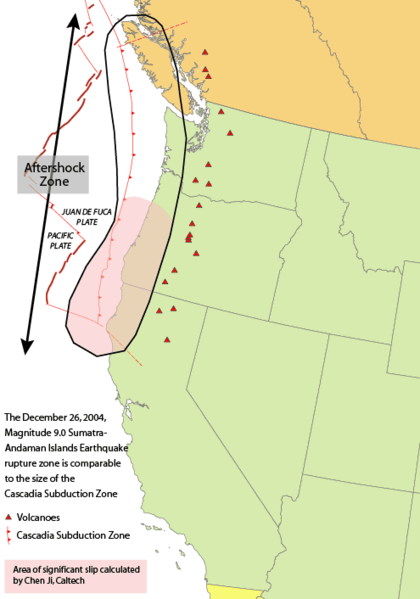 "Science goes on evidence," he said, adding that in light of the recent earthquakes in Japan and Chile, the study of the same potential closer to home is "timely." The authors studied sedimentation patterns in salt marshes, floodplains, and estuaries in the northwestern corner of California for signs of seismic events that could lead to tsunami activity. They combined this with information gathered from numerous studies conducted over nearly 30 years by researchers at Humboldt State University

During an earthquake, the researchers say, there is a tendency for the coastal wetlands to become submerged, with coastal sediments depositing over plants and animals that live there. These become a fossilized record of sea-level change in the area.

The process has preserved a sequence of marsh surfaces and forest soils. Analysis of structure, texture, and organic content, as well as the use of radiocarbon dating to identify the age of the materials, revealed evidence of smaller strong-to-major earthquakes in the area (magnitude 6.5 to 7.2). Larger quakes (greater than magnitude 8.2) that involved the regional subduction zone, were also in evidence.

According to the study, the local California section has experienced three major earthquakes over the last 2000 years, and accompanying local sea-level changes at roughly 300- to 400-year intervals, with the last one occurring 500 to 600 years ago. The researchers also found that the entire CSZ erupted, causing local submergence at least three times in roughly 500- to 600- year intervals, the last activity taking place in 1700 AD.

"It's not a matter of if, but when," said Keller, of the potential for the next major earthquake/tsunami event in the region –– a great earthquake that would impact not only the Northwest, but also send waves to Japan and Hawaii. The evidence, he said, is leading to far more foresight and planning along the impact areas in the region to avoid catastrophes on a level with the Japan earthquake of 2011 or the Indian Ocean quake of 2004.

Other researchers contributing to the study include Gary Carver, a professor emeritus at Humboldt State University; Wen Hao Li from Northrup Grummond Co. in Redondo Beach; and Christine Manhart from Environmental Services and Consulting in Blacksburg, Va. Contacts and sources:
Sonia Fernandez
University of California - Santa Barbara
on June 27, 2012