Researchers at Rice University have developed a lithium-ion battery that can be painted on virtually any surface.

The rechargeable battery created in the lab of Rice materials scientist Pulickel Ajayan consists of spray-painted layers, each representing the components in a traditional battery. The research appears today in Nature's online, open-access journal Scientific Reports. 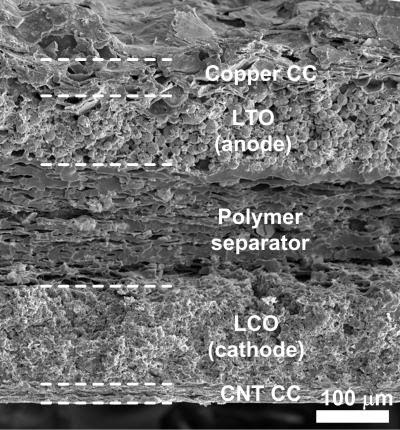 "This means traditional packaging for batteries has given way to a much more flexible approach that allows all kinds of new design and integration possibilities for storage devices," said Ajayan, Rice's Benjamin M. and Mary Greenwood Anderson Professor in Mechanical Engineering and Materials Science and of chemistry. "There has been a lot of interest in recent times in creating power sources with an improved form factor, and this is a big step forward in that direction."

Lead author Neelam Singh, a Rice graduate student, and her team spent painstaking hours formulating, mixing and testing paints for each of the five layered components – two current collectors, a cathode, an anode and a polymer separator in the middle.

The materials were airbrushed onto ceramic bathroom tiles, flexible polymers, glass, stainless steel and even a beer stein to see how well they would bond with each substrate.

Conventional lithium-ion batteries wrap active layers into a canister or other portable container. But Rice University researchers have found a way to paint those layers onto any surface, which opens up the possibility of turning those surfaces into storage devices.

In the first experiment, nine bathroom tile-based batteries were connected in parallel. One was topped with a solar cell that converted power from a white laboratory light. When fully charged by both the solar panel and house current, the batteries alone powered a set of light-emitting diodes that spelled out "RICE" for six hours; the batteries provided a steady 2.4 volts.

The researchers reported that the hand-painted batteries were remarkably consistent in their capacities, within plus or minus 10 percent of the target. They were also put through 60 charge-discharge cycles with only a very small drop in capacity, Singh said.

Each layer is an optimized stew. The first, the positive current collector, is a mixture of purified single-wall carbon nanotubes with carbon black particles dispersed in N-methylpyrrolidone. The second is the cathode, which contains lithium cobalt oxide, carbon and ultrafine graphite (UFG) powder in a binder solution. The third is the polymer separator paint of Kynar Flex resin, PMMA and silicon dioxide dispersed in a solvent mixture. The fourth, the anode, is a mixture of lithium titanium oxide and UFG in a binder, and the final layer is the negative current collector, a commercially available conductive copper paint, diluted with ethanol.

"The hardest part was achieving mechanical stability, and the separator played a critical role," Singh said. "We found that the nanotube and the cathode layers were sticking very well, but if the separator was not mechanically stable, they would peel off the substrate. Adding PMMA gave the right adhesion to the separator." Once painted, the tiles and other items were infused with the electrolyte and then heat-sealed and charged.

Singh said the batteries were easily charged with a small solar cell. She foresees the possibility of integrating paintable batteries with recently reported paintable solar cells to create an energy-harvesting combination that would be hard to beat. As good as the hand-painted batteries are, she said, scaling up with modern methods will improve them by leaps and bounds. "Spray painting is already an industrial process, so it would be very easy to incorporate this into industry," Singh said.

The Rice researchers have filed for a patent on the technique, which they will continue to refine. Singh said they are actively looking for electrolytes that would make it easier to create painted batteries in the open air, and they also envision their batteries as snap-together tiles that can be configured in any number of ways.

"We really do consider this a paradigm changer," she said.