Genomic analysis of two individuals hunter-gatherers who lived 7,000 years ago reveals that the inhabitants of the Iberian Peninsula are not genetically different from these groups. The work, coordinated by the Spanish Carlos Lalueza-Fox, obtained the first genomic data of people who lived in the European Mesolithic.

The remains of two were found in the Mesolithic site of La Brana-Leon Arintero. 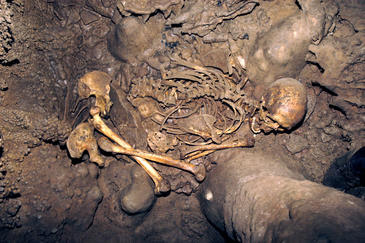 Researchers have analyzed the 1.34% and 0.5% of the total genome of the two individuals

"This is the first genomic data obtained from individuals of European Mesolithic," says Carles Lalueza SINC-Fox. The researcher of the Institute of Evolutionary Biology (UPF-CSIC) has coordinated international work that recovers part of the genome of two individuals hunter-gatherers 7,000 years ago.According to the article, published in Current Biology , the current Iberian populations not genetically descended from these groups.

The remains are from the site of the brane-Leon Arintero in Valdelugueros. The Mesolithic lived in a frame period between Paleolithic and Neolithic, characterized by the arrival of agriculture in the Near East. These are the oldest prehistoric fossils of our species has been done and exceed paleogenético analysis on 1,700 years of Ötzi , the popular 'Iceman', whose genome was also recovered.

Researchers have analyzed the 1.34% and 0.5% of the total genome of the two individuals. "It may seem small, but it is proof that it is feasible to get the project complete sequencing," says Lalueza-Fox.

Moreover, they have succeeded in recovering the complete mitochondrial genome of one of the individuals. These genes are found in mitochondria, outside the cell nucleus, and are transmitted only through the mother. The data shows that hunter-gatherers shared the same mitochondrial lineage, but their nomadic habits distributed them throughout Europe, in regions which are currently in England, Germany, Lithuania, Poland and Spain.

Where do we come?

"There are many hypotheses about the affinities and population migration in the prehistory of Europe. From now on we can test using genomic data framed in time and space, "says Lalueza-Fox.

One such hypothesis is that the current Iberian could descend from the following players in history, the Neolithic farmers. It is believed that during this period there were great changes in European populations.

"We can not say scientifically that descend from those farmers, but the most plausible hypothesis is that the Neolithic population replacement had a great southern Europe," says Lalueza-Fox. Scientists believe that farmers north came later and in smaller numbers, so assimilated with the Mesolithic populations. "It could be why the two individuals that we analyzed are closest to the current populations of the continent north of the south", continues the biologist.

However, Lalueza-Fox points out that the sequencing of these genomes will provide an overview of the changes experienced by the current European populations with the advent of agriculture and livestock. In the end, he concludes: "We all come from the Neolithic, we Neolithic diets, diseases and social organizations Neolithic Neolithic."