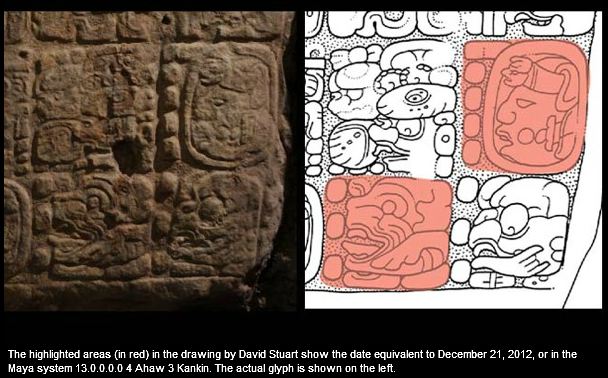 A publishing and entertainment empire has arisen around the supposed Mayan “end date” of December 21, 2012. But a second reference to the date, discovered only recently in Guatemala by a team including UT’s David Stuart, further debunks the theory that the Maya expected the world to end. In this slideshow, including images from National Geographic, see the discovery at La Corona and read how the Maya used the date simply as “a literary device.” 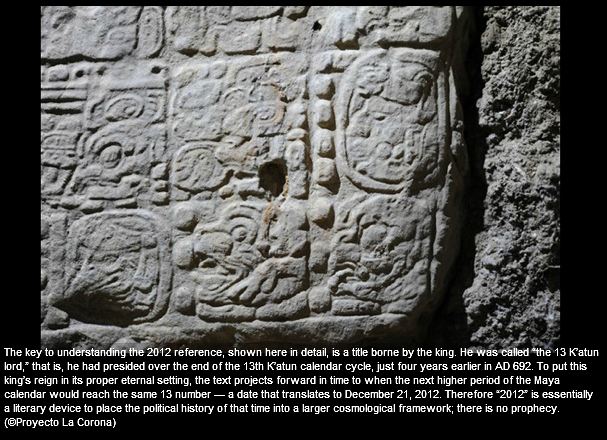 Archaeologists working in the jungles of Guatemala have discovered an ancient Maya text that refers to the so-called end date of the Maya calendar, Dec. 21, 2012. The hieroglyphic inscription was unearthed in April at the ruins of La Corona, located in the dense rainforest of northwestern Guatemala, and deciphered by David Stuart of The University of Texas at Austin during his research at the site in May. 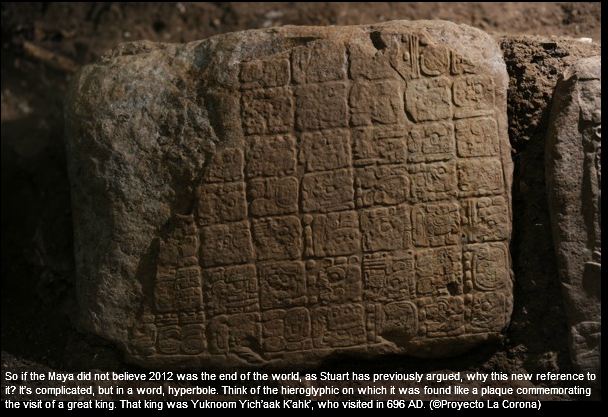 The text is one of many found this year by an international team led by archaeologists from Tulane University and the Universidad del Valle de Guatemala. Among their discoveries are portions of the longest text ever discovered in Guatemala, carved on multiple staircase steps and recording 200 years of La Corona’s history, now being closely studied by Stuart and his colleagues. The discovery, perhaps the most significant hieroglyphic find in decades, was announced at a news conference held this morning at the National Palace in Guatemala City. 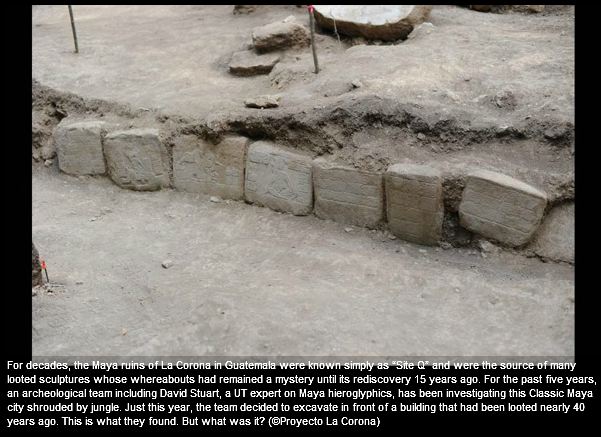 The stone referring to the year 2012 was carved to commemorate a royal visit to La Corona (which the ancient Maya called Saknikte’) by the ruler Yuknoom Yich’aak K’ahk’ from the great Maya capital of Calakmul on Jan. 29, 696 A.D. Before the discovery, this ruler was thought by scholars to have been killed in battle, when Calakmul was defeated by its great rival, Tikal. But the new find makes it clear that Yuknoom Yich’aak K’ahk’ was visiting allies — such as La Corona — in the wake of this defeat, possibly soothing their fears after such a significant military loss. 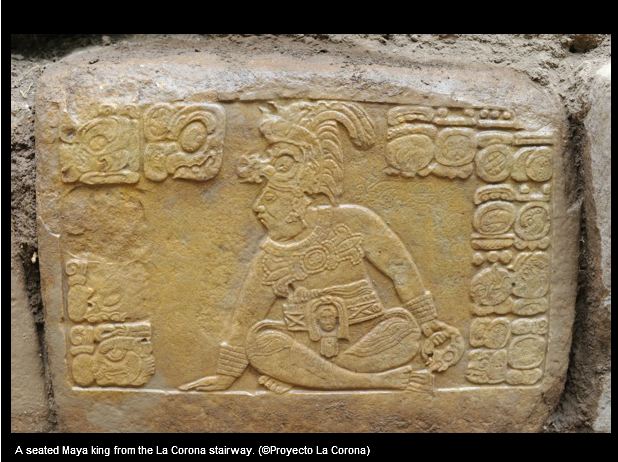 Why the reference to the year 2012? “The reason mostly has to do with the cosmological dimensions of ancient Maya politics and kingship,” says Stuart. “Calakmul’s king had only recently celebrated an important ending of 13 K’atun calendar cycle, in the year 692 (9.13.0.0.0), and in this text he is called a “13 K’atun lord.” The scribe has used this important ritual fact to project forward to when the next higher period of the Maya calendar will also reach 13 — a sacred Maya number — which will come on Dec. 21, 2012 (13.0.0.0.0).”

It is in this context that we have only the second reference to the “end date” in the entire corpus of ancient Maya writing, according to Stuart. This text uses the 2012 date to put this king’s troubled reign and accomplishments into a larger cosmological framework

“This new evidence suggests that the 2012 date was an important calendrical event that would have been celebrated by the ancient Maya; however, they make no apocalyptic prophecies about it whatsoever,” says Marcello Canuto, director of Tulane’s Middle American Research Institute and co-director of the excavations at La Corona. Since 2008, Canuto and Tomás Barrientos of the Universidad del Valle de Guatemala, have directed excavations at La Corona. Stuart was part of a 1997 expedition that first explored and documented the ruins, when he named it La Corona (“The Crown”) after a distinctive building seen in the forest there — a line of five closely spaced small pyramids. 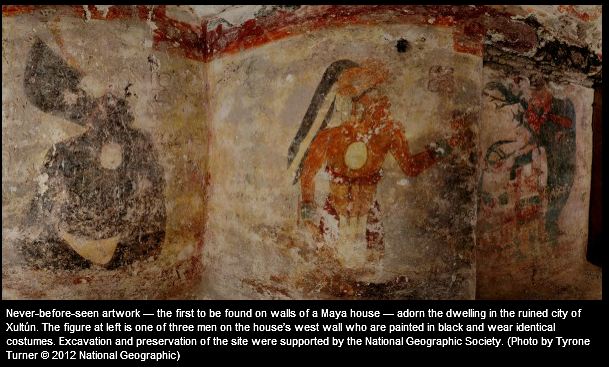 Stuart’s decipherments at La Corona come shortly after another significant find announced earlier this year — the discovery of a painted structure at the ruins of Xultun, Guatemala, containing what is thought to be the work space of a scribe or calendar priest. Stuart collaborated with William Saturno of Boston University, who directs the Xultun excavations, to decipher the unique paintings found on the walls of the small structure. 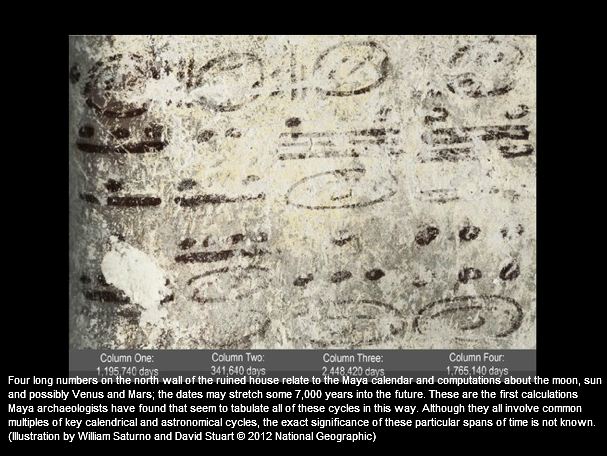 The structure is covered with tiny red and black numbers and hieroglyphs, unlike any seen before at other Maya sites. These appear to be notations, written by the scribes as they were working and carrying out calendrical calculations, similar to a modern mathematician’s office whiteboard. Some numbers appear to represent the various calendrical cycles charted by the Maya — the 260-day ceremonial calendar, the 365-day solar calendar, the 584-day cycle of the planet Venus and the 780-day cycle of Mars, reports lead excavator Saturno. Saturno and Stuart reported their findings in a paper they co-authored for the journal Science titled, ”Ancient Maya Astronomical Tables from Xultun, Guatemala.” 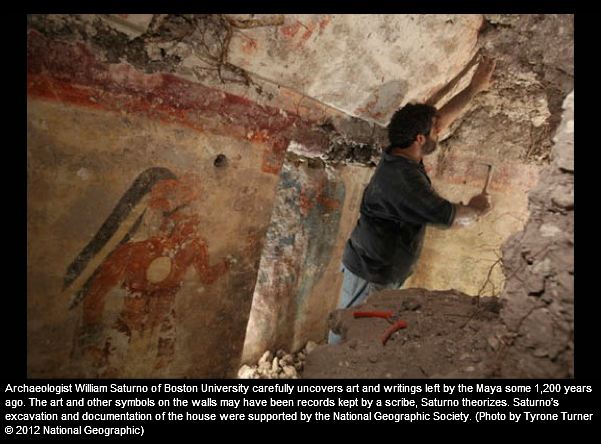 Stuart’s main contribution was to read and reconstruct the numbers, many of which were poorly preserved. He also identified the nature of the tables as ancient tools for calendrical calculations, including lunar cycles. Finally, he carefully copied the texts so colleagues and future scholars can also study them. His field time in March involved working directly with the paintings and texts before they were closed and eventually reburied — the best means of ensuring their preservation in the remote jungle.

“It was incredible being in an ancient room where scribes and calendar priests were once working on their calculations, perhaps even discussing them,” says Stuart. “The day after I reconstructed the very damaged lunar table from Xultun, I shared the exciting news with undergrads who were in the UT study abroad program in Antigua, Guatemala.

“As a fun exercise, I had the students figure out the how the ancient Maya would have written each column in the table, using bars and dots. On the whiteboard in our classroom we wrote the table as it would have originally looked — 27 columns of Maya numbers. It was the first time it had ever been reconstructed visually, and it was a really special moment.” 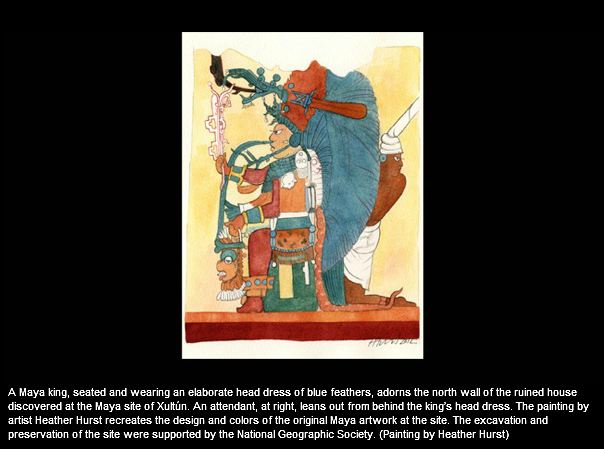 Stuart is the David and Linda Schele Professor of Mesoamerican Art and Writing at The University of Texas at Austin. He is the author of the popular book on the Maya calendar, “The Order of Days: The Maya World and the Truth about 2012.” Stuart’s research is supported by the Schele research fund from the College of Fine Arts at The University of Texas at Austin and through the Casa Herrera research facility in Guatemala, where he does much of his work throughout the year. 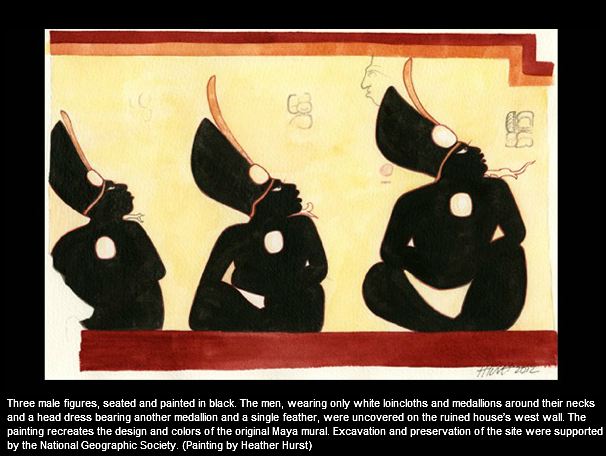