Archaeological research carried out at the Neolithic site of La Draga, near the lake of Banyoles, has yielded the discovery of an item which is unique in the western Mediterranean and Europe. The item is a bow which appeared in a context dating from the period between 5400-5200 BCE, corresponding to the earliest period of settlement. It is a unique item given that it is the first bow to be found in tact at the site. According to its date, it can be considered chronologically the most ancient bow of the Neolithic period found in Europe.

The complete bow discovered during this year's campaign. 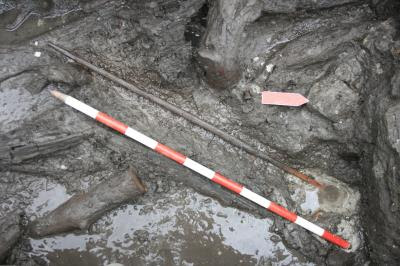 The study will permit the analysis of aspects of the technology, survival strategies and social organisation of the first farming communities which settled in the Iberian Peninsula. The bow is 108 cm long and presents a plano-convex section. Worth mentioning is the fact that it is made out of yew wood (Taxus baccata) as were the majority of Neolithic bows in Europe.

In previous archaeological campaigns, fragments of two bows were found (in 2002 and 2005) also from the same time period, but since they are fragmented it is impossible to analyse the characteristics of these tools. The current discovery opens new perspectives in understanding how these farming communities lived and organised themselves. These bows could have served different purposes, such as hunting, although if one takes into account that this activity was not all that common in the La Draga area, it cannot be ruled out that the bows may have represented elements of prestige or been related to defensive or confrontational activities.

Remains have been found of bows in Northern Europe (Denmark, Russia) dating from between the 8th and 9th centuries BCE among hunter-gatherer groups, although these groups were from the Paleolithic period, and not the Neolithic. The majority of bows from the Neolithic period in Europe can be found in central and northern Europe. Some fragments of these Neolithic bows from central Europe date from the end of the 6th millennium BCE, between 5200-5000 BCE, although generally they are from later periods, often more than a thousand years younger than La Draga. For this reason archaeologists can affirm that the three bows found at La Draga are the most ancient bows in Europe from the Neolithic period.

The process of the work was carried out at the La Draga site in Griona, Spain. 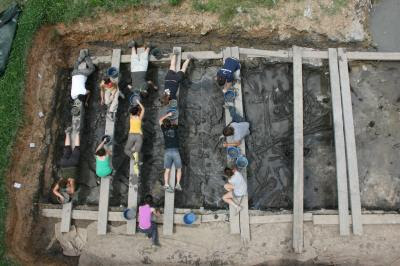 The research carried out at the La Draga site is financed by the Department of Culture of the Government of Catalonia and the Spanish Ministry for Economy and Competitiveness. This project is being conducted under the coordination of the County Archaeological Museum of Banyoles, with the participation of the UAB Department of Prehistory, the Department of Archaeology and Anthropology of the CSIC Institute Milà i Fontanals, the National Museum of Archaeology of Catalonia and the Centre for Underwater Archaeology of Catalonia. The excavation includes the participation of archaeology students from UAB and other universities in Spain and Europe.

La Draga is located in the town of Banyoles, belonging to the county of Pla de l'Estany, and is an archaeological site corresponding to the location in which one of the first farming communities settled in the north-east of the Iberian Peninsula. The site is located on the eastern part of the Banyoles Lake and dates back to 5400 and 5000 BCE. The site occupies 8000 sq m and stretches out 100 m along the lake's shore and 80 m towards the east. Part of the site is totally submerged in the lake, while other parts are located on solid ground. The first digs were conducted between the years 1990 and 2005, under the scientific leadership of the County Archaeological Museum of Banyoles. Since 1994, excavations were also carried out by the Centre for Underwater Research (Museum of Archaeology of Catalonia). The current project (2008-2013) includes participation by the Universitat Autònoma de Barcelona and the Spanish National Research Council.

The site at La Draga is exceptional for several reasons. Firstly, due to its antiquity, which is considered to be one of the oldest of the Neolithic period existing in the Iberian Peninsula. Secondly, because it is an open-air site with a fairly continuous occupation. Lastly, and surely most remarkably, because of its exceptional conditions in which it is conserved. The archaeological levels are located in the phreatic layer surrounding Lake Banyoles, giving way to anaerobic conditions which favour the conservation of organic material. These circumstances make La Draga a unique site in all of the Iberian Peninsula, since it is the only one known to have these characteristics. In Europe, together with Dispilo in Greece and La Marmota in Italy, it is one of the few lake settlements from the 6th millennium BCE.

The phenomenon of Neolithic lake settlements is well known in the more modern chronologies of central Europe, where there is an abundance of lakes and humid environments, but extremely rare outside this geographic area. For this reason, the La Draga site is well-known amongst specialised scientific sectors and attracts researchers from around the world because of the quality of the data which can be obtained from this archaeological context. La Draga is a palaeodiverse island offering a set of extraordinary bioarchaeological elements, key for the analysis of how farming and livestock rearing communities came into existence in Europe.