An international team of astronomers using data from NASA's Hubble Space Telescope has made an unparalleled observation, detecting significant changes in the atmosphere of a planet located beyond our solar system

The exoplanet HD 189733b lies so near its star that it completes an orbit every 2.2 days. In late 2011, NASA's Hubble Space Telescope found that the planet's upper atmosphere was streaming away at speeds exceeding 300,000 mph. Just before the Hubble observation, NASA's Swift detected the star blasting out a strong X-ray flare, one powerful enough to blow away part of the planet's atmosphere.

The scientists conclude the atmospheric variations occurred in response to a powerful eruption on the planet's host star, an event observed by NASA's Swift satellite.

"The multiwavelength coverage by Hubble and Swift has given us an unprecedented view of the interaction between a flare on an active star and the atmosphere of a giant planet," said lead researcher Alain Lecavelier des Etangs at the Paris Institute of Astrophysics (IAP), part of the French National Scientific Research Center located at Pierre and Marie Curie University in Paris.

The exoplanet is HD 189733b, a gas giant similar to Jupiter, but about 14 percent larger and more massive. The planet circles its star at a distance of only 3 million miles, or about 30 times closer than Earth's distance from the sun, and completes an orbit every 2.2 days. Its star, named HD 189733A, is about 80 percent the size and mass of our sun.

This artist's rendering illustrates the evaporation of HD 189733b's atmosphere in response to a powerful eruption from its host star. NASA's Hubble Space Telescope detected the escaping gases and NASA's Swift satellite caught the stellar flare. 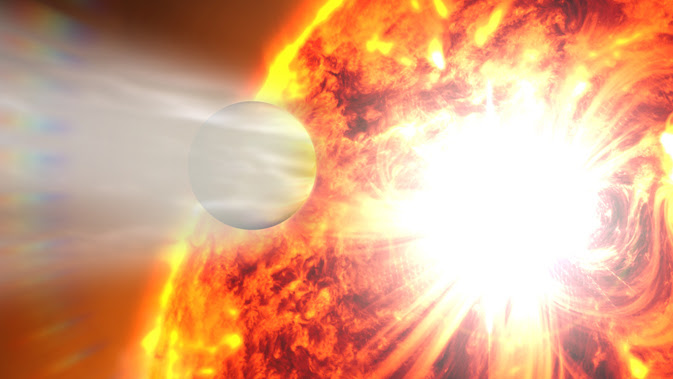 Astronomers classify the planet as a "hot Jupiter." Previous Hubble observations show that the planet's deep atmosphere reaches a temperature of about 1,900 degrees Fahrenheit (1,030 C).

HD 189733b periodically passes across, or transits, its parent star, and these events give astronomers an opportunity to probe its atmosphere and environment. In a previous study, a group led by Lecavelier des Etangs used Hubble to show that hydrogen gas was escaping from the planet's upper atmosphere. The finding made HD 189733b only the second-known "evaporating" exoplanet at the time.

The system is just 63 light-years away, so close that its star can be seen with binoculars near the famous Dumbbell Nebula. This makes HD 189733b an ideal target for studying the processes that drive atmospheric escape.

"Astronomers have been debating the details of atmospheric evaporation for years, and studying HD 189733b is our best opportunity for understanding the process," said Vincent Bourrier, a doctoral student at IAP and a team member on the new study.

Swift's Ultraviolet/Optical Telescope captured this view of HD 189733b's star on Sept. 14, 2011. The image is 6 arcminutes across 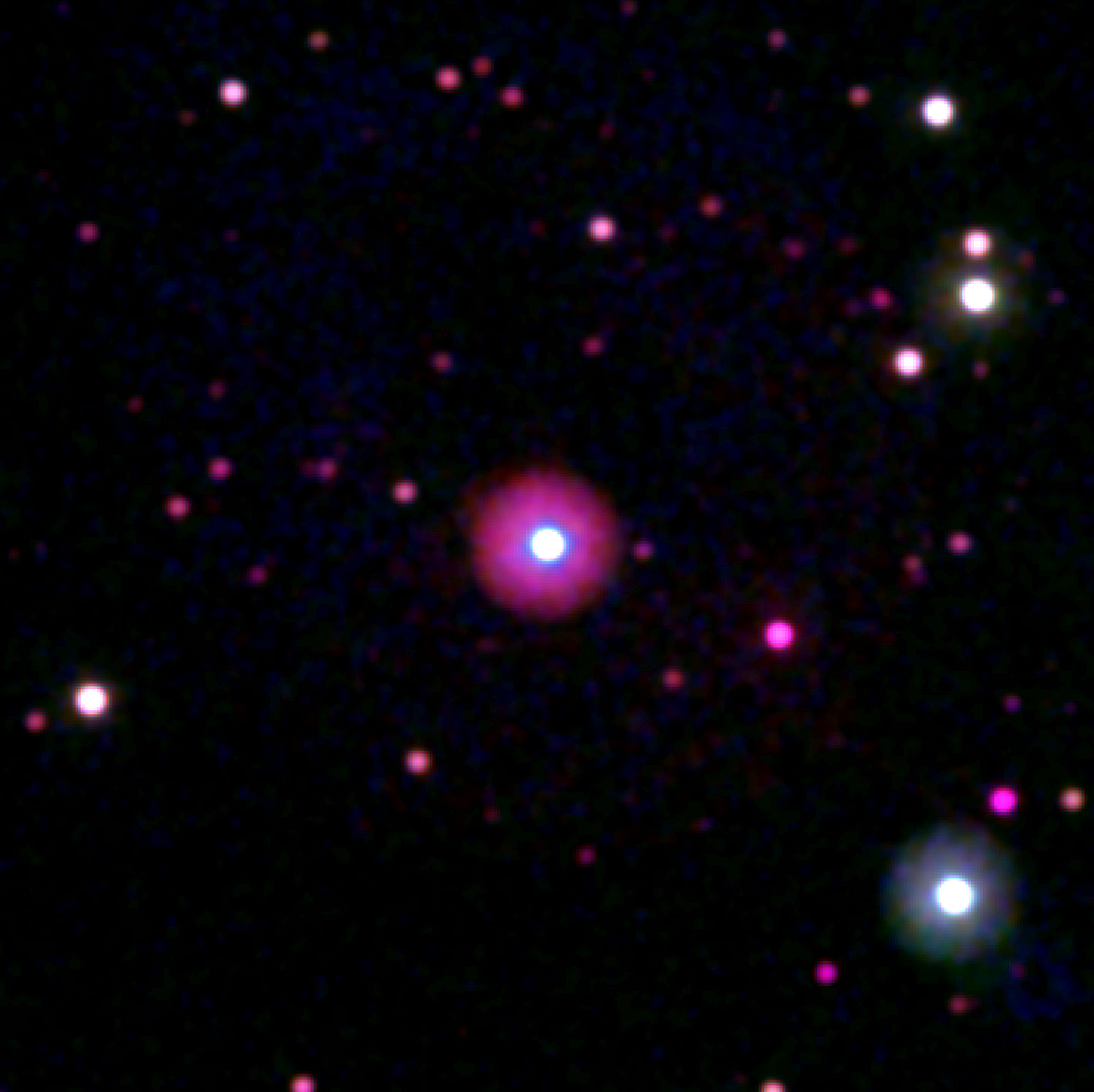 Strong X-ray emission makes the host star of HD 189733b stand out in this view from Swift's X-Ray Telescope. The image combines data from Sept. 13 and 14, 2011, and is 6 arcminutes across. 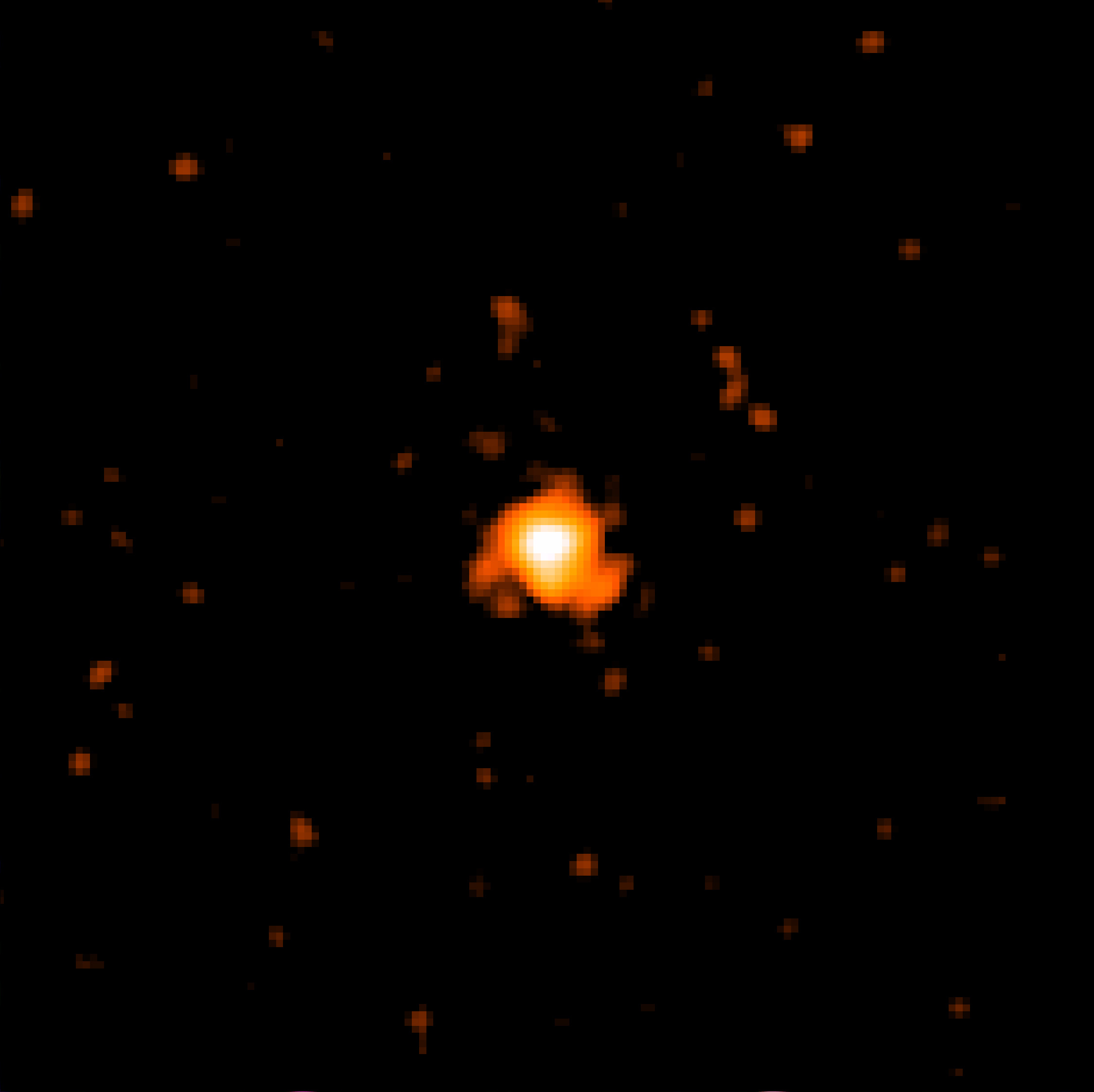 In April 2010, the researchers observed a single transit using Hubble's Space Telescope Imaging Spectrograph (STIS), but they detected no trace of the planet's atmosphere. Follow-up STIS observations in September 2011 showed a surprising reversal, with striking evidence that a plume of gas was streaming away from the exoplanet.

The researchers determined that at least 1,000 tons of gas was leaving the planet's atmosphere every second. The hydrogen atoms were racing away at speeds greater than 300,000 mph. The findings will appear in an upcoming issue of the journal Astronomy & Astrophysics.

Because X-rays and extreme ultraviolet starlight heat the planet's atmosphere and likely drive its escape, the team also monitored the star with Swift's X-ray Telescope (XRT). On Sept. 7, 2011, just eight hours before Hubble was scheduled to observe the transit, Swift was monitoring the star when it unleashed a powerful flare. It brightened by 3.6 times in X-rays, a spike occurring atop emission levels that already were greater than the sun's.

"The planet's close proximity to the star means it was struck by a blast of X-rays tens of thousands of times stronger than the Earth suffers even during an X-class solar flare, the strongest category," said co-author Peter Wheatley, a physicist at the University of Warwick in England.

After accounting for the planet's enormous size, the team notes that HD 189733b encountered about 3 million times as many X-rays as Earth receives from a solar flare at the threshold of the X class.

Hubble is a project of international cooperation between NASA and the European Space Agency. Swift is operated in collaboration with several U.S. institutions and partners in the United Kingdom, Italy, Germany and Japan. NASA's Goddard Space Flight Center in Greenbelt, Md., manages both missions.