Hottest Temperature Ever Made By Man, As Hot As The Second After The Big Bang, Melting Atoms

The positive and sometimes unexpected impact of particle physics is well documented, from physicists inventing the World Wide Web to engineering the technology underlying life-saving magnetic resonance imaging (MRI) devices. But sometimes the raw power of huge experiments and scientific ambition draw the recognition of those seeking only the most extreme achievements on Earth. 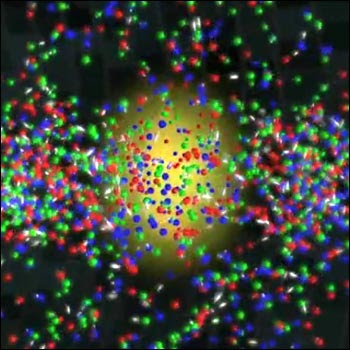 Brookhaven National Laboratory’s Relativistic Heavy Ion Collider (RHIC) smashes particles together to recreate the incredible conditions that only existed at the dawn of time (video). The 2.4-mile underground atomic “racetrack” at RHIC produces fundamental insights about the laws underlying all visible matter. But along the way, its particles also smashed a world record.

Guinness World Records, no longer encumbered by “book of,” recognized Brookhaven Lab for achieving the “Highest Man-Made Temperature.” When RHIC collides gold ions at nearly the speed of light, the impact energy becomes so intense that the neutrons and protons inside the gold nuclei “melt,” releasing fundamental quarks and gluons that then form a nearly friction-free primordial plasma that only existed in Nature about a millionth of one second after the Big Bang. RHIC discovered this primordial, liquid-like quark-gluon plasma and measured its temperature at around 4 trillion degrees Celsius – that’s 250,000 times hotter than the center of the sun.

“There are many cool things about this ultra-hot matter,” said physicist Steven Vigdor, who leads Brookhaven’s nuclear and particle physics program. “We expected to reach these temperatures – that is, after all, why RHIC was built – but we did not at all anticipate the nearly perfect liquid behavior.”

As it turns out, this surprising phenomenon occurs at both extremes of the temperature spectrum.

“Other physicists have now observed quite similar liquid behavior in trapped atom samples at temperatures near absolute zero, ten million trillion times colder than the quark-gluon plasma we create at RHIC,” Vigdor said. “This is just one among many unexpected connections we’ve found between RHIC physics and other scientific forefronts. The unity of physics is a beautiful thing!”

Speaking of unity in physics, a much larger collider is also probing quark-gluon plasma and generating sun-shaming temperatures. The 17-mile Large Hadron Collider (LHC) at Europe’s CERN laboratory smashes lead ions together in its own super-hot recreations of the Big Bang. And the LHC’s ALICE (A Large Ion Collider Experiment) may be positioned to trump RHIC’s record.

“The energy density at the LHC is a factor of three higher than at RHIC,” said CERN physicist Despina Hatzifotiadou. “This translates to a 30 percent increase in absolute temperature compared to the value achieved by RHIC. So I would say that ALICE has the record!”

But despite ALICE’s prowess, the collaboration has not published an official temperature measurement of its quark-gluon plasma, and the Guinness team is nothing if not official. For the time being, RHIC reigns, having driven physics forward by creating that revelatory multi-trillion degree matter many billions of times. But as with all records, RHIC’s Guinness is destined to be broken.