Henry Scharfe And His Robotic Clone

Humanoid robots can walk down the street in ten years and live with humans without them being aware they are electronic in nature, said a professor at the University of Aalborg (Denmark), Henrik Scharfe last Friday in Lima, who has created a robot with the same appearance.

ExpoTic During the inauguration of 2012, the first international exhibition and conference infrastructure and technological innovation that took place in Lima, Scharfe presented Geminoid-DK, a robot created in his image and likeness, capable of imitate your facial movements and conversations with your ideologue.

At a conference, Scharfe said his robotic clone, which currently sits and connected to a computer, you can walk down the street and interact with other people "in just a decade, if at that time advanced infrastructure is built, converging sources technological and took laboratory robots. " 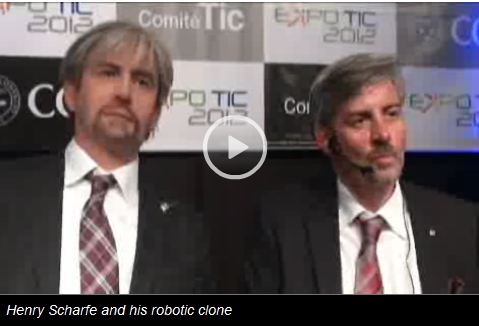