Has The Speediest Pulsar Been Found? Fastest Ever Seen

Researchers using three different telescopes -- NASA's Chandra X-ray Observatory and ESA's XMM-Newton in space, and the Parkes radio telescope in Australia -- may have found the fastest moving pulsar ever seen.

The evidence for this potentially record-breaking speed comes, in part, from the features highlighted in this composite image. X-ray observations from Chandra (green) and XMM-Newton (purple) have been combined with infrared data from the 2MASS project and optical data from the Digitized Sky Survey (colored red, green and blue, but appearing in the image as white).

Using Chandra, XMM-Newton, and the Parkes radio telescope, researchers have found evidence for what may be the fastest moving pulsar ever seen. The large field of view contains XMM-Newton data (purple) that contains supernova remnant, which as been combined infrared and optical data (colored red, green and blue that appears as white). The Chandra image in bright green shown in the inset ("X-ray close-up") reveals a comet-shaped X-ray source well outside the boundary of the supernova remnant. Astronomers think object is a pulsar that may be moving at about 6 million miles per hour, which would make it one of the fastest ever detected if confirmed. 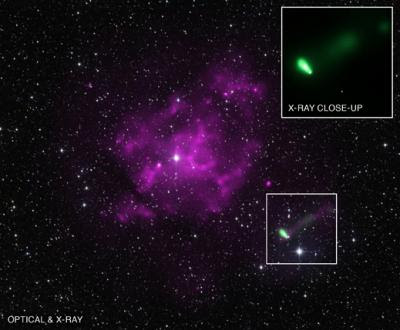 The large area of diffuse X-rays seen by XMM-Newton was produced when a massive star exploded as a supernova, leaving behind a debris field, or supernova remnant known as SNR MSH 11-16A. Shocks waves from the supernova have heated surrounding gas to several million degrees Kelvin, causing the remnant to glow brightly in X-rays.

The Chandra image shown in the inset ("X-ray close-up") reveals a comet-shaped X-ray source well outside the boundary of the supernova remnant. This source consists of a point-like object with a long tail trailing behind it for about 3 light years. The bright star nearby and also the one in SNR MSH11-16A are both likely to be foreground stars unrelated to the supernova remnant.


The point-like X-ray source was discovered by the International Gamma-Ray Astrophysics Laboratory, or INTEGRAL, and is called IGR J11014-6103 (or IGR J11014 for short). It may be a rapidly spinning, super-dense star (known as a "pulsar", a type of neutron star) that was ejected during the explosion. If so, it is racing away from the center of the supernova remnant at millions of miles per hour.

The favored interpretation for the tail of X-ray emission is that a pulsar wind nebula, that is, a "wind" of high-energy particles produced by the pulsar, has been swept behind a bow shock created by the pulsar's high speed. (A similar case was seen in another object known as PSR B1957+20 [http://chandra.harvard.edu/photo/2003/b1957/closer_look.html]).

The elongated emission is pointing towards the center of MSH 11-61A where the pulsar would have been formed, supporting the idea that the Chandra image is of a pulsar wind nebula and its bow shock. Another interesting feature of the Chandra image, also seen with XMM-Newton, is the faint X-ray tail extending to the top-right. The cause of this feature is unknown, but similar tails have been seen from other pulsars that also do not line up with the pulsar's direction of motion. 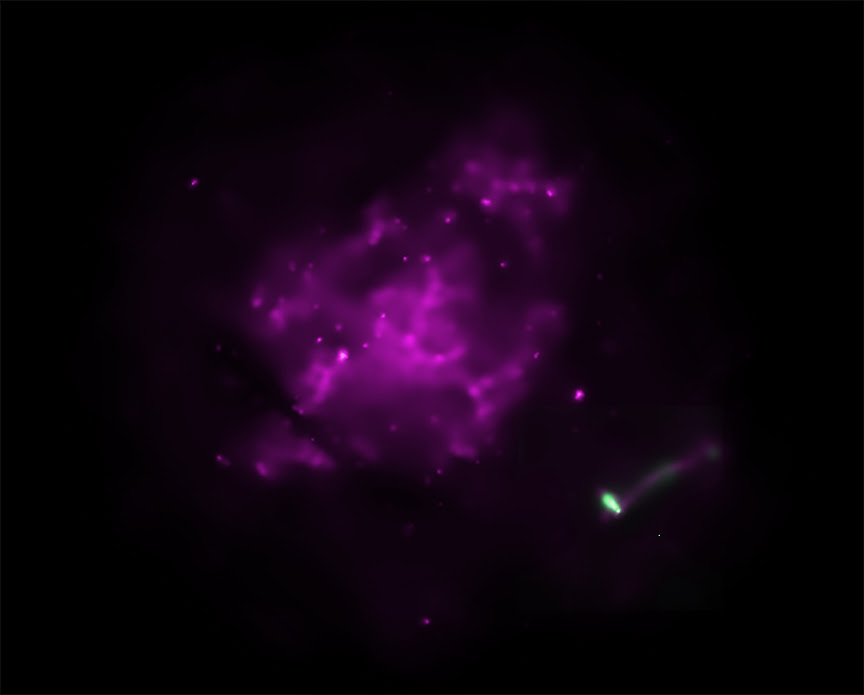 Based on earlier observations, astronomers estimate that the age of MSH 11-61A is approximately 15,000 years, and it lies at a distance of about 30,000 light years away from Earth. Combining these values with the distance that the pulsar has appeared to have traveled from the center of the MSH 11-61A, astronomers estimate that IGR J11014 is moving at a speed between 5.4 million and 6.5 million miles per hour.

One important caveat in the conclusion that IGR J11014 may be the fastest moving pulsar is that pulsations have not been detected in it during a search with the Commonwealth Scientific and Industrial Research Organization (CSIRO) Parkes radio telescope. This non-detection is not surprising for a pulsar located about 30,000 light years away.

However, there are other pieces of evidence that support the pulsar interpretation. First, the lack of detection of a counterpart to the X-ray source in optical or infrared images supports the idea that it is a pulsar, since such objects are very faint at these wavelengths. Also, there are no apparent differences in the brightness of the source between XMM-Newton observations in 2003 and the Chandra observations in 2011, behavior that is expected if IGR J11014 is a pulsar. Finally, the X-ray spectrum of the source, that is, its signature in energy, is similar to what astronomers expect to see for a pulsar.

These results were published in the May 10, 2012 issue of The Astrophysical Journal Letters. The authors were John Tomsick and Arash Bodaghee (University of California, Berkeley), Jerome Rodriguez and Sylvain Chaty (University of Paris, CEA Saclay), Fernando Camilo (Columbia University), Francesca Fornasini (UC Berkeley), and Farhid Rahoui (Harvard-Smithsonian Center for Astrophysics).