Half Of Inhaled Diesel Soot Gets Stuck In The Lungs

The exhaust from diesel-fuelled vehicles, wood fires and coal-driven power stations contains small particles of soot that flow out into the atmosphere. The soot is a scourge for the climate but also for human health. Now for the first time, researchers have studied in detail how diesel soot gets stuck in the lungs. The results show that more than half of all inhaled soot particles remain in the body.

The figure is higher than for most other types of particles. For example "only" 20 per cent of another type of particle from wood smoke and other biomass combustion gets stuck in the lungs. One explanation is that diesel soot is made up of smaller particles and can therefore penetrate deeper into the lungs, where it is deposited. The study was made on diesel particles (which mainly consist of soot) and was recently published in the Journal of Aerosol Science. Ten healthy people volunteered for the the study. 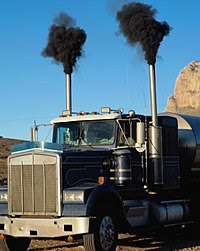 "Findings of this kind can be extremely useful both for researchers to determine what doses of soot we get into our lungs out of the amount we are exposed to, and to enable public authorities to establish well-founded limits for soot particles in outdoor air", says Jenny Rissler, researcher in aerosol technology at Lund University's Faculty of Engineering and responsible for publishing the study.

In population studies, other researchers have been able to observe that people who live in areas with high concentrations of particulates are more affected by both respiratory and cardiovascular diseases. But since there is no conclusive evidence that it is precisely the soot that is to blame, the authorities have so far not taken any decisions on guidelines.

"Currently there is no specific limit for soot particles in the air, despite the fact that soot in the air is linked to both lung cancer and other diseases", says Jenny Rissler.

But Jenny Rissler thinks that in the future, limits on soot levels will also be set, with reference to the WHO's recent reclassification of diesel exhaust from "probably carcinogenic" to "carcinogenic".

Soot particles are not only connected to effects on health but may also contribute to a warmer climate. Paradoxically, other types of aerosol particles can partly be desirable, insofar as they have a cooling effect on the climate and thereby mitigate the warming effect of carbon dioxide.

"Soot particles are black and absorbs light, thus producing a warming effect. So it could be a double advantage to reduce it", she observes.

Jenny Rissler will next be studying individual variations in lung deposition and exposing cells to soot. She is also in the process of further developing methods to measure the surface area of the particles, as this has shown to be an important indicator of their harmfulness.

Background: Every time we breathe, we inhale tiny airborne particles, so-called aerosol particles. Some occur naturally, while others are the result of human activity. Soot mainly belongs in the latter category, as a by-product of combustion from power stations to small-scale wood fires and decorative candles. Another common source of soot is the exhaust from diesel engines, even though modern diesel cars have considerably reduced emissions thanks to efficient filters. The EU will be tightening rules on emissions for heavy duty diesel vehicles in 2014.