Evidence Of Life On Mars Could Come From Martian Moon

A mission to a Martian moon could return with alien life, according to experts at Purdue University, but don't expect the invasion scenario presented by summer blockbusters like "Men in Black 3" or "Prometheus."

The image shows the orbits of the Martian moons Phobos and Deimos and the spread of potential particle trajectories from an asteroid impact on Mars. 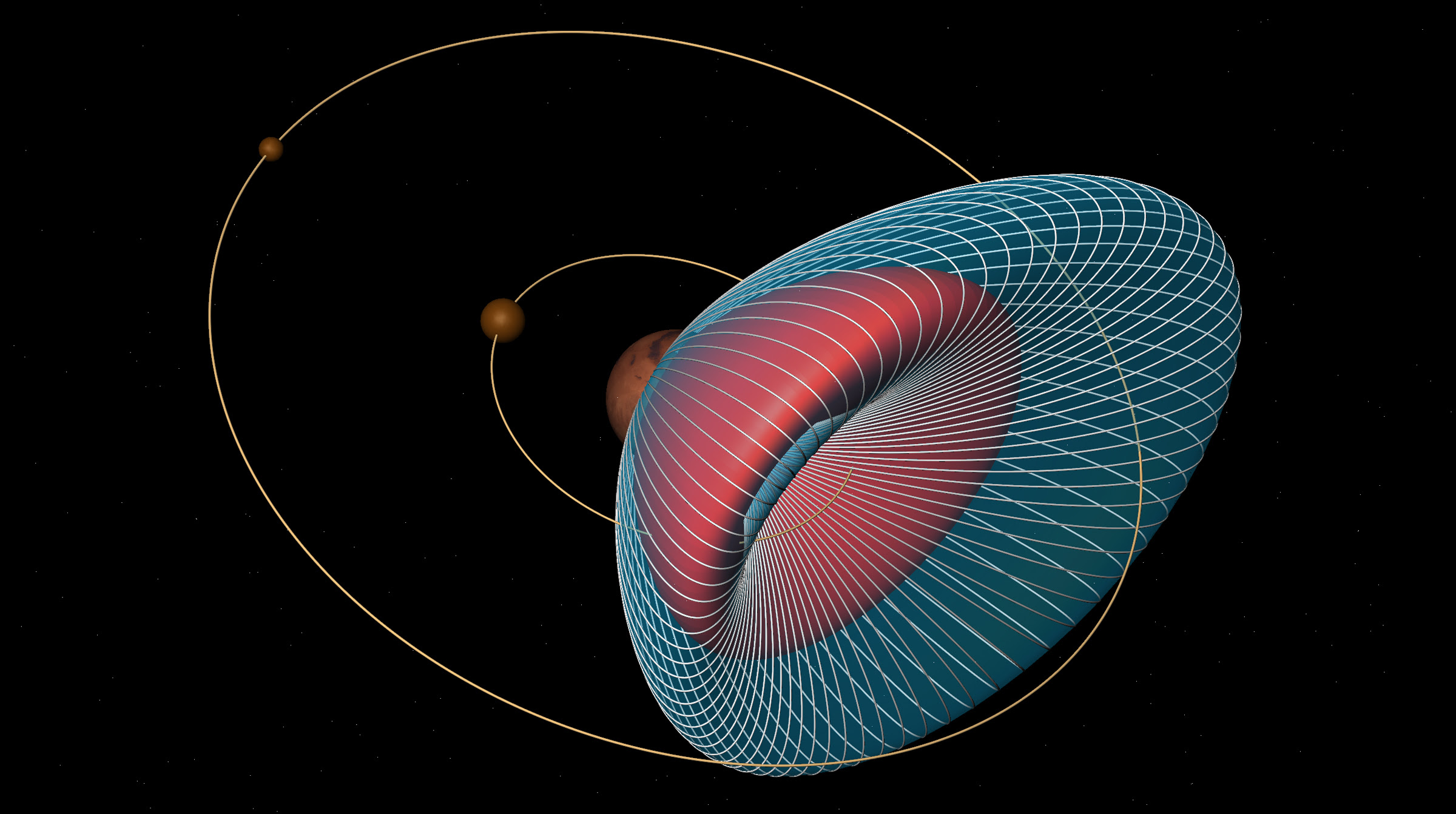 "We are talking little green microbes, not little green men," said Jay Melosh, a distinguished professor of earth, atmospheric and planetary sciences and physics and aerospace engineering at Purdue. "A sample from the moon Phobos, which is much easier to reach than the Red Planet itself, would almost surely contain Martian material blasted off from large asteroid impacts. If life on Mars exists or existed within the last 10 million years, a mission to Phobos could yield our first evidence of life beyond Earth."

Melosh led a team chosen by NASA's Planetary Protection Office to evaluate if a sample from Phobos could contain enough recent material from Mars to include viable Martian organisms. The study was commissioned to prepare for the failed 2011 Russian Phobos-Grunt mission, but there is continued international interest in a Phobos mission, he said. It will likely be a recurring topic as NASA reformulates its Mars Exploration Program.

A Phobos mission was discussed at NASA's Concepts and Approaches for Mars Explorationworkshop and a report issued Tuesday stated that the Martian moons are "important destinations that may provide much of the value of human surface exploration at reduced cost and risk."

Melosh collaborated with Kathleen Howell, the Hsu Lo Professor of Aeronautical and Astronautical Engineering, and graduate students Loic Chappaz and Mar Vaquero on the project. 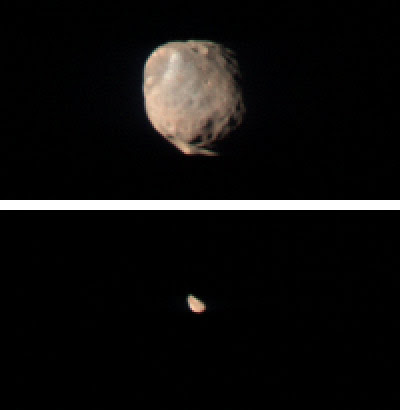 The researchers combined their expertise in impact cratering and orbital mechanics to determine how much material was displaced by particular asteroid impacts and whether individual particles would land on Phobos, the closer of the two Martian moons.

The team concluded that a 200-gram sample scooped from the surface of Phobos could contain, on average, about one-tenth of a milligram of Mars surface material launched in the past 10 million years and 50 billion individual particles from Mars. The same sample could contain as much as 50 milligrams of Mars surface material from the past 3.5 billion years.

NASA's Planetary Protection Office chose a team of Purdue University researchers to evaluate if a sample from the moon Phobos could contain enough material from Mars to include viable Martian organisms. The Purdue team stands with an image of possible particle trajectories from an asteroid impact. Standing from left are professors Kathleen Howell, Jay Melosh, and graduate students Loic Chappaz and Mar Vaquero. "The time frames are important because it is thought that after 10 million years of exposure to the high levels of radiation on Phobos, any biologically active material would be destroyed," Howell said. "Of course older Martian material would still be rich with information, but there would be much less concern about bringing a viable organism back to Earth and necessary quarantine measures."

When an asteroid hits the surface of a planet it ejects a cone-shaped spray of surface material, similar to the splash created when someone does a cannonball into a swimming pool. These massive impacts pulverize the surface material and scatter high-speed fragments. The team calculated that the bulk of the fragments from such a blast on Mars would be particles about one-thousandth of a millimeter in diameter, or 100 times smaller than a grain of sand, but similar in size to terrestrial bacteria.

The team followed the possible paths the tiny particles could take as they were hurtled from the planet's surface through space, examining possible speeds, angles of departure and orbital forces. The team plotted more than 10 million trajectories and evaluated which would intercept Phobos and where they might land on the moon during its eight-hour orbit around Mars. 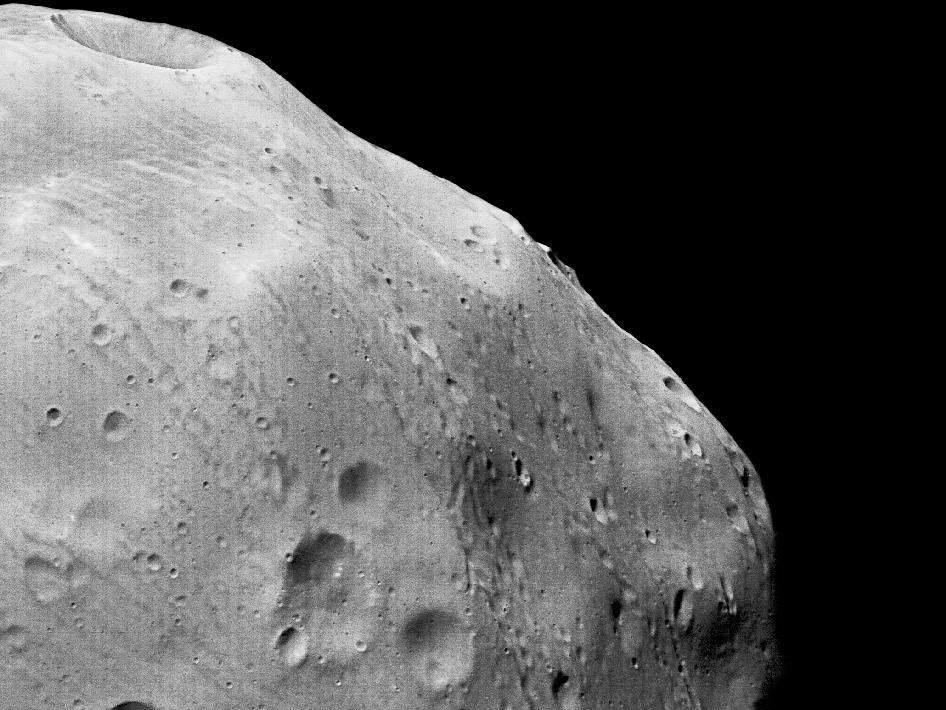 The probability of a particle landing on Phobos depends primarily on the power of the blast that launched it from the surface, Chappaz said.

"It is estimated that during the past 10 million years there have been at least four large impact events powerful enough to launch material into space, and we focused on several large craters as possible points of origin," he said. "It turns out that no matter where Phobos is in its orbit, it would have captured material from these powerful impact events."

After the team submitted its report, scientists identified a large, nearly 60-kilometers-in-diameter crater on Mars. The crater, named Mojave, is estimated to be less than 5 million years old, and its existence suggests that there would be an even greater amount of Martian material on Phobos that could contain viable organisms than estimated, Melosh said.

"It is not outside the realm of possibility that a sample could contain a dormant organism that might wake up when exposed to more favorable conditions on Earth," he said. "I participated in a study that found that living microbes can survive launch from impacts on rock, and other studies have shown some microscopic organisms can tolerate a lot of cosmic radiation."

This possibility has been a consideration for some time, and Michael Crichton's "The Andromeda Strain" brought it to public consciousness in 1969. However the movie scenario of a fatal contamination is unlikely, Melosh said.

"Approximately one ton of Martian material lands on Earth every year, " he said. "There is a lot more swapping back and forth of material within our solar system than people realize. In fact, we may owe our existence to life on Mars."

Howell also is optimistic that life is not unique to Earth.

"It's difficult to believe there hasn't been life somewhere out there in the vast expanse of space," Howell said. "The question is if the timeline overlaps with ours enough for us to recognize it. Even if we found no evidence of life in a sample from Phobos, it would not be a definitive answer to the question of whether or not there was life on Mars. There still may have been life that existed too long ago for us to detect it."

Melosh recently presented the team's findings at a joint NASA and European Space Agency meeting in Austria, and Chappaz will present the data at a meeting on July 14 in Mysore, India.