For the first time, researchers have found plant remains in the two-million-year-old dental plaque of ancient hominins’ teeth.

Australopithecus sediba, believed to be an early relative of modern-day humans, enjoyed a diet of leaves, fruits, nuts, and bark, which meant they probably lived in a more wooded environment than is generally thought, a surprising find published in the current issue of Nature magazine by an international team of researchers that includes a Texas A&M University anthropologist.

Almost two million years ago, an elderly female and young male of the speciesAustralopithecus sediba fell into a sinkhole, where their remains were quickly buried in sediment. In 2010, palaeoanthropologist Lee Berger of the University of the Witwatersrand in Johannesburg, South Africa, and his colleagues described the remains of this newly described hominin. Now the international team of scientists has studied the teeth of these specimens, which proved to have unique properties because of how the hominins died. 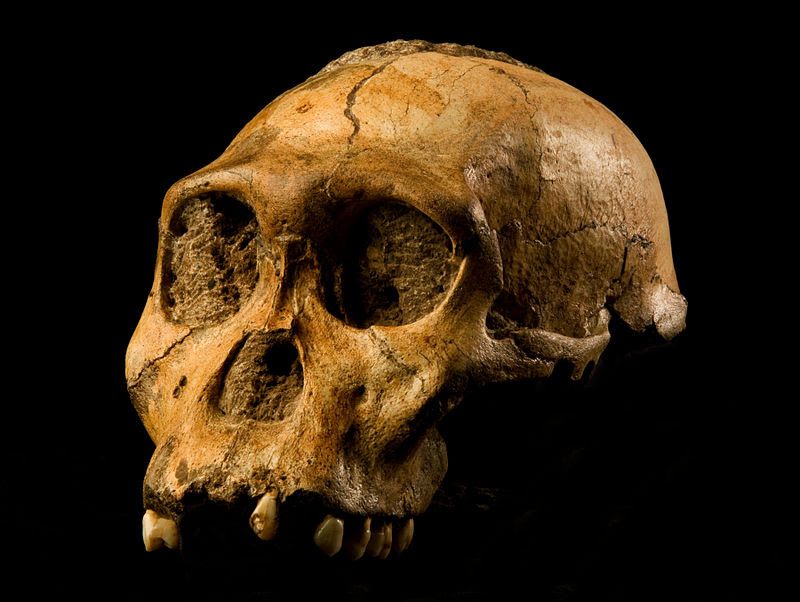 Darryl de Ruiter, associate professor in the Department of Anthropology, says the new findings are in contrast to previously documented diets of other hominin species and suggests that Australopithecus sediba had a different living environment than other hominins in the region. Previous research had shown that the australopiths of South Africa lived in the vicinity of grassy and open savannah-like areas, though it was unclear whether they actually occupied a savannah habitat, or if they lived in forested margins near the grasslands.


Upper jaw of the hominin Malapa: close-up of plaque on the front premolar. The team examined teeth from skeletal remains of a group of newly discovered hominins found several years ago in a South African cave about 30 miles northwest of Johannesburg and dated to about 1.98 million years old. The team, comprised of researchers from the United States, Africa, Europe and Australia, named the new speciesAustralopithecus sediba and demonstrated that it displayed a mosaic of both human-like and ape-like characteristics shared both with other forms of Australopithecus and with modern-day humans.

"By examining material recovered from their teeth using diverse tools ranging from dental picks and laser ablation devices, we were able to determine precisely what they were eating," de Ruiter explains.

"This gives us a very clear picture of their diet, and it was surprising. It shows that they ate more fruits and leaves than any other hominin fossil ever examined, more like what a chimp might eat. There was no evidence of them eating native grasses of the area at that time, which is what we see in other australopiths in the region."

Australopithecus is a genus of hominins that is now extinct. Ape-like in structure, yet walking bipedally similar to modern humans, they are considered to have played a significant role in human evolution, and it is generally held among anthropologists that a form of Australopithecus eventually evolved into modern humans.

The team comprised nine scientists from across the globe. Lead author was Amanda Henry of the Max Planck Institute for Evolutionary Anthropology in Germany, a specialist in dental calculus and plant remains. Other specialists on the multi-disciplinary team included dental microwear specialists, isotopic specialists and phytolith researchers - scientists who study the physical remains of ancient plants.

“The find is unprecedented in the human record outside of fossils just a few thousand years old. It’s the first truly direct evidence of what our early ancestors put in their mouths and chewed - what they ate,” said Berger. The research began when he noticed what appeared to be stains on the teeth and realized they were probably dental plaque or calculus, which is mineralized material that forms on teeth.
The Texas A&M anthropologist says the analysis of phytoliths – structures found in plants that often get trapped in plaque on teeth – alongside examination of the chemical makeup of the hominin teeth, suggests that they had a varied diet, and diet of early Australopithecus is a key component central to the study of human origins.

"It shows they had a diet more similar to that of a chimp than anything else," he notes, "though we cannot yet say how much overlap existed between the diets of hominins and chimps.

"They ate fruits, tree bark, nuts, leaves, and sedges, plants such as papyrus or cypress. They might also have consumed some type of animal protein, perhaps in the form of insects or meat, but a lot more research will be required before we can say for sure one way or the other.

"Our findings clearly show they had access to more food sources than we had previously established," he notes.


“We have a very unusual type of preservation,” said Peter Ungar of the University of Arkansas and scientist responsible for the dental microwear studies conducted in the research. “The state of the teeth was pristine.” Since the two individuals were buried underground and quickly encased in sediment, parts of the teeth were even preserved with a pocket of air surrounding them.

Because of this, the researchers were able to perform three different types of analysis on the fossils. Dental microwear analyses of the tooth surfaces and high-resolution isotope studies of the tooth enamel were conducted on these remarkably well-preserved teeth. The teeth also harboured another thing not studied before in early hominins – areas of preserved plaque build-up around the edges of the teeth. In this plaque the scientists found phytoliths, small silica bodies from plants eaten almost two million years ago by these early hominins.

“It’s the first time we’ve been able to look at these three things in one or two specimens,” Ungar said. Henry adds that “We hope this study provides an inspiration for similar interdisciplinary studies in the future. We've been very lucky to bring together such a diverse group of talented researchers.”

Using isotope analysis, dental microwear analysis and phytolith analysis, the researchers closed in on the diet of these two individuals, and what they found differs from other early human ancestors from that period. The microwear on the teeth showed more pits and complexity than most previously studied australopiths. Like the microwear, the isotopes also showed that the animals were consuming mostly parts of trees, shrubs or herbs rather than grasses.
The phytoliths gave an even clearer picture of what the animals were consuming, including bark, leaves, sedges, grasses, fruit and palm. Tests were conducted on the surrounding sediments to ensure the samples from the plaque were really part of the diet, and not contamination. “By testing the sediments in which the hominid was buried we can be sure that the phytoliths in the calculus were not from post depositional contamination,” said Marion Bamford of the University of the Witwatersrand, who worked on the phytolith analysis.

“Personally, I found the evidence for bark consumption the most surprising,” said Berger, “while primatologists have known for years that primates, including apes, eat bark as a fall-back food in times of need, I really hadn’t thought of it as a dietary item on the menu of an early human ancestor.”

Matt Sponheimer of the University of Colorado, Boulder, who worked on the isotopic research, elaborated on the importance of their results: “What we did was see what this ancient carbon told us about the diets of the Malapa hominins through a sort of laser dentistry, but with long-dead patients. The results suggested a different diet than we have found in other early hominins, and were rather like what we find in living chimpanzees. We were not expecting sediba to look unlikeAustralopithecus and Homo as various researchers had suggested affinities to one genus or the other, or both.”

Ungar adds “We get a sense of an animal that looked like it was taking advantage of forest resources”. This kind of food consumption differs from what had been seen in evidence from other australopiths. “They come out looking like giraffes in terms of their tooth chemistry. A lot of the other creatures there were not eating such forest resources.”

“These findings tell us a really interesting story about these two individuals,” Ungar said. Berger adds “To think that we have direct evidence of what these near humans put in their mouths and chewed, still preserved in their mouths after two million years. it is pretty remarkable.”

The team's work was funded by the National Science Foundation, the Smithsonian Institution, the Institute for Human Evolution at the University of Witwatersrand in Johannesburg, the Ray A. Rothrock '77 Fellowship in the College of Liberal Arts at Texas A&M and the Max Planck Society.
Contacts and sources:
Keith Randall