Colorful Light At The End Of The Tunnel For Radiation Detection

Known as spectral shape discrimination (SSD), the method takes advantage of a new class of nanoporous materials known as metal-organic frameworks (MOFs). Researchers discovered that adding a doping agent to an MOF leads to the emission of red and blue light when the MOF interacts with high-energy particles emanated from radiological or nuclear material, enabling more effective detection of neutrons. Neutron detection is currently a costly and technically challenging endeavor due to the difficulty in distinguishing neutrons from ubiquitous background gamma rays. 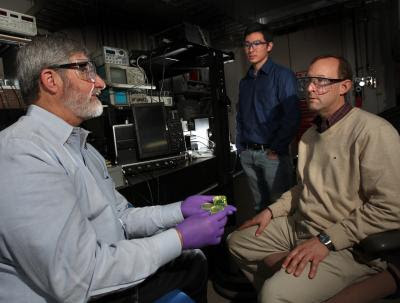 Initial work on the use of MOFs for radiation detection was internally funded by Sandia's Laboratory Directed Research and Development (LDRD) program, but subsequent funding for the project has come from the National Nuclear Security Administration's (NNSA) Defense Nuclear Nonproliferation research office.

The new technology works with plastic scintillators, materials that fluoresce when struck by charged particles or high-energy photons, making it suitable for commercialization by companies who produce plastic and other organic scintillators used in radiation detection devices. Though work remains before it can move into the marketplace, Sandia is currently seeking commercial partners to license the technology.

(See a video clip at www.youtube.com/SandiaLabs)

Current radiation detection methods are limited in terms of speed and sensitivity, crucial elements for dynamic scenarios, such as border crossings, cargo screenings and nuclear treaty verification. This new technology monitors the color of light emissions, which have the potential to make the screening process easier and more reliable.

Crystals of a metal organic framework (left) emit light in the blue (middle) when exposed to ionizing radiation. Infiltrating them with an organometallic compound causes the crystals to emit red light as well (right), creating a new way to differentiate fission neutrons from background gamma particles.

"We are approaching the problem from a materials-chemistry perspective," said Sandia materials scientist Mark Allendorf. "Fundamentally, it is easier to monitor the color of light emissions rather than the rate at which that light is emitted. That's the crux of this new approach." Current radiation detection methods use time to discriminate between neutrons and gamma rays, requiring complex and costly electronics.

Allendorf and his team have been working with MOFs for more than five years. Early on, they discovered a fluorescent, porous MOF with superb scintillation properties, an important breakthrough and the first new class of scintillators found in decades. The MOF's porosity is a key feature because it allows researchers to add other materials to fine-tune the scintillation.

The MOF's nanoporosity triggered a new idea when team member Patrick Doty read about the use of dopants to increase the efficiency of organic light-emitting diodes (OLEDs). These dopants, usually compounds containing heavy metals such as iridium, dramatically increase OLED brightness by "scavenging" the excited-state energy in the device that was not converted to light. This energy represents as much as 75 percent of the possible light output.

Combining MOFs with OLED dopants led to a second breakthrough. By filling MOF pores with dopants, the team created a material that not only produces more light, but light of another color. Doty, a materials scientist working in Sandia's radiation/nuclear detection materials and analysis department, hypothesized that the discovery could be applied to radiation detection.

The trick, Doty said, is to add just the right amount of dopant so that both the scavenged light and fluorescence from the excited MOF itself are emitted. Then the ratio of the intensities at the two wavelengths is a function of the type of high-energy particle interacting with the material. "That's the critical thing," Doty said. "SSD allows one particle type to be distinguished from another on the basis of the color of the emitted light."

Because the ratio of neutrons to gamma rays is so low — on the order of one neutron to 105 gamma rays — the threshold at which current detectors can see neutrons is fairly high. Sandia calculations suggest that the threshold for detecting neutrons produced by fissionable material could be lowered substantially using SSD, perhaps improving the "figure of merit" by a factor of 10 compared to the current standards. "In principle, we could quadruple the sensitivity of the gold standard," said Allendorf.

SSD also addresses another radiation detection problem — active interrogation. Using an active source to create a signal from special nuclear material is an effective means for detection, say Sandia researchers. But current detectors are often overwhelmed by the onslaught of gamma rays. The new materials developed at Sandia can be tuned for improved timing performance at high rates, and the new technology also could be used in radiation detectors for treaty verification.