Astronomers using data from the European Space Agency's XMM-Newton satellite have found a long-sought X-ray signal from NGC 4151, a galaxy that contains a supermassive black hole. When the black hole's X-ray source flares, its accretion disk brightens about half an hour later. The discovery promises a new way to unravel what's happening in the neighborhood of these powerful objects

Most big galaxies host a big central black hole containing millions of times the sun's mass. When matter streams toward one of these supermassive black holes, the galaxy's center lights up, emitting billions of times more energy than the sun. For years, astronomers have been monitoring such "active galactic nuclei" (AGN) to better understand what happens on the brink of a monster black hole.

"Our analysis allows us to probe black holes through a different window. It confirms some long-held ideas about AGN and gives us a sense of what we can expect when a new generation of space-based X-ray telescopes eventually becomes available," said Abderahmen Zoghbi, a postdoctoral research associate at the University of Maryland at College Park (UMCP) and the study's lead author.

One of the most important tools for astronomers studying AGN is an X-ray feature known as the broad iron line, now regarded as the signature of a rotating black hole. Excited iron atoms produce characteristic X-rays with energies around 6,000 to 7,000 electron volts -- several thousand times the energy in visible light – and this emission is known as the iron K line.

The galaxy NGC 4151 is located about 45 million light-years away toward the constellation Canes Venatici. Activity powered by its central black hole makes NGC 4151 one of the brightest active galaxies in X-rays. 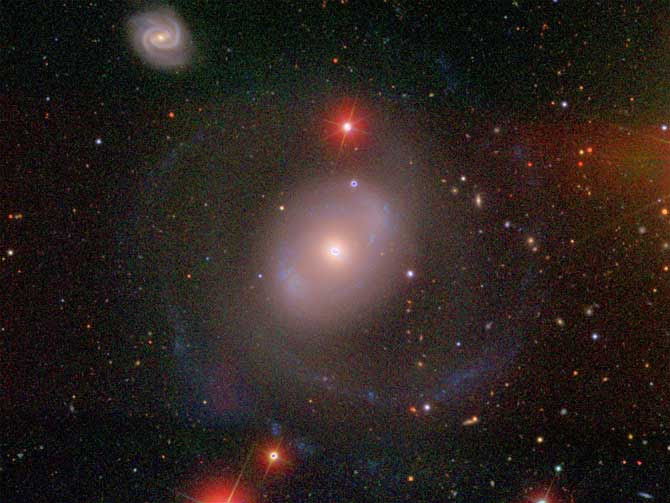 Matter falling toward a black hole collects into a rotating accretion disk, where it becomes compressed and heated before eventually spilling over the black hole's event horizon, the point beyond which nothing can escape and astronomers cannot observe. A mysterious and intense X-ray source near the black hole shines onto the disk's surface layers, causing iron atoms to radiate K-line emission. The inner part of the disk is orbiting the black hole so rapidly that the effects of Einstein's relativity come into play -- most notably, how time slows down close to the black hole. These relativistic effects skew or broaden the signal in a distinctive way.

Astronomers predicted that when the X-ray source near the black hole flared, the broad iron K line would brighten after a delay corresponding to how long the X-rays took to reach and illuminate the accretion disk. Astronomers call the process relativistic reverberation. With each flare from the X-ray source, a light echo sweeps across the disk and the iron line brightens accordingly.

This illustration compares the environment around NGC 4151's supermassive black hole with the orbits of the planets in our solar system; the planets themselves are not shown to scale. Echoes of X-ray flares detected in XMM-Newton data demonstrate that the X-ray source (blue sphere, center) is located above the black hole's accretion disk. The time lag between flares in the source and their reflection in the accretion disk places the X-ray source about four times Earth's distance from the sun. 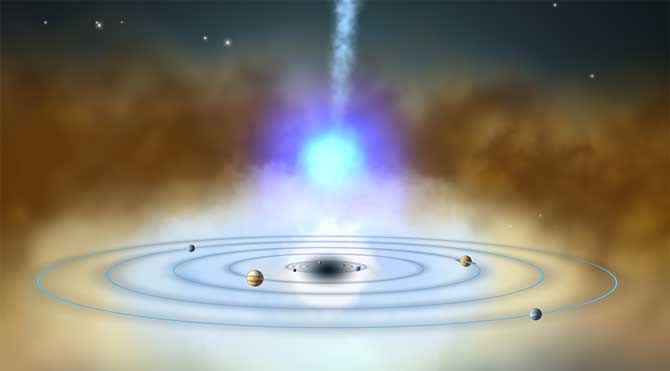 The team reasoned that detecting the combined echoes from multiple flares might be possible if a sufficiently large amount of data from the right object could be analyzed. The object turned out to be the galaxy NGC 4151, which is located about 45 million light-years away in the constellation Canes Venatici. As one of the brightest AGN in X-rays, NGC 4151 has been observed extensively by XMM-Newton. Astronomers think that the galaxy's active nucleus is powered by a black hole weighing 50 million solar masses, which suggested the presence of a large accretion disk capable of producing especially long-lived and easily detectable echoes.

Since 2000, XMM-Newton has observed the galaxy with an accumulated exposure of about four days. By analyzing this data, the researchers uncovered numerous X-ray echoes, demonstrating for the first time the reality of relativistic reverberation. The findings appear in the May 8 issue of Monthly Notices of the Royal Astronomical Society.

The team found that echoes lagged behind the AGN flares by a little more than 30 minutes. Moving at the speed of light, the X-rays associated with the echo must have traveled an additional 400 million miles -- equivalent to about four times Earth's average distance from the sun -- than those that came to us directly from the flare.

"This tells us that the mysterious X-ray source in AGN hovers at some height above the accretion disk," said co-author Chris Reynolds, a professor of astronomy at UMCP and Zoghbi's adviser. Jets of accelerated particles often are associated with AGN, and this finding meshes with recent suggestions that the X-ray source may be located near the bases of these jets.

"The data show that the earliest echo comes from the most broadened iron line emission. This originates from closest to the black hole and fits well with expectations," said co-author Andy Fabian, an astrophysicist at the University of Cambridge in England.

Amazingly, the extreme environment at the heart of NGC 4151 is built on a scale comparable to our own solar system. If we replaced the sun with the black hole, the event horizon would extend less than halfway to Earth if the black hole spins rapidly; slower spin would result in a larger horizon. The X-ray source would hover above the black hole and its accretion disk at a distance similar to that between the sun and the middle of the asteroid belt.

"Teasing out the echo of X-ray light in NGC 4151 is a remarkable achievement. This work propels the science of AGN into a fundamental new area of mapping the neighborhoods of supermassive black holes," said Kimberly Weaver, an astrophysicist at NASA's Goddard Space Flight Center in Greenbelt, Md., who was not involved in the study. NASA Goddard hosts the XMM-Newton Guest Observer Facility, which supports U.S. astronomers who request observing time on the satellite.

The detection of X-ray echoes in AGN provides a new way of studying black holes and their accretion disks. Astronomers envision the next generation of X-ray telescopes with collecting areas large enough to detect the echo of a single AGN flare in many different objects, thereby providing astronomers with a new tool for testing relativity and probing the immediate surroundings of massive black holes.