A University of Delaware-led research team reports an advance in the June 1 issue of Science that may help astrophysicists more accurately analyze the vast molecular clouds of gas and dust where stars are born.

Krzysztof Szalewicz, professor of physics and astronomy at UD, was the principal investigator on the National Science Foundation funded research project, which solved equations of quantum mechanics to more precisely describe the interactions between molecules of hydrogen and carbon monoxide, the two most abundant gases in space.

The vast Orion Nebula is a celestial maternity ward crowded with newborn stars, some 1,500 light years away. 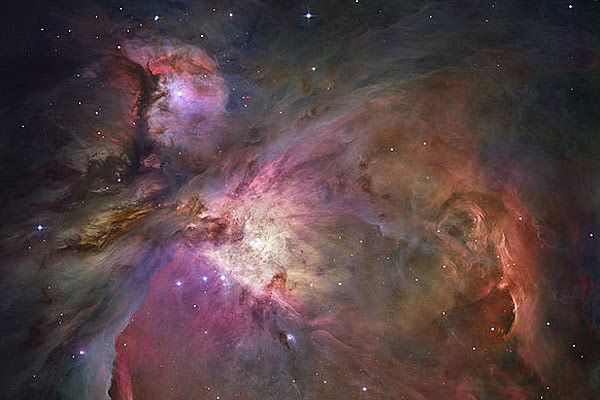 Such calculations are important to spectroscopy, the science that identifies atoms or molecules by the color of light they absorb or emit. Sir Isaac Newton discovered that sunlight shining through a prism would separate into a rainbow of colors. Today, spectroscopy is essential to fields ranging from medical diagnostics to airport security.

In astrophysics, spectrometers attached to telescopes orbiting in space measure light across the visible, infrared, and microwave spectrum to detect and quantify the abundance of chemical elements and molecules, as well as their temperatures and densities, in places such as the vast Orion Nebula, a celestial maternity ward crowded with newborn stars, some 1,500 light years away.

Whereas carbon monoxide — the second-most abundant molecule in space — is easily detected by spectrometers, such is not the case for hydrogen. Despite ranking as the most abundant molecule in space, hydrogen emits and absorbs very little light in the spectral ranges that can be observed. Thus, researchers must deduce information about molecular hydrogen from its weak interactions with carbon monoxide in the interstellar medium (the stuff between the stars).

“The hydrogen spectra get lost on the way, but carbon monoxide is like a lighthouse — its spectra are observed more often than those of any other molecule,” Szalewicz says. “You can indirectly tell what the density of hydrogen is from the carbon monoxide spectra.”

Szalewicz and co-authors Piotr Jankowski, a former UD postdoctoral researcher who is now on the chemistry faculty at Nicolaus Copernicus University in Torun, Poland, and A. Robert W. McKellar, from the National Research Council in Ottawa, Canada, wanted to revisit the spectra of the hydrogen and carbon monoxide complex. The first time such a calculation was done was 14 years ago by Szalewicz and Jankowski, parallel to an accurate measurement by McKellar.

In their computational model, the scientists needed to determine first how electrons move around nuclei. To this end, they included simultaneous excitations of up to four electrons at a time. The energy levels produced by the rotations and vibrations of the nuclei then were computed and used to build a theoretical spectrum that could be compared with the measured one.

The team’s calculations, accomplished with the high-powered kolos computing cluster at UD, have resulted in theoretical spectra 100 times more accurate than those published 14 years ago. The theoretical and experimental spectra are now in near-perfect agreement, which allowed the team to “assign” the spectrum, that is, to determine how each spectral feature is related to the underlying motion of the nuclei, Szalewicz says.

The combined theoretical and experimental knowledge about this molecular complex now can be used to analyze recent results from satellite observatories to search for its direct spectral signal. Even more importantly, this knowledge can be used to get better information about the hydrogen molecule in space from indirect observations, Szalewicz notes.

“Spectroscopy provides the most precise information about matter that is available,” he says. “I am pleased that our computations have untangled such a complex problem.”

Szalewicz’s expertise is in numerically solving the equations for the motions of electrons resulting in molecules attracting or repelling each other and then using these interactions to look at different properties of clusters and condensed phases of matter.

His research has unveiled hidden properties of water and found a missing state in the beryllium dimer, both results previously reported in Science, and his findings about heliummay lead to more accurate standards for measuring temperature and pressure.

Szalewicz was elected to the International Academy of Quantum Molecular Science in 2010 and is a fellow of the American Physical Society.

Contacts and sources:
Article by Tracey Bryant
University of Delaware
on May 31, 2012