The police use of stun guns increases the risk of injuries for those on the receiving end, but tends to increase officer safety, according to the most comprehensive study of such devices to date.

But when officers use stun guns in conjunction with other restraint methods, they also face an increase risk of injury. 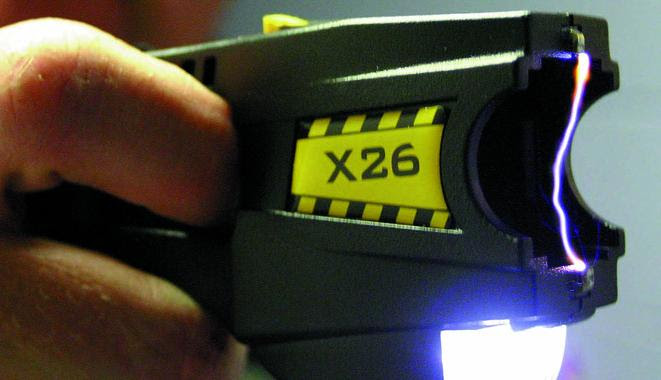 Those are the conclusions of two joint studies from the University of Central Florida and Michigan State University recently published in the journals, Justice Quarterly and Police Quarterly.

The studies looked at injuries associated with conducted energy devices , also known as stun guns. CEDs produce an electrical charge up to 50,000 volts and can be deployed by pressing the device against a person or by shooting two probed darts at a person from a distance. The charge temporarily immobilizes individuals. Their use has been controversial because of some reported deaths following the use of stun guns, as well as their use on vulnerable citizens such as pregnant women, the elderly, and children.

The UCF/MSU team analyzed nearly 14,000 incidents from seven agencies in their studies. Of those, CEDs were used in more than 2,600 cases.

"The bottom line is there in an increased risk to citizens," said Gene Paoline a UCF associate professor of criminal justice and one of the authors of the studies. "On the other hand, the devices increase the safety of officers when used as the sole method of restraint. In essence, we have to consider the costs of citizen harm versus benefits of officer safety. It is something for police agencies to weigh when setting up policies on their use, or whether or not to even use them at all. CEDs may not be the silver bullet some make them out to be."

The use of CEDs has been increasing since the late 1970s. A 2008 study by the National Institute of Justice reported that roughly 11,500 law enforcement agencies have CEDs, with approximately 260,000 in use.

Studies in the past have shown that the use of CEDs was safer because more forceful methods were avoided, such as using a gun. But those who question such findings, such as Paoline and colleagues, point out that injuries weren't correctly being counted in many of those studies. They contend that a suspect's lacerations, burns and abrasions that are the result of the discharge of the device should be counted as injuries. Others say that those minor injuries should not be counted because they are an expected outcome of the weapon.

"An injury is an injury," he said. "If we count a laceration from hand cuffing, or a bruise from a baton, we have to do the same for the CED."

Paoline joined UCF in 2001. He has multiple degrees including a Ph.D. in Criminal Justice from the University at Albany, State University of New York. His research specialty focuses on policing and theoretical development in criminal justice. He is the author of Rethinking Police Culture (2001, LFB Scholarly Publishing), and a frequent presenter at conferences on the topics of police use of force, police culture, and the occupational attitudes of criminal justice personnel.

UCF Stands For Opportunity --The University of Central Florida is a metropolitan research university that ranks as the second largest in the nation with more than 58,000 students. UCF's first classes were offered in 1968. The university offers impressive academic and research environments that power the region's economic development. UCF's culture of opportunity is driven by our diversity, Orlando environment, history of entrepreneurship and our youth, relevance and energy. For more information visithttp://news.ucf.edu

Contacts and sources:
Zenaida Kotala
University of Central Florida
on May 29, 2012