SpaceX's Dragon capsule splashed down in the Pacific Ocean at 11:42 a.m. EDT a few hundred miles west of Baja California, Mexico, marking a successful end to the first mission by a commercial company to resupply the International Space Station.

The SpaceX Dragon capsule pauses near the International Space Station so the robotic arm can grapple and berth it to a port on the station. 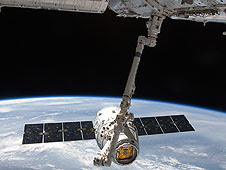 "Congratulations to the teams at SpaceX and NASA who worked hard to make this first commercial mission to the International Space Station an overwhelming success," NASA Administrator Charles Bolden said. "This successful splashdown and the many other achievements of this mission herald a new era in U.S. commercial spaceflight. American innovation and inspiration have once again shown their great strength in the design and operation of a new generation of vehicles to carry cargo to our laboratory in space. Now more than ever we're counting on the inventiveness of American companies and American workers to make the International Space Station and other low Earth orbit destinations accessible to any and all who have dreams of space travel."

The Dragon capsule will be taken by boat to a port near Los Angeles, where it will be prepared for a return journey to SpaceX's test facility in McGregor, Texas, for processing. Some cargo will be removed at the port in California and returned to NASA within 48 hours. The remainder will be returned to Texas with the capsule.

The capsule delivered to the station 1,014 pounds of supplies including experiments, food, clothing and technology. On its return trip to Earth, the capsule carried science experiments that will be returned to researchers hoping to gain new insights provided by the unique microgravity environment in the station's laboratories. In addition to the experiments, Dragon returned a total of 1,367 pounds of hardware and cargo no longer needed aboard the station.

Dragon's journey to the space station was SpaceX's second demonstration mission under NASA's Commercial Orbital Transportation Services (COTS) Program, which provides investments to stimulate the commercial space industry in America. The mission began May 22 as the capsule launched from Cape Canaveral Air Force Station in Florida aboard a SpaceX Falcon 9 rocket. Following a series of tests of its maneuverability and abort systems, the capsule was grappled and berthed to the space station by the crew members of Expedition 31 aboard the orbiting complex.

In the next several weeks, NASA will evaluate the Dragon capsule's mission performance to close out remaining COTS milestones. Once that work is completed NASA and SpaceX will set the target date for the company's first full cargo mission.

In addition to fostering the development of new American cargo vehicles, NASA also is helping spur innovation and development of new spacecraft and launch vehicles from the commercial industry to develop safe, reliable and cost-effective capabilities to transport astronauts to low Earth orbit and the space station.

NASA also is developing the Orion spacecraft and Space Launch System (SLS), a crew capsule and heavy-lift rocket that will provide an entirely new capability for human exploration beyond low Earth orbit. Designed to be flexible for launching spacecraft for crew and cargo missions, SLS and Orion will expand human presence beyond low Earth orbit and enable new missions of exploration across the solar system.

For SpaceX mission information and a schedule of NASA TV coverage, visit:
http://www.nasa.gov/spacex

For more information about the International Space Station, visit:
http://www.nasa.gov/station