On May 17, 2012 an M-class flare exploded from the sun. The eruption also shot out a burst of solar particles traveling at nearly the speed of light that reached Earth about 20 minutes after the light from the flare. An M-class flare is considered a "moderate" flare, at least ten times less powerful than the largest X-class flares, but the particles sent out on May 17 were so fast and energetic that when they collided with atoms in Earth's atmosphere, they caused a shower of particles to cascade down toward Earth's surface. The shower created what's called a ground level enhancement (GLE).

This graph shows the neutrons detected by a neutron detector at the University of Oulu in Finland from May 16 through May 18, 2012. The peak on May 17 represents an increase in the number of neutrons detected, a phenomenon dubbed a ground level enhancement or GLE. This was the first GLE since December of 2006. 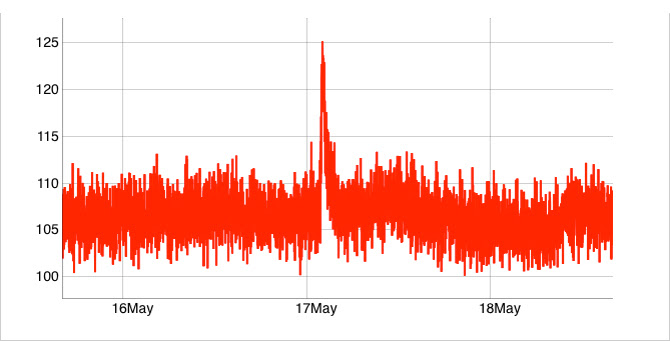 GLEs are quite rare – fewer than 100 events have been observed in the last 70 years, since instruments were first able to detect them. Moreover, this was the first GLE of the current solar cycle--a sure sign that the sun's regular 11-year cycle is ramping up toward solar maximum.

This GLE has scientists excited for another reason, too. The joint Russian/Italian mission PAMELA, short for Payload for Antimatter Matter Exploration and Light-nuclei Astrophysics, simultaneously measured the particles from the sun that caused the GLE. Solar particles have been measured before, but PAMELA is sensitive to the very high-energy particles that reach ground level at Earth. The data may help scientists understand the details of what causes this space weather phenomenon, and help them tease out why a relatively small flare was capable of producing the high-speed particles needed to cause a GLE.

"Usually we would expect this kind of ground level enhancement from a giant coronal mass ejection or a big X-class flare," says Georgia de Nolfo, a space scientist who studies high speed solar particles at NASA's Goddard Space Flight Center in Greenbelt, Md. "So not only are we really excited that we were able to observe these particularly high energy particles from space, but we also have a scientific puzzle to solve."

The path to this observation began on Saturday, May 5, when a large sunspot rotated into view on the left side of the sun. The sunspot was as big as about 15 Earths, a fairly sizable active region, though by no means as big as some of the largest sunspots that have been observed on the sun. Dubbed Active Region 1476, the sunspots had already shown activity on the back side of the sun—as seen by a NASA mission called the Solar Terrestrial Relations Observatory (STEREO) -- so scientists were on alert for more. Scientists who study high-energy particles from the sun had been keeping their eye out for just such an active region because they had seen no GLEs since December of 2006.

An artist's concept of the shower of particles produced when Earth's atmosphere is struck by ultra-high-energy cosmic rays. 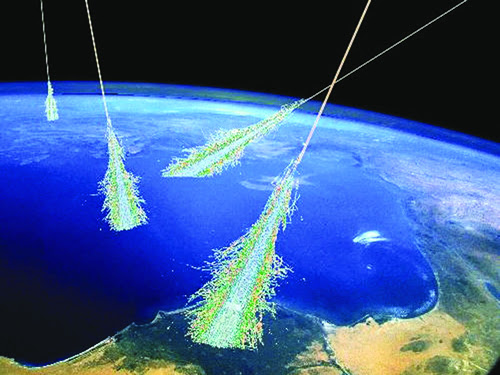 In addition, they had high hopes that the PAMELA mission, which had focused on cosmic rays from outside our galaxy could now be used to observe solar particles. Such "solar cosmic rays" are the most energetic particles that can be accelerated at or near the sun.

But there was a hitch: the satellite carrying the PAMELA instruments were not currently usable since they were in calibration mode. Scientists including de Nolfo and another Goddard researcher, Eric Christian, let the PAMELA collaboration know that this might be the chance they had been waiting for and they convinced the Russian team in charge of the mission to turn the instruments back on to science mode.

"And then the active region pretty much did nothing for two weeks," says Christian. "But just before it disappeared over the right side of the sun, it finally erupted with an M-class flare."

Bingo. Neutron monitors all over the world detected the shower of neutrons that represent a GLE. Most of the time the showers are not the solar energetic particles themselves, but the resultant debris of super-fast particles slamming into atoms in Earth's atmosphere. The elevated levels of neutrons lasted for an hour.

Simultaneously, PAMELA recorded the incoming solar particles up in space, providing one of the first in-situ measurements of the stream of particles that initiated a GLE. Only the early data has been seen so far, but scientists have high hopes that as more observations are relayed down to Earth, they will be able to learn more about the May 17 onslaught of solar protons, and figure out why this event triggered a GLE when earlier bursts of solar protons in January and March, 2012 didn't.

PAMELA is a space-borne experiment of the WiZard collaboration, which is an international collaboration between Italian (I.N.F.N. – Istituto Nazionale di Fisica Nucleare), Russian, German and Swedish institutes, realized with the main support of the Italian (ASI) and Russian (Roscosmos) Space Agencies.