The Milky Way and Andromeda are speeding towards a head on collision at 250,000 miles per hour due to gravity and the speed will increase as the two get closer. The two galaxies will merge into a new galaxy and our solar system will likely survive intact to become part of the new galaxy. The most significant change expected is that our solar system will be further from the galactic center.

NASA astronomers announced Thursday they can now predict with certainty the next major cosmic event to affect our galaxy, sun, and solar system: the titanic collision of our Milky Way galaxy with the neighboring Andromeda galaxy.

The Milky Way is destined to get a major makeover during the encounter, which is predicted to happen four billion years from now. It is likely the sun will be flung into a new region of our galaxy, but our Earth and solar system are in no danger of being destroyed.

This illustration shows a stage in the predicted merger between our Milky Way galaxy and the neighboring Andromeda galaxy, as it will unfold over the next several billion years. In this image, representing Earth's night sky in 3.75 billion years, Andromeda (left) fills the field of view and begins to distort the Milky Way with tidal pull. 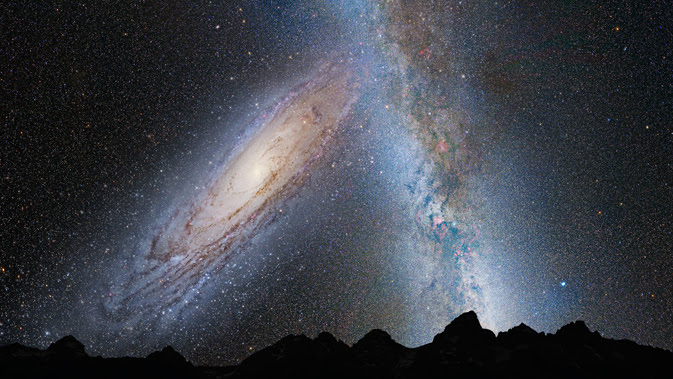 "Our findings are statistically consistent with a head-on collision between the Andromeda galaxy and our Milky Way galaxy," said Roeland van der Marel of the Space Telescope Science Institute (STScI) in Baltimore.

The solution came through painstaking NASA Hubble Space Telescope measurements of the motion of Andromeda, which also is known as M31. The galaxy is now 2.5 million light-years away, but it is inexorably falling toward the Milky Way under the mutual pull of gravity between the two galaxies and the invisible dark matter that surrounds them both.

This animation depicts the collision between our Milky Way galaxy and the Andromeda galaxy. Hubble Space Telescope observations indicate that the two galaxies, pulled together by their mutual gravity, will crash together about 4 billion years from now. Around 6 billion years from now, the two galaxies will merge to form a single galaxy. The video also shows the Triangulum galaxy, which will join in the collision and perhaps later merge with the Andromeda/Milky Way pair.

"After nearly a century of speculation about the future destiny of Andromeda and our Milky Way, we at last have a clear picture of how events will unfold over the coming billions of years," said Sangmo Tony Sohn of STScI.

The scenario is like a baseball batter watching an oncoming fastball. Although Andromeda is approaching us more than 2,000 times faster, it will take 4 billion years before the strike.

Computer simulations derived from Hubble's data show that it will take an additional two billion years after the encounter for the interacting galaxies to completely merge under the tug of gravity and reshape into a single elliptical galaxy similar to the kind commonly seen in the local universe.

Although the galaxies will plow into each other, stars inside each galaxy are so far apart that they will not collide with other stars during the encounter. However, the stars will be thrown into different orbits around the new galactic center. Simulations show that our solar system will probably be tossed much farther from the galactic core than it is today.

To make matters more complicated, M31's small companion, the Triangulum galaxy, M33, will join in the collision and perhaps later merge with the M31/Milky Way pair. There is a small chance that M33 will hit the Milky Way first.

This illustration shows the collision paths of our Milky Way galaxy and the Andromeda galaxy. The galaxies are moving toward each other under the inexorable pull of gravity between them. Also shown is a smaller galaxy, Triangulum, which may be part of the smashup. 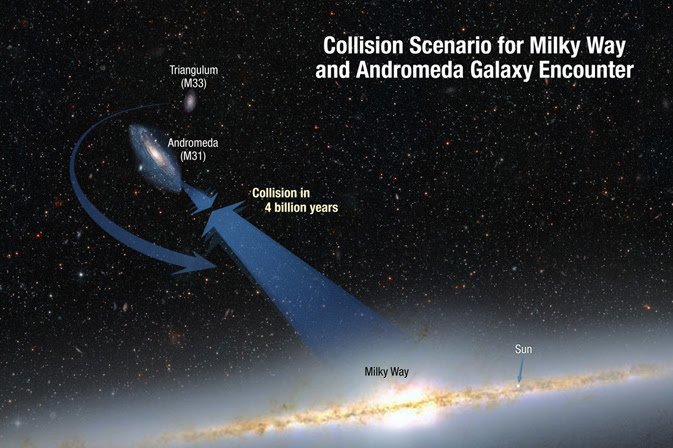 The universe is expanding and accelerating, and collisions between galaxies in close proximity to each other still happen because they are bound by the gravity of the dark matter surrounding them. The Hubble Space Telescope's deep views of the universe show such encounters between galaxies were more common in the past when the universe was smaller.

A century ago astronomers did not realize that M31 was a separate galaxy far beyond the stars of the Milky Way. Edwin Hubble measured its vast distance by uncovering a variable star that served as a "milepost marker."

Hubble went on to discover the expanding universe where galaxies are rushing away from us, but it has long been known that M31 is moving toward the Milky Way at about 250,000 miles per hour. That is fast enough to travel from here to the moon in one hour. The measurement was made using the Doppler effect, which is a change in frequency and wavelength of waves produced by a moving source relative to an observer, to measure how starlight in the galaxy has been compressed by Andromeda's motion toward us.

Previously, it was unknown whether the far-future encounter will be a miss, glancing blow, or head-on smashup. This depends on M31’s tangential motion. Until now, astronomers had not been able to measure M31's sideways motion in the sky, despite attempts dating back more than a century. The Hubble Space Telescope team, led by van der Marel, conducted extraordinarily precise observations of the sideways motion of M31 that remove any doubt that it is destined to collide and merge with the Milky Way.

"This was accomplished by repeatedly observing select regions of the galaxy over a five- to seven-year period," said Jay Anderson of STScI.

"In the worst-case-scenario simulation, M31 slams into the Milky Way head-on and the stars are all scattered into different orbits," said Gurtina Besla of Columbia University in New York, N.Y. "The stellar populations of both galaxies are jostled, and the Milky Way loses its flattened pancake shape with most of the stars on nearly circular orbits. The galaxies' cores merge, and the stars settle into randomized orbits to create an elliptical-shaped galaxy."

This series of photo illustrations shows the predicted merger between our Milky Way galaxy and the neighboring Andromeda galaxy. 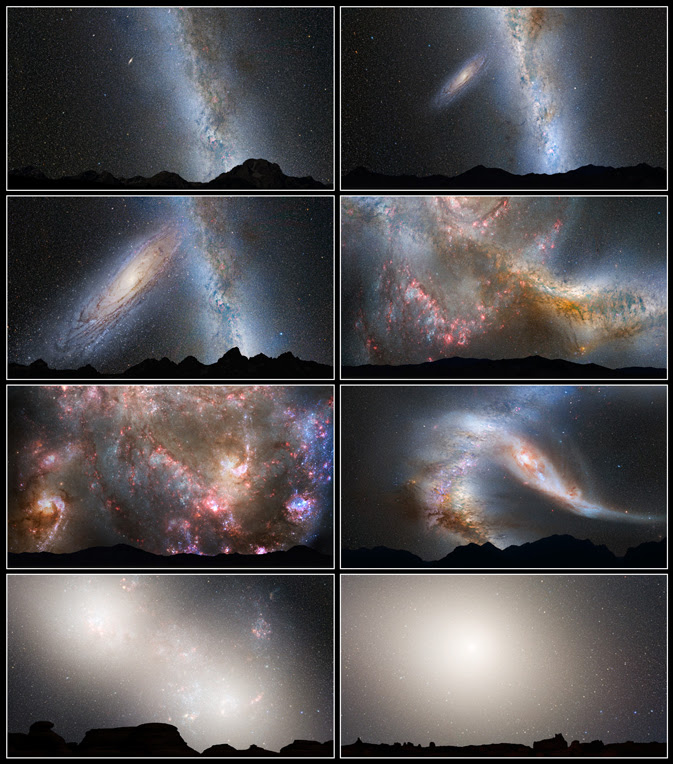 
The space shuttle servicing missions to Hubble upgraded it with ever more-powerful cameras, which have given astronomers a long-enough time baseline to make the critical measurements needed to nail down M31's motion. The Hubble observations and the consequences of the merger are reported in three papers that will appear in an upcoming issue of the Astrophysical Journal.


For more images, video and information about M31's collision with the Milky Way, visit: http://hubblesite.org/news/2012/20