Mathematicians Can Conjure Matter Waves Inside An Invisible Hat

Invisibility, once the subject of magic or legend, is slowly becoming reality. Over the past five years mathematicians and other scientists have been working on devices that enable invisibility cloaks – perhaps not yet concealing Harry Potter, but at least shielding small objects from detection by microwaves or sound waves.

A University of Washington mathematician is part of an international team working to understand invisibility and extend its possible applications. The group has now devised an amplifier that can boost light, sound or other waves while hiding them inside an invisible container.

This graphic shows a matter wave hitting a Schrodinger's hat. The wave inside the container is magnified. Outside, the waves wrap as if they had never encountered any obstacle. 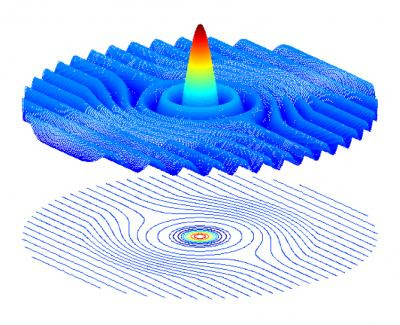 Credit: G. Uhlmann, U. of Washington

"You can isolate and magnify what you want to see, and make the rest invisible," said corresponding author Gunther Uhlmann, a UW mathematics professor. "You can amplify the waves tremendously. And although the wave has been magnified a lot, you still cannot see what is happening inside the container."

The findings were published this week in the Proceedings of the National Academy of Sciences.

As a first application, the researchers propose manipulating matter waves, which are the mathematical description of particles in quantum mechanics. The researchers envision building a quantum microscope that could capture quantum waves, the waves of the nanoworld. A quantum microscope could, for example, be used to monitor electronic processes on computer chips.

The authors dubbed their system "Schrödinger's hat," referring to the famed Schrödinger's cat in quantum mechanics. The name is also a nod to the ability to create something from what appears to be nothing.

"In some sense you are doing something magical, because it looks like a particle is being created. It's like pulling something out of your hat," Uhlmann said.

Matter waves inside the hat can also be shrunk, though Uhlmann notes that concealing very small objects "is not so interesting."

The team helped develop the original mathematics to formulate cloaks, which must be realized using a class of engineered materials, dubbed metamaterials, that bend waves so that it appears as if there was no object in their path. The international team in 2007 devised wormholes in which waves disappear in one place and pop up somewhere else.

For this paper, they teamed up with co-author Ulf Leonhardt, a physicist at the University of St. Andrews in Scotland and author on one of the first papers on invisibility.

Recent progress suggests that a Schrodinger's hat could, in fact, be built for some types of waves.

"From the experimental point of view, I think the most exciting thing is how easy it seems to be to build materials for acoustic cloaking," Uhlmann said. Wavelengths for microwave, sound and quantum matter waves are longer than light or electromagnetic waves, making it easier to build the materials to cloak objects from observation using these phenomena. "We hope that it's feasible, but in science you don't know until you do it," Uhlmann said. Now that the paper is published, they hope to find collaborators to build a prototype


Contacts and sources:
Hannah Hickey
University of Washington
on May 29, 2012