On June 15, high-wire artist Nik Wallenda will attempt to cross Niagara Falls on a tightrope -- the first such attempt in more than 100 years.

Charles Blodin especially owed his celebrity and fortune to his idea of crossing the gorge below Niagara Falls on a tightrope, 1100 feet (335 m) long, 3¼ inches in diameter, 160 feet (50 m) above the water. This he accomplished, first on 30 June 1859, a number of times, always with different theatric variations: blindfolded, in a sack, trundling a wheelbarrow, on stilts, carrying a man (his manager, Harry Colcord) on his back, sitting down midway while he cooked and ate an omelet and standing on a chair with only one chair leg on the rope. 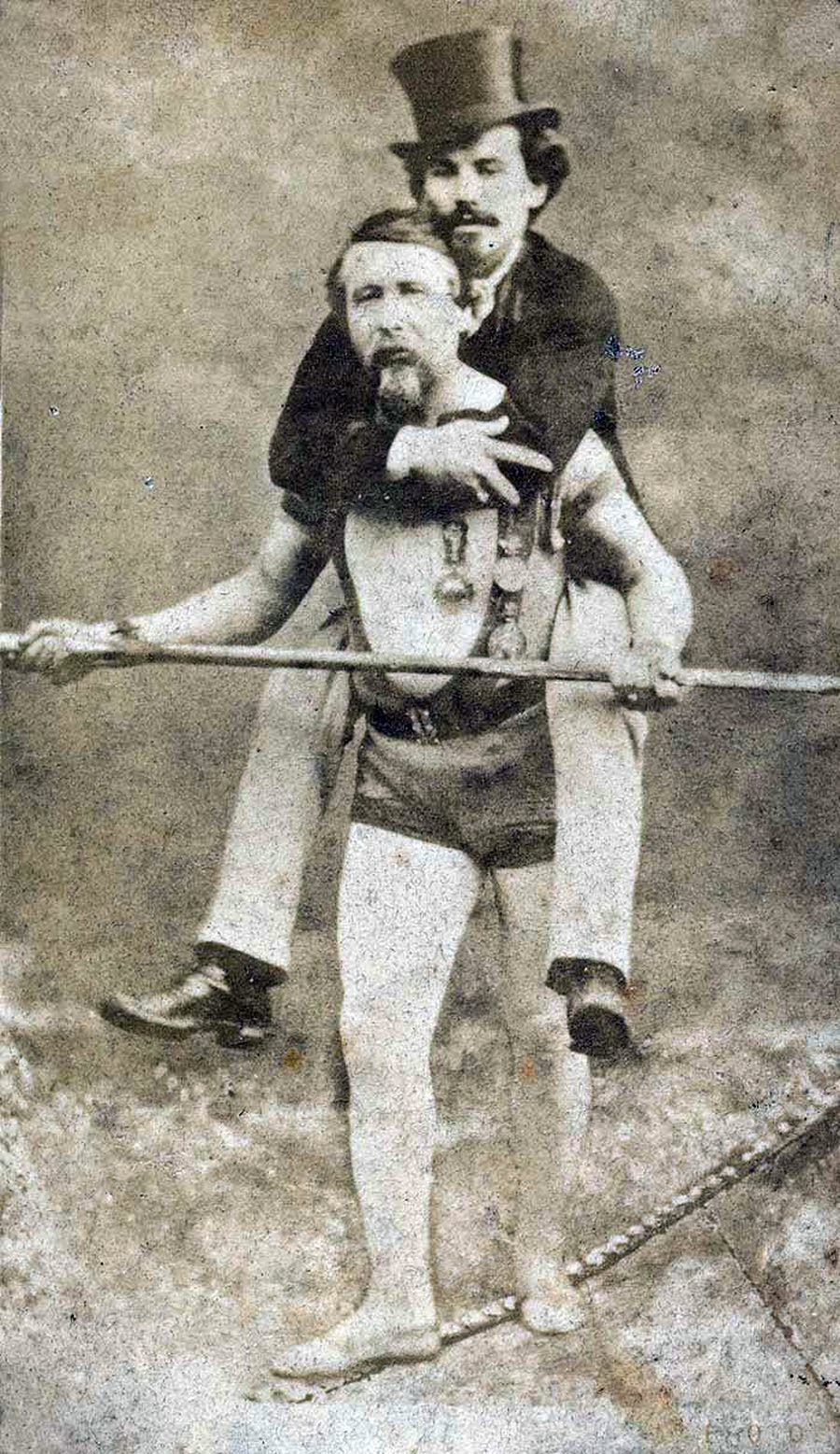 He will use an 1,800-foot long, custom-made, two-inch wire that will stretch from Goat Island on the American side of the falls to a site just below the falls on the Canadian side. The wire will be strung about 200 feet above the base of the Niagara Gorge.

The walk poses considerable danger to Wallenda from such things as the falls’ mist plume, changeable winds, possible attack by peregrine falcons as he traverses their flight path, and clamps on the safety harness he is being forced to wear by ABC, which is televising the event.

This event has generated much excitement and controversy, and University at Buffalo experts are available to discuss the nature of such spectacles, their role in popular culture, the Niagara mist plume, crowd psychology and the kinds of risks involved in this venture. 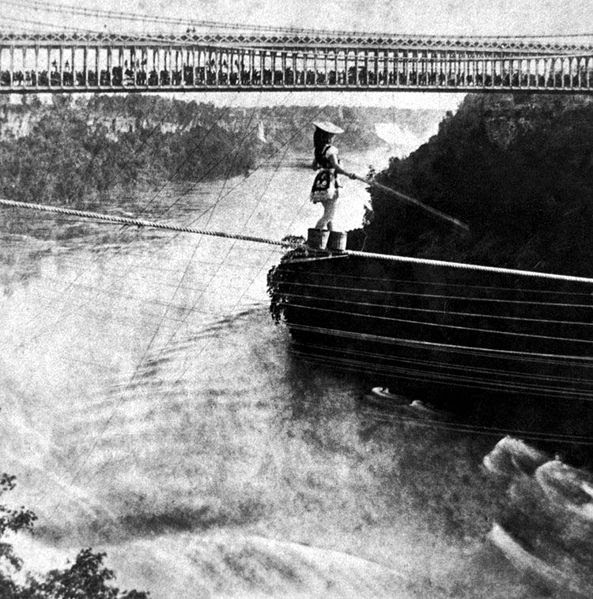 
The public loves a spectacle that involves possible violence

David Schmid, PhD, Associate Professor and Associate Chair of English, University at Buffalo College of Arts and Sciences says, "From the popularity of reality TV to our tendency to slow down to rubberneck at car accidents on the highway, our society loves a spectacle, particularly if it includes the possibility of violence. This is especially true for those who want to be famous or are attracted to celebrity. More than ever before, fame means to be visible, to do something that grabs public attention and keeps it.

"Because the tightrope walk by Nik Wallenda touches upon all these themes, public interest in it extends far beyond morbid curiosity. The Wallenda event also has that X-factor that sets it apart from so much on the contemporary media landscape: unpredictability.

"Despite the ubiquity and popularity of so-called 'reality TV,' the vast majority of it is so safe, scripted and managed that any element of risk or unpredictability has been entirely removed. This falls walk, on the other hand is real 'reality' television that presents a genuinely chancy, dangerous spectacle on live TV, a performance that could actually lead to the actor’s death. That fact makes us nervous. It also compels us to watch.

"Suzanne Collins, author of the best-selling 'Hunger Games' books, presents the premise in which, in a future United States, children kill each other as part of an immensely popular televised game. At first glance, that seems completely unbelievable. But consider the success of the books and the movie adaptation and the excitement the Wallenda walk is generating. Collins has struck a nerve."


Marcus Bursik, PhD, Professor of Geology, University at Buffalo College of Arts and Sciences, says "Wallenda will be walking over a portion of the Niagara Gorge directly below Niagara Falls on the Canadian side. The location is not the safest route he could have chosen. In fact, it is probably the worst place to cross. There is a plume of mist that rises from the pool of water in the Niagara Gorge just below the falls that produces a moist updraft. It will be a little like walking a tightrope in a mini-thunderstorm. If he is used to moist updrafts, of course, it may not be a problem for him.

"The wind will be a factor as well. The wind can be, and often is stronger than the up or downdrafts associated with the falls. From our measurements, we found that the wind is often blowing across the gorge, so he could get a head or tail wind, or even shear. The plume adds an extra vertical component to a wind that in most places is much weaker than the horizontal wind.

"Wallenda will have factored possible conditions into his consideration of the walk, of course. He must be used to dealing with different kinds of wind conditions. The plume will be relatively small at this time of year, possibly nonexistent, because air temperatures are warmer than the water. It presents a possible risk, however. Since his wire will be only 220 feet above the gorge basin, even a small plume could increase risk.


Wire walk is 'opportunity of a lifetime' for regional tourism

Arun Jain, Samuel P. Capen Professor of Marketing Research, University at Buffalo School of Management, says. "This is an opportunity of a lifetime. We will be window to the world to see this fete being performed at one of the Wonders of the World. Whether he succeeds (I hope he does) or fails, Niagara Falls will be etched in the minds of people across the globe.

"The challenge is to claim it as a Buffalo Niagara event and do things to put a glow on our fair city, attractions (history), and make us an inviting place to visit. Media will be looking for events and activities to show before, during and after the event. Either it will be filled with stories about us or Niagara Falls, Canada. My question is, are our local leaders savvy enough to take advantage of this opportunity handed to them on a silver platter?"
Public Appeal of Wallenda's Walk Has Psychological Underpinnings

Megan E. Pailler, PhD, Director of the Psychological Services Center, University at Buffalo College of Arts and Sciences, Department of Psychology, says, "Sensation seeking, vicarious thrills, danger and uncertainty -- because of our psychological makeup, Nik Wallenda's planned walk across Niagara Falls fascinates us on a variety of levels.

"In many ways, its appeal is similar to that of arousal-inducing action or horror media. As in those cases, the terms applied to the walk are 'dramatic,' 'thrilling' and 'exciting.' But why is this particular event so electrifying? I think for several reasons:

· Many people enjoy the physiological arousal they experience when watching dangerous, exciting and novel events, and the Wallenda walk offers danger, excitement and novelty.

· There is some evidence that people who rate higher on sensation seeking scales prefer arousing media. In general, men tend to rate higher in sensation seeking and may be more likely to enjoy watching a thrilling or dangerous event like the Wallenda walk. The walk also involves voyeurism, and we know how people enjoy watching other people's lives and activities (in fact, this accounts for some of the popularity of reality TV).

· The danger and uncertainty of the outcome intensifies the experience, and, if the walk is successful, there is also the vicarious sense of relief and accomplishment -- similar to the experience of watching your favorite team win a game.

· The Wallenda walk is outside the realm of day-to-day experience. It provides an appealing escape from the mundane. Many of us have detailed memories of watching significant and novel events like the moon landing. And as I said, the potential for danger may heighten this feeling.

· Finally, there is often a satisfying sense of shared experience that accompanies watching such things with others -- things that may collectively be recalled and recounted."

"The Canadian Peregrine Foundation has raised alarms over the possibility of attacks on Nik Wallenda by a pair of peregrine falcons nesting in a nearby decommissioned Ontario Power Generation plant. They say the birds could feel threatened by Wallenda, since his Niagara Falls walk will take him through their flight path.

"Peregrines are aggressively protective of their territory, particularly when they are caring for their young, and in this region, this is the time of year when they are doing just that. There are countless stories of peregrine falcons diving-bombing people.

"I do think that possible falcon attacks should be a serious consideration in terms of his safety. Peregrines reach speeds of 200 miles per hour during a hunting swoop, making them the fastest animal on the planet. Being hit by a bird moving at that speed would have quite an impact on a man trying to balance on a high wire."

"The first kind is enterprise risk. This is the risk that the whole 'adventure' won’t happen for reasons such as regulations, last minute concern from authorities, etc. I assume that there has been work dedicated to ensure that this event will happen, so the risk here is low.

"Second is specific risk. In this case, danger could be increased by weather, mechanical complications or health issues. I am no professional wire walker, but I assume that the training and accurate weather reports predict most of these risks and pose appropriate responses.

"Finally, there is uncertainty or unquantifiable risks. For example (and I hope not to jinx the guy), the walker cannot prepare for such things as a kid flashing a laser pointer, a helicopter flying too close or someone falling in the water, but they might increase his risk. In fact, however, these are poor examples. What I mean by uncertainty is something for which it is completely impossible to plan.

"The greater the difference in perception, the more interesting the show will be."