Dino-Chickens: Changes In Developmental Timing Were Crucial In Evolutionary Shift From Dinosaurs To Birds

Researchers from Harvard University, The University of Texas at Austin and elsewhere have found evidence that the evolution of birds is the result of a drastic change in how dinosaurs developed. Scientists have long understood that modern birds descended from dinosaurs. Rather than take years to reach sexual maturity, as many dinosaurs did, birds sped up the clock – some species take as little as 12 weeks to mature – allowing them to retain the physical characteristics of baby dinosaurs.

The results of the study appeared May 27 in an online edition of the journal Nature.

“What is interesting about this research is the way it illustrates evolution as a developmental phenomenon,” said Arkhat Abzhanov, associate professor at Harvard and study co-author. “By changing the developmental biology in early species, nature has produced the modern bird – an entirely new creature – and one that, with approximately 10,000 species, is today the most successful group of land vertebrates on the planet.” 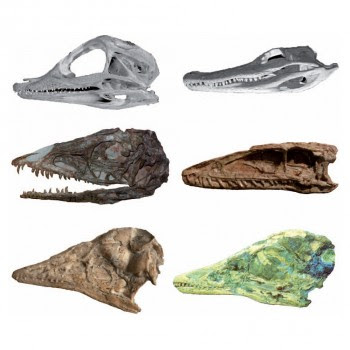 While it’s clear simply from looking at the skulls of dinosaurs and modern birds that the two creatures are vastly different – dinosaurs have distinctively long snouts and mouths bristling with teeth, while birds have proportionally larger eyes and brains – it was the realization that skulls of modern birds and juvenile dinosaurs show a surprising degree of similarity that sparked the study.

“No one had told the big story of the evolution of the bird head before,” said Bhart-Anjan Bhullar, a Harvard PhD student and first author of the study. “There had been a number of smaller studies that focused on particular points of the anatomy, but no one had looked at the entire picture. What’s interesting is that when you do that, you see the origins of the features that make the bird head special lie deep in the history of the evolution of Archosaurs, a group of animals that were the dominant, meat-eating animals for millions of years.”

To tackle the problem, the researchers turned to an unusual methodology. Using CT scanners at Harvard and The University of Texas at Austin, they scanned dozens of skulls, ranging from modern birds to theropods – the dinosaurs most closely related to birds – to early dinosaur species. By marking various “landmarks” – such as the orbits, cranial cavity and other bones in the skull – on each scan, researchers were able to track how the skull changed shape over millions of years.

Tim Rowe is a director of The University of Texas High-Resolution X-Ray Scanning Facility, where some of the scans were performed, and study co-author.

Artist's illustration of a chicken and a baby dinosaur with a skull comparison.

“We examined skulls from the entire lineage that gave rise to modern birds,” Abzhanov said. “We looked back approximately 250 million years, to the Archosaurs, the group which gave rise to crocodiles and alligators as well as modern birds. Our goal was to look at these skulls to see how they changed, and try to understand what actually happened during the evolution of the bird skull.”

What the researchers found was surprising – while early dinosaurs, even those closely related to modern birds, undergo vast morphological changes as they mature, the skulls of juvenile and adult birds remain remarkably similar.

In the case of modern birds, Abzhanov said, the change is the result of a process known as progenesis, which causes an animal to reach sexual maturity earlier. Unlike their dinosaurian ancestors, modern birds take dramatically less time – just 12 weeks in some species – to reach maturity, allowing birds to retain the characteristics of their juvenile ancestors into adulthood.

Ultimately, Abzhanov said, the way the bird skull evolved – through changes in the developmental timeline – highlights the diversity of evolutionary strategies that have been used over millions of years.

“That you can have such dramatic success simply by changing the relative timing of events in a creature’s development is remarkable,” he said. “We now understand the relationship between birds and dinosaurs that much better, and we can say that, when we look at birds, we are actually looking at juvenile dinosaurs.”

“It shows that there’s so much for evolution to act upon,” Bhullar agreed. “When we think of an organism, especially a complex organism, we often think of it as a static entity, but to really study something you have to look at its whole existence, and understand that one portion of its life can be parceled out and made into the entire lifespan of a new, and in this case, radically successful organism.”

Other institutions participating in the study include Universidad Autonoma de Madrid, Spain; New York College of Osteopathic Medicine of the New York Institute of Technology; and the American Museum of Natural History.

Contacts and sources:
University of Texas