Enormous volcanic eruptions with potential to end civilizations may have surprisingly short fuses, researchers have discovered.

These eruptions are known as super-eruptions because they are more than 100 times the size of ordinary volcanic eruptions like Mount St. Helens. They spew out tremendous flows of super-heated gas, ash and rock capable of blanketing entire continents and inject enough particulate into the stratosphere to throw the global climate into decade-long volcanic winters. In fact, there is evidence that one super-eruption, which took place in Indonesia 74,000 years ago, may have come remarkably close to wiping out the entire human species.

This three-dimensional perspective view of Long Valley, California was created from data taken by the Spaceborne Imaging Radar-C/X-band Synthetic Aperture Radar on board the space shuttle Endeavour. 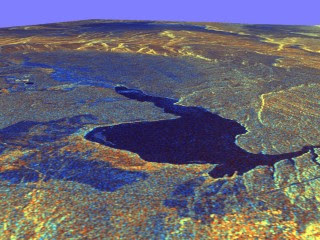 Geologists generally believe that a super-eruption is produced by a giant pool of magma that forms a couple of miles below the surface and then simmers for 100,000 to 200,000 years before erupting. But a new study suggests that once they form, these giant magma bodies may only exist for a few thousand years, perhaps only a few hundred years, before erupting. 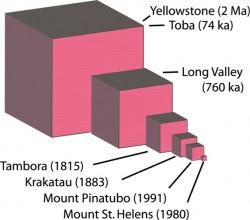 “Our study suggests that when these exceptionally large magma pools form they are ephemeral and cannot exist very long without erupting,” said Guilherme Gualda, the assistant professor of earth and environmental sciences at Vanderbilt University who directed the study, which appears in the May 30 issue of the journal Public Library of Science ONE.

The study was performed on the remnants of the Bishop Tuff, the Long Valley super-eruption that occurred in east-central California 760,000 years ago. Using the latest methods for dating the process of magma formation, Gualda and his colleagues found several independent lines of evidence that indicate the magma pool formed within a few thousand years, perhaps within a few hundred years, before it erupted, covering half of the North American continent with smoldering ash.

These giant magma pools tend to be shaped like pancakes and are 10 to 25 miles in diameter and one half to three miles deep. In the beginning, the molten rock in these pools is largely free from crystals and bubbles. After they form, however, crystals and bubbles form gradually and progressively change the magma’s physical and chemical properties, a process that halts when an eruption takes place. As far as geologists can tell, no such giant crystal-poor magma body currently exists that is capable of producing a super-eruption. The research team believes this may be because these magma bodies exist for a relatively short time rather than persisting for hundreds of thousands of years as previously thought. 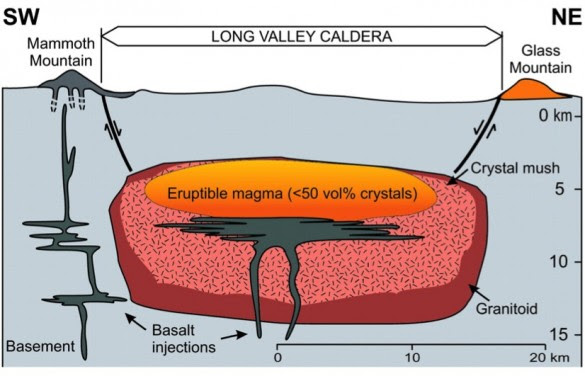 According to Gualda, the estimates for the 100,000 year-plus lifetimes of these giant magma bodies appears to be an artifact of the method that geologists have used to make them. The measurements have been made using zircon crystals. Zircons are commonplace in volcanic rocks and they contain small amounts of radioactive uranium and thorium, which decay into lead at a set rate, allowing scientists to accurately determine when the crystals formed. They are extremely useful for many purposes because they can survive most geologic processes. However, the fact that zircons can withstand the heat and the forces found in a magma chamber means that they are not good at recording the lifetimes of crystal-poor magma bodies.

Gualda and his colleagues took a different approach in his studies of the Bishop Tuff. They determined crystallization rates of quartz – the most abundant mineral in the deposits – to gather information about the lifespan of these giant magma bodies. They developed four independent lines of evidence that agreed that the formation process took less than 10,000 years and most likely between 500 to 3,000 years before the eruption. They suggest that the zircon crystal measurements record the extensive changes that take place in the crust required before the giant magma bodies can begin forming as opposed to the formation itself.

X-ray tomography of small pieces of pumice yield a 3D model of the crystal and vesicle (bubble casts) size and distribution. These models can be used to determine the lifespan of the giant magma body that erupted to form the Bishop Tuff. Color legend: yellow = large vesicles; green = quartz; red = feldspar; blue = magnetite. 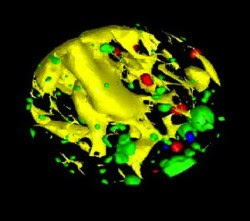 “The fact that the process of magma body formation occurs in historical time, instead of geological time, completely changes the nature of the problem,” said Gualda. Instead of concluding that there is virtually no risk of another super-eruption for the foreseeable future because there are no suitable magma bodies, geologists need to regularly monitor areas where super-eruptions are likely, such as Yellowstone, to provide advanced warning if such a magma body begins to form.

According to a 2005 report by the Geological Society of London, “Even science fiction cannot produce a credible mechanism for averting a super-eruption. We can, however, work to better understand the mechanisms involved in super-eruptions, with the goal of being able to predict them ahead of time and provide a warning for society. Preparedness is the key to mitigation of the disastrous effects of a super-eruption.”

Vanderbilt doctoral student Ayla S. Pamukcu, Mark S. Ghiorso of OFM Research, and Alfred T. Anderson Jr.,Stephen R. Sutton and Mark L. Rivers from the University of Chicago participated in the study, which was supported by grants from the National Science Foundation.

Contacts and sources:
David Salisbury Vanderbilt University
on May 31, 2012