A study of the evolution of bird skulls from their primitive reptilian ancestors reveals that the skulls of adult birds are very similar to those of young dinosaurs. Retention of juvenile features in the adult may have had an important role in the evolution of bird skulls, according to the report in Nature this week. Birds represent one of the most successful animal groups in terms of species number and diversity, and much of this success is attributed to their unique skulls.

Confuciusornis is a genus of primitive crow-sized birds from the Early Cretaceous Yixian and Jiufotang Formations of China, dating from 125 to 120 million years ago. Like modern birds, Confuciusornis had a toothless beak, but close relatives of modern birds such as Hesperornis and Ichthyornis were toothed, indicating that the loss of teeth occurred convergently in Confuciusornis and living birds. It is the oldest known bird to have a beak. It was named after the Chinese moral philosopher Confucius (551–479 BC). Confuciusornis is one of the most abundant vertebrates found in the Yixian Formation, and several hundred complete, articulated specimens have been found.
Confuchisornis sanctus fossil 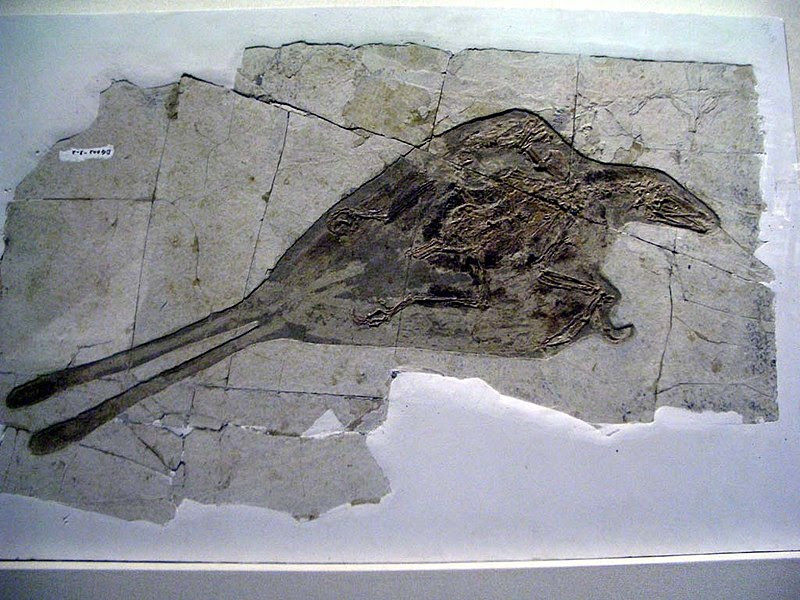 To understand how the anatomy of birds evolved from that of dinosaurs, Bhart-Anjan Bhullar and colleagues analysed a large sample of bird and dinosaur skulls. They observe a shift in development in birds, and report similarities between the skulls of adult bids and those of dinosaur embryos and juveniles. The authors suggest that this phenomenon (called paedomorphosis), which occurred in four distinct episodes, may account for many features of birds, such as their relatively large brains and eyes. Conversely, an opposite process known as peramorphosis (development of adult features) is implicated in the development and evolution of the beak.