We always tend to tout children as our future, but what kind of future will kids wind up with if no opportunities to support themselves (andtheir children) arise? Youth between the ages of 15 and 24 stand as the most vulnerable demographic when it comes to unemployment, with some nations suffering from a significant chunk of the population unable to launch their careers. For generations raised on being told education’s myriad forms means economic success, the reality of their forefather’s fiscal mistakes precluding jobs obviously disillusions them; not to mention the resulting “brain drain” which sees the highly motivated, highly skilled youth fleeing overseas and taking up lifetime careers instead. What this means for a country’s social, political, and (of course) economic climate should be quite obvious. 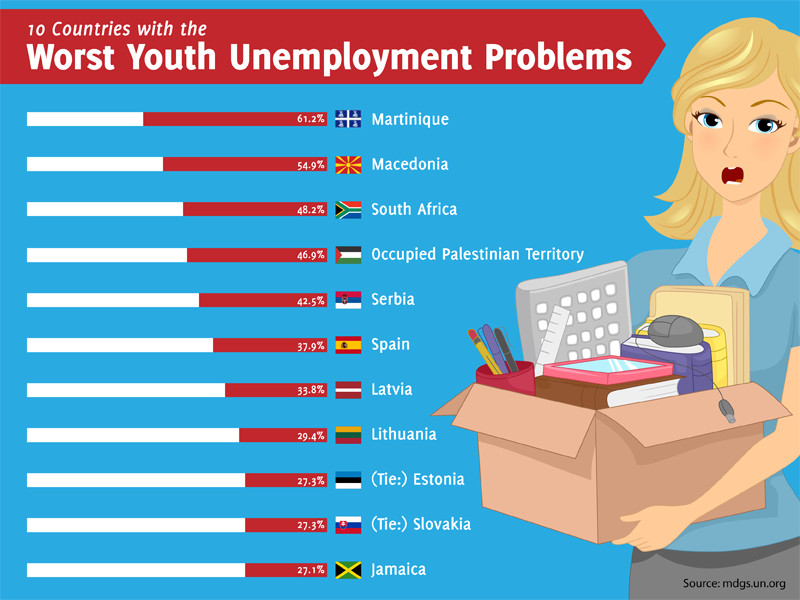 Rankings have been gleaned from the United Nation’s Millennium Development Goals Indicators statistics. Because the last findings were released in 2009, there are some fluctuations in current numbers; some nations may have even fallen off or piled on since the organization launched any investigations. We went with the UN for the sake of both accuracy as well as consistency in comparisons and contrasts.

As of 2009, the UN places Martinique’s youth unemployment rate at 61.2%, compared to8% of the total population. The issue is, sadly, nothing new to the French-occupied Caribbean island, which — along with neighboring island Guadeloupe — exploded in demonstrations, protests, and union strikes lashing out against the lack of jobs back in 2009. Behind the unrest, however, lays an extended history of colonialism-induced racism and classism, where white French settlers, who make up 1% of the population, control 99% of the resources.

he UN’s most recent data places this Balkan’s youth unemployment at 54.9%, and the International Labor Organization’s reported it as 53.7% a year later. According to the latter, these statistics place young folks facing the serious issue at nearly double the rate of their adult peers (32.2%), and only 4% of the employed currently work in positions relevant to their chosen careers. Macedonia responded by launching the National Action Plan on Youth Unemployment to try and reverse the egregious crisis by 2015.

Less than 17% of South Africa’s adults grapple with unemployment, but its youth have faced a rate hovering around the 40% range (48.2% in 2009) since at least 1998, though it spiked to 56.5% in 2002 and 2003, according to the UN. By 2011, the nation self-reported the youth unemployment number as one in eight, or roughly 42%. In February of that year, South Africa’s National Treasury drew up the New Growth Path to explicitly address the issue via public and private initiatives alike.

he Occupied Palestinian Territory was experiencing 46.9% of its young people out of work as of 2009. Considering 19.3% of the total population is aged between 15 and 24, this means a significant chunk of the work force drawing from the economy instead of stimulating it. Studies by the Euromed Youth Technical Assistance Unit — with backing by the European Union— cite educational opportunities that do not nurture IT and other necessary digital age skills and few available positions openly accepting youth as the main sources.

By 2010, the UN saw its research painting 42.5% of Serbia’s youth as unemployed shoot up to an estimated 46.4%. Four of the global organization’s agencies partnered with the government in order to chip away at the devastating numbers in an initiative known as the Joint Programme. Together, this initiative develops sustainable solutions to slowly incorporate young workers into the formal economy, mainly focusing on ensuring equal opportunities for the underprivileged by 2020.

While the UN’s last official numbers from 2009 saw the Spanish youth unemployment rate as 37.9%, estimates from 2011 and 2012 universally paint it between 40% and the high 50% range. And with overall unemployment at a solid 23% right now — making the country the hardest hit in the European Union — the outlook stands as exceedingly disconcerting. Spain’s future so desperately needs work, it has started turning toward opportunities abroad, meaning it might very well suffer from a particularly damaging “brain drain” in the near future.

Between 2008 and 2009, this Baltic nation saw its youth unemployment percentage swell from 13.1% to a staggering 33.8%, according to UN data. Latvia’s government believes a vulnerable economy and high deficit are responsible for the traumatic jump, and the Ministry of Finance, Ministry of Economics, and Bank of Latvia began developing multiple strategies addressing multiple scenarios in 2010. Some of its active labor market policy measures involve more funding for education and job training, the establishment of more volunteer organizations and workshops, and a more solid minimum wage.

UN statistics posited Lithuania’s youth unemployment as 29.4% in 2009, and in the years since some argue it might be one out of every three. The European Commission believes the Baltic state needs to start sponsoring programs nurturing job creation and training alike so the upcoming generations don’t fall behind. Millions of euros are now earmarked for skill upgrades (which it thinks will encourage “social inclusion”) — which stands as the highest priority — and public policies fostering education and innovation, particularly in the scientific and technological realms.

Both Estonia and Slovakia wound up tying for the UN’s ninth worst youth unemployment levels, at 27.3% in 2009. The former nearly doubled during the past few years, however, and the Estonian National Youth Council’s Martti Martinson fears that, should the trend continue, citizens between the ages of 15 and 24 might very well wind up as a “lost generation” if their plight continues un- or underaddressed. Meanwhile, in Slovakia, the Europe 2020 initiative addresses both youth and adult unemployment. It seeks to establish a “labor intermarket” blending social services and financial support with part-time employment, stimulating the economy while making sure its young people can provide for themselves.

The United Nations’ youth unemployment findings for Jamaica saw it hovering around 27.1% in 2009, which also happens to be the year in which the Caribbean nation benefited from its Development Programme. A $1.25 million contribution from the United States Agency for International Development specifically targeted urban and rural youth with the goal of reducing poverty while simultaneously increasing job opportunities. Literacy and other basic academic skills — along with those fostering technological acumen — form the crux of the initiative’s sponsorship.
Contacts and sources:
Jasmine Hall
http://www.onlinecolleges.net/2012/05/28/10-countries-with-the-worst-youth-unemployment-problems/
on May 30, 2012