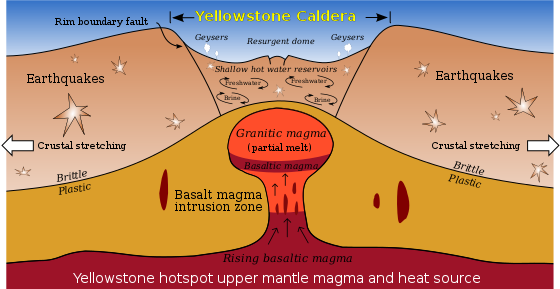 Their results paint a new picture of a more active volcano than previously thought and can help recalibrate the likelihood of another big eruption in the future. Before the researchers split the one eruption into two, it was the fourth largest known to science.

"The Yellowstone volcano's previous behavior is the best guide of what it will do in the future," says Ben Ellis, co-author and post-doctoral researcher at Washington State University's School of the Environment. "This research suggests explosive volcanism from Yellowstone is more frequent than previously thought."

The new ages for each Huckleberry Ridge eruption reduce the volume of the first event to 2,200 cubic kilometers, roughly 12 percent less than previously thought. A second eruption of 290 cubic kilometers took place more than 6,000 years later.

That first eruption still deserves to be called "super," as it is one of the largest known to have occurred on Earth and darkened the skies with ash from southern California to the Mississippi River. By comparison, the 1980 eruption of Mount St. Helens produced 1 cubic kilometer of ash. The larger blast of Oregon's Mount Mazama 6,850 years ago produced 116 cubic kilometers of ash.

The study, funded by the National Science Foundation and published in the June issue of the Quaternary Geochronology, used high-precision argon isotope dating to make the new calculations. The radioactive decay rate from potassium 40 to argon 40 serves as a "rock clock" for dating samples and has a precision of .2 percent. Darren Mark, co-author and a post-doctoral research fellow at the SUERC, recently helped fine tune the technique and improve it by 1.2 percent—a small-sounding difference that can become huge across geologic time.

"Improved precision for greater temporal resolution is not just about adding another decimal place to a number, says Mark. "It's far more exciting. It's like getting a sharper lens on a camera. It allows us to see the world more clearly."

The project asks the question: Might super-eruptions actually be products of multiple, closely spaced eruptions through time? With improved temporal resolution, in times to come, maybe super-eruptions will be not quite so super.