Scientists at The Scripps Research Institute have unraveled a complex chemical pathway that enables bacteria to form clusters called biofilms. Such improved understanding might eventually aid the development of new treatments targeting biofilms, which are involved in a wide variety of human infections and help bacteria resist antibiotics.

The report, published online ahead of print on April 26, 2012, by the journal Molecular Cell, explains how nitric oxide, a signaling molecule involved in the immune system, leads to biofilm formation.

"It is estimated that about 80 percent of human pathogens form biofilms during some part of their life cycle," said Scripps Research president and CEO Michael Marletta, PhD, who led the work. "In this study, we have detailed for the first time the signaling pathway from nitric oxide to the sensor through cellular regulators and on to the biological output, biofilm formation."

Michael Marletta, Ph.D., is president and CEO of the Scripps Research Institute. 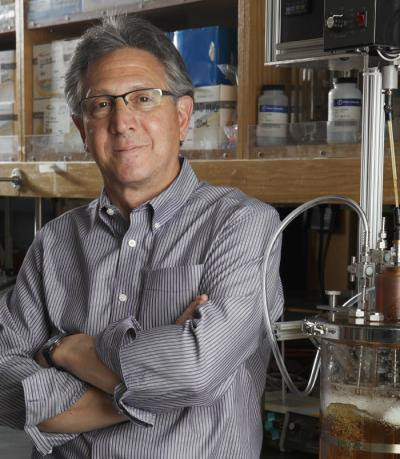 "There's a lot of interest right now in finding ways to influence biofilm formation in bacteria," said lead author Lars Plate, a graduate student in Marletta's team, which recently moved to Scripps Research from the University of California, Berkeley. "Figuring out the signaling pathway is a prerequisite for that."

Biofilm formation is a critical phenomenon that occurs when bacterial cells adhere to each other and to surfaces, at times as part of their growth stage and at other times to gird against attack. In such aggregations, cells on the outside of a biofilm might still be susceptible to natural or pharmaceutical antibiotics, but the interior cells are relatively protected. This can make them difficult to kill using conventional treatments.

Biofilms can form on surgical instruments such as heart valves or catheters, leading to potentially deadly infections. Likewise, difficult-to-eliminate biofilms also play key roles in a host of conditions from gum disease to cholera, and from cystic fibrosis to Legionnaires' disease.

For years, the Marletta lab and other groups have been studying how nitric oxide regulates everything from blood vessel dilation to nerve signals in humans and other vertebrates. Past research had also revealed that nitric oxide is involved in influencing bacterial biofilm formation.

Nitric oxide in sufficient quantity is toxic to bacteria, so it's logical that nitric oxide would trigger bacteria to enter the safety huddle of a biofilm. But nobody knew precisely how.

In the new study, the scientists set out to find what happens after the nitric oxide trigger is pulled. "The whole project was really a detective story in a way," said Plate.

Lars Plate is a graduate student in Michael Marletta's laboratory at the Scripps Research Institute. 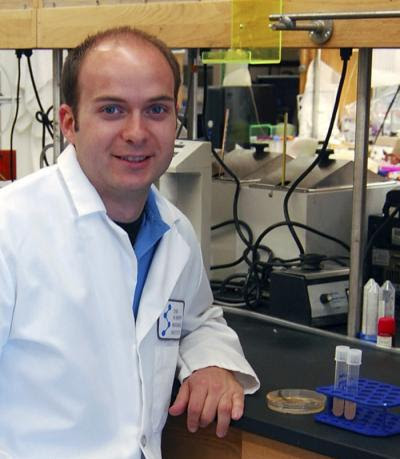 In vertebrates, nitric oxide can bind to something called the Heme-Nitric Oxide/Oxygen (H-NOX) binding domain on a specific enzyme, activating that enzyme and beginning the chemical cascades that lead to physiological functions such as blood vessel dilation.

Many bacteria also have H-NOX domains, including key pathogens, so this seemed the best starting point for the investigation. From there, the team turned to genomic data.

Genes for proteins that interact are often found adjacent to one another. Based on this fact, the researchers were able to infer a connection between the bacterial H-NOX domain and an enzyme called histidine kinase, which transfers phosphate chemical groups to other molecules in signaling pathways. The question was where the phosphates were going.

To learn more, the researchers used a technique called phosphotransfer profiling. This involved activating the histidine kinase and then allowing them to react separately with about 20 potential targets. Those targets that the histidine kinase rapidly transferred phosphates to had to be part of the signaling pathway. "It's a neat method that we used to get an answer that was in fact very surprising," said Plate.

The experiments revealed that the histidine kinase phosphorylated three proteins called response regulators that work together to control biofilm formation for the project's primary study species, the bacterium Shewanella oneidensis, which is found in lake sediments.

Further work showed that each regulator plays a complementary role, making for an unusually complex system. One regulator activates gene expression, another controls the activity of an enzyme producing cyclic diguanosine monophosphate, an important bacterial messenger molecule that is critical in biofilm formation, and the third tunes the degree of activity of the second.

Since other bacterial species use the same chemical pathway uncovered in this study, the findings pave the way to further explore the potential for pharmaceutical application. As one example, researchers might be able to block biofilm formation with chemicals that interrupt the activity of one of the components of this nitric oxide cascade.

Marletta's group has already explored nitric oxide's role in controlling Legionnaires' disease and, among other goals, will focus now on understanding biofilm formation in the bacterium that causes cholera.

The work for the paper, "Nitric oxide modulates bacterial biofilm formation through a multi-component cyclic-di-GMP signaling network," was supported by the National Institutes of Health and a Chang-Lin Tien Graduate Fellowship in the Environmental Sciences.