The Pit-Chains Of Mars – A Possible Place For Life?

The latest images released from ESA’s Mars Express reveal a series of ‘pit-chains’ on the flanks of one of the largest volcanoes in the Solar System. Depending on their origin, they might be tempting targets in the search for microbial life on the Red Planet.

Tractus Catena is shown here in a computer generated perspective view. The image was created using data obtained from the High-Resolution Stereo Camera (HRSC) on ESA’s Mars Express spacecraft. The pits seen in the background show hints of layered bedrock in the upper walls of each depression. 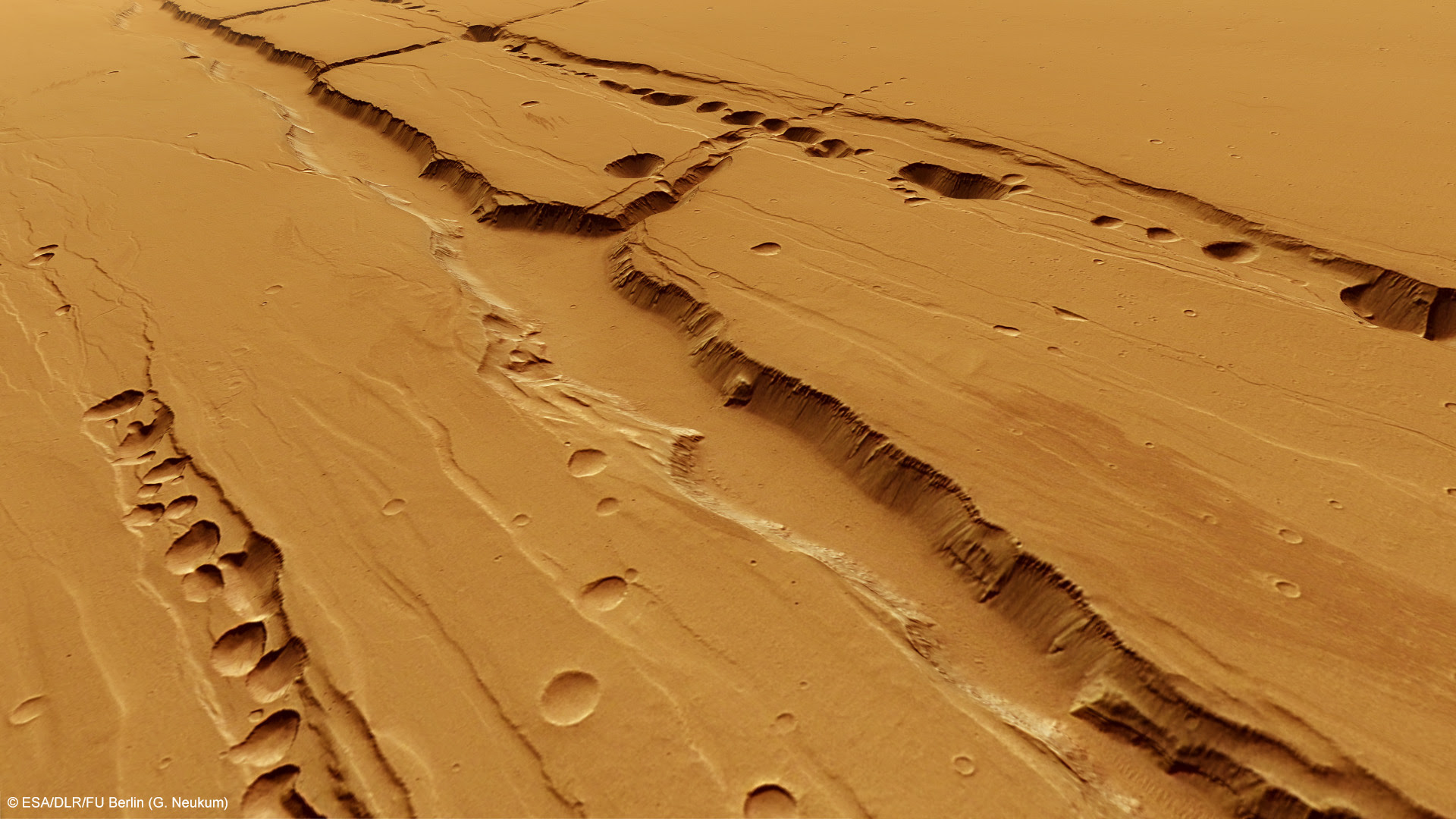 The images, taken on 22 June 2011, cover Tractus Catena in the Arcadia quadrangle, part of the vast Tharsis region on Mars. This region boasts a number of huge volcanoes, including the three collectively known as Tharsis Montes. To their north sits Alba Mons, also known as Alba Patera, one of the largest volcanoes in the Solar System by area and volume.

Tractus Catena sits on its southeastern flank of Alba Mons and the pit-chains in that region are a series of circular depressions that formed along fracture points in the martian crust.

Pit-chains can have a volcanic origin. Lava streaming from a volcano solidifies on the surface, leaving a molten tube of lava running below.

A wider contextual image of the Tractus Catena region showing the surrounding fossae and the large shield volcano Ascraeus Mons, discovered by Mariner 9 in 1971. Once volcanic activity ceases, the tube empties, leaving behind a subterranean cavity. Over time, parts of the roof over the cavity may collapse, leaving circular depressions on the surface. On Earth, recent examples can be seen on the flanks of Kilauea volcano in Hawaii, while on the Moon, Hadley Rille, visited by Apollo 15 in 1971, is believed to have formed in the same way billions of years ago.

Tractus Catena in monochrome from the nadir channel on the HRSC camera on Mars Express. The resolution in this image is 20 m/pixel. 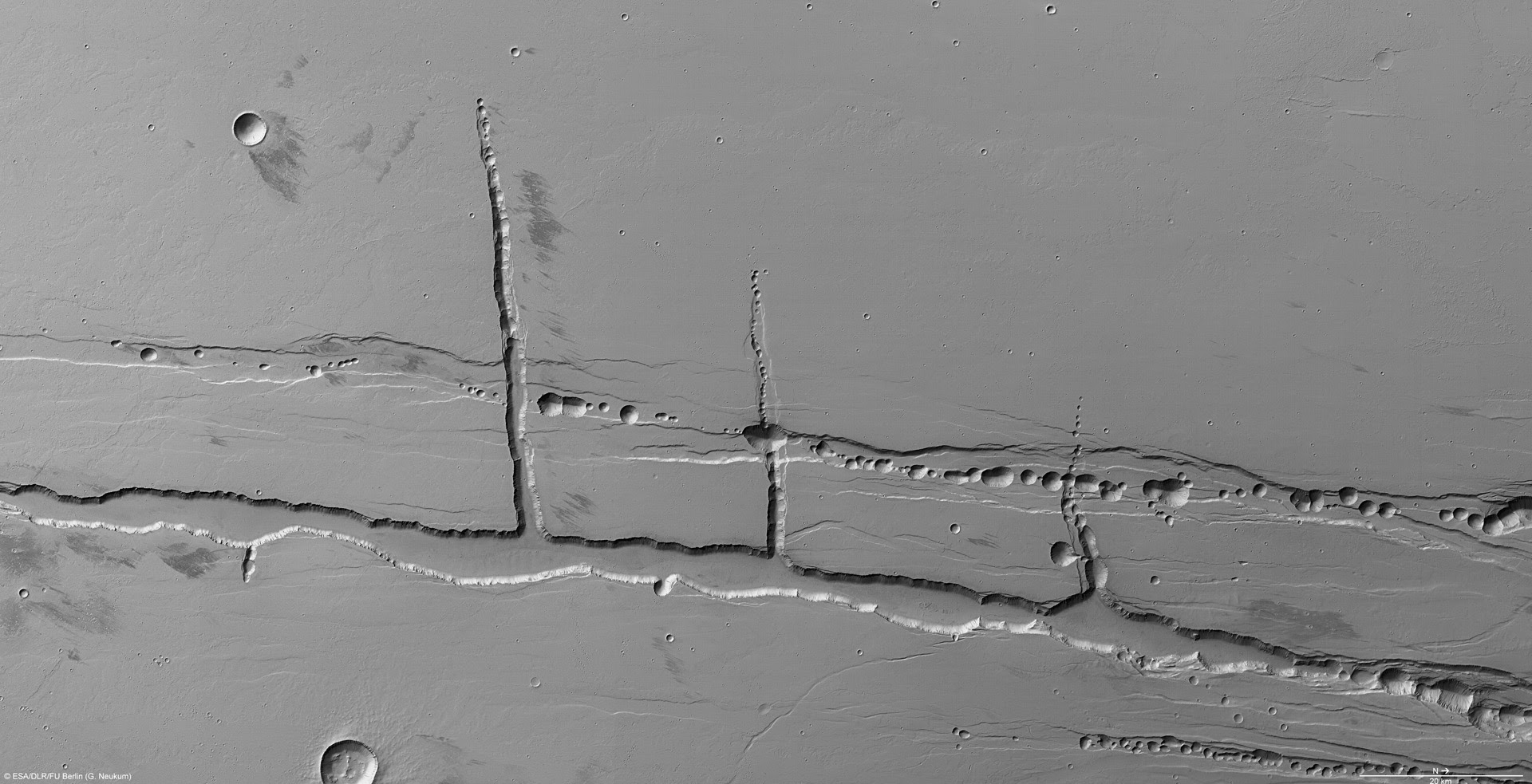 Credits: ESA/DLR/FU Berlin (G. Neukum)
Pit-chains can also be caused by strains in the Martian crust, which translates into a series of parallel elongated depressions known as grabens, in which pits can also form.

But the most dramatic scenario involves groundwater. On Earth, there are clear examples of similar structures in ‘Karst’ regions – after the German name for a region extending from Slovenia to Italy, where this phenomenon was first studied.

Some of Earth’s most famous examples are the network of ‘cenotes’ on the Yucatan peninsula of Mexico. These deep natural pits form when the surface limestone rocks collapse, exposing the groundwater underneath.

This origin is the most interesting in the context of the search for microbial life on Mars. If there are any cave-like structures associated with the pits, microorganisms could have survived, protected from the harsh surface environment.

Tractus Catena in a colour-coded plan view based on a digital terrain model of the region, from which the topography of the landscape can be derived. Mars landers have measured surface radiation around 250 times higher than that found on the Earth, and more than double that experienced by astronauts on board the International Space Station. Any caves associated with the pit-chains may in future provide a possible refuge for astronauts from the harsh surface radiation.

However they formed, these pit-chains show again just how similar many of the geological processes on Mars are to those on the Earth, and provide interesting targets for future missions.

Tractus Catena from the nadir and colour channels, combined to form a natural colour view of the region. The pit-chains have analogues on both Earth and the Moon, with the Mexican Cenotes being one of the most famous and dramatic examples on Earth. On the Moon, Hadley Rille, visited by Apollo 15 in 1971, is believed to have formed from the collapse of a lava tube billions of years ago. 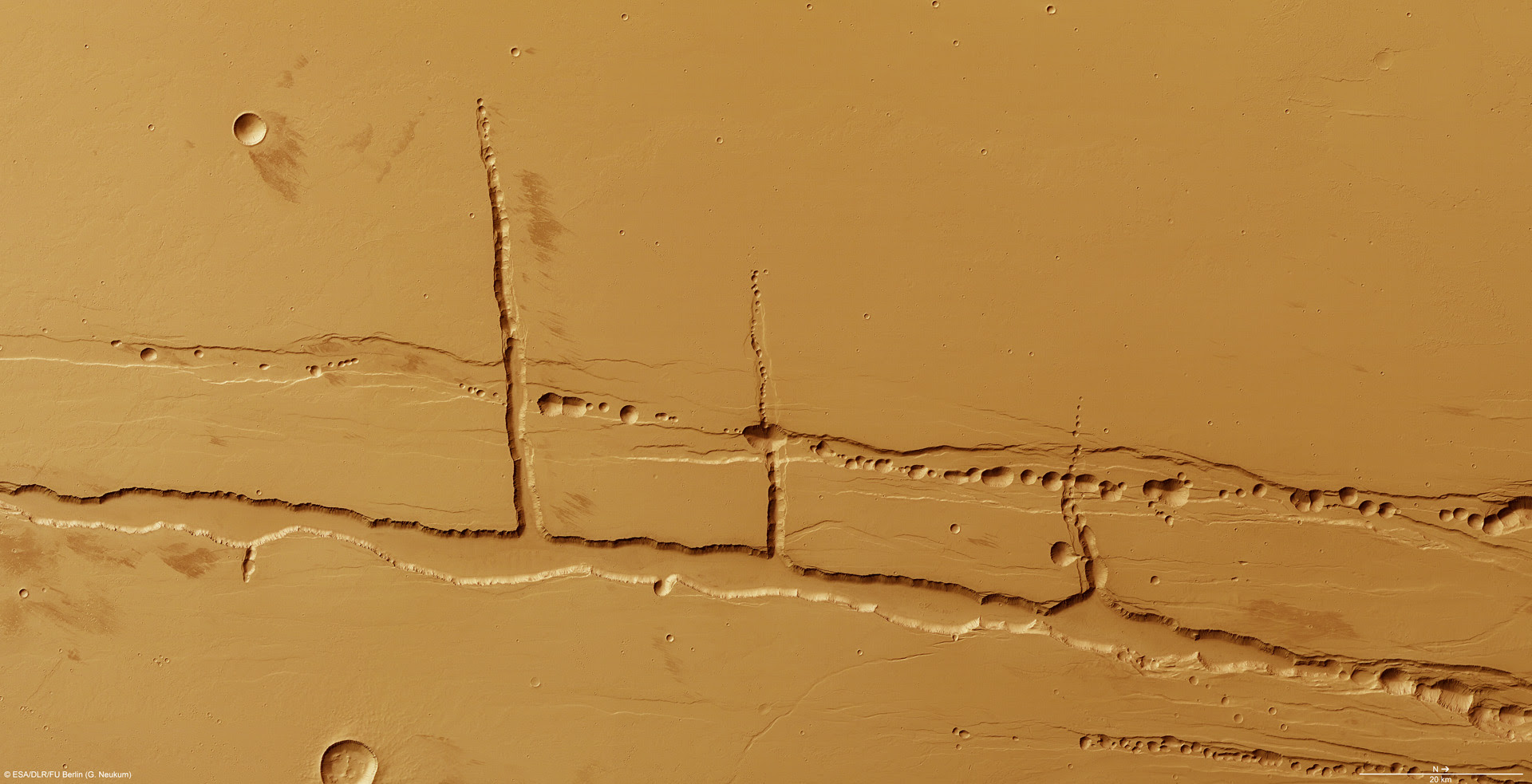 Tractus Catena was imaged during orbit 9538 of Mars Express by the HRSC camera. Centred at around 23°N and 103°W, this 3D image has a ground resolution of about 22 m per pixel. It combines data from HRSC’s nadir channel and one stereo channel to produce this 3D image. Stereoscopic glasses, using red-green or red-blue filters are required to see the 3D effect. 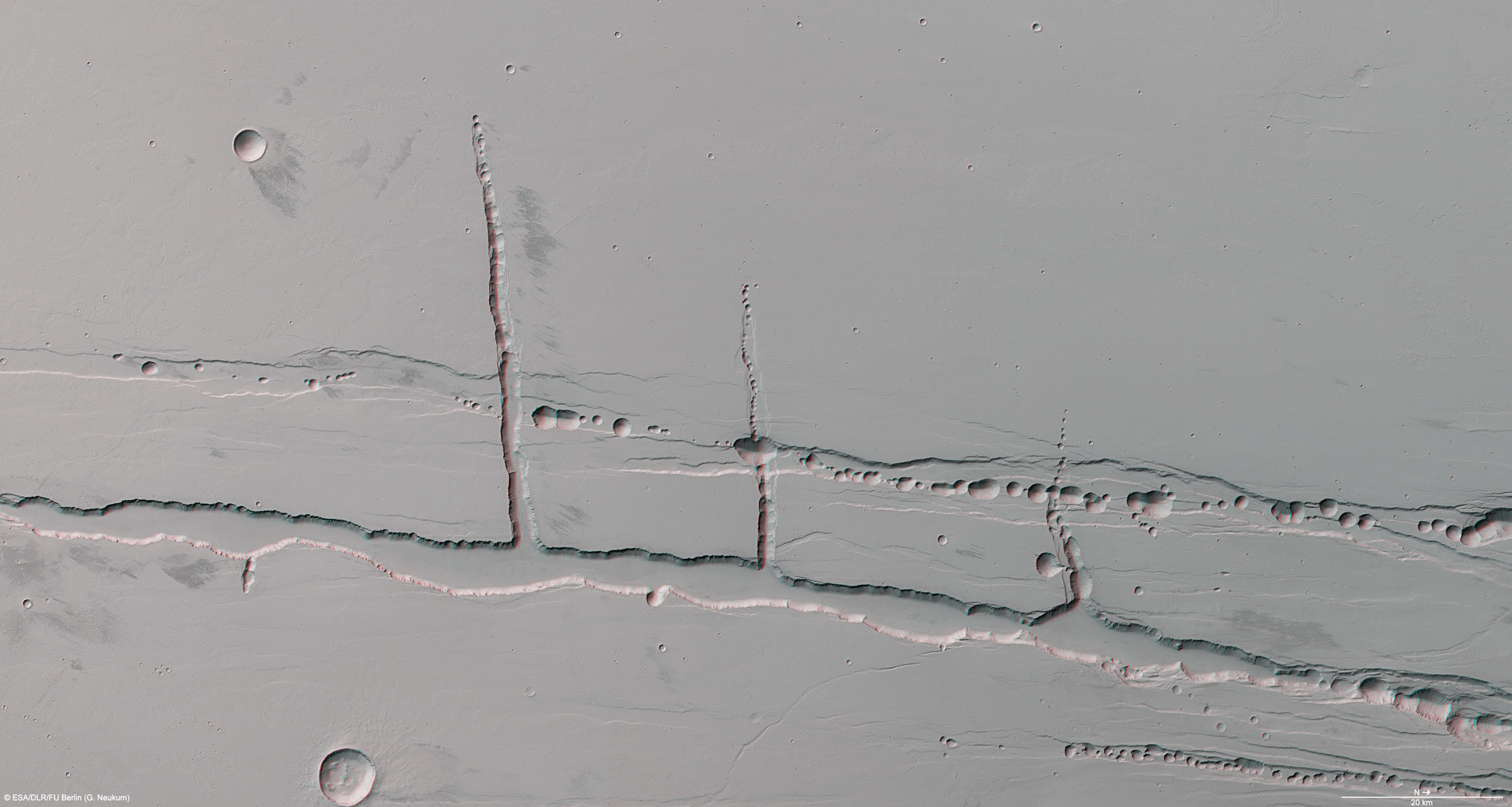