Perched atop the sheer coastal cliffs of Ireland's Aran Islands, ridges of giant boulders have puzzled geologists for years. What forces could have torn these rocks from the cliff edges high above sea level and deposited them far inland?

This is the boulder ridge around the coastline of the Aran Islands. New research finds that storm waves have formed these ridges, despite the contention of some researchers that only a tsunami would have enough power to do this. 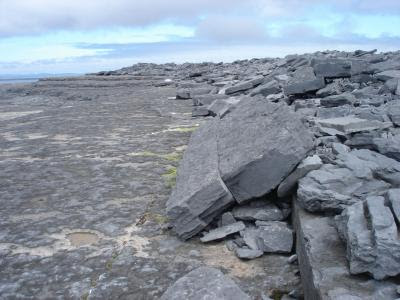 While some researchers contend that only a tsunami could push these stones, new research in The Journal of Geology finds that plain old ocean waves, with the help of some strong storms, did the job.

And they're still doing it.

The three tiny Aran Islands are just off the western coast of Ireland. The elongated rock ridges form a collar along extended stretches of the islands' Atlantic coasts. The sizes of the boulders in the formations range "from merely impressive to mind-bogglingly stupendous," writes Dr. Rónadh Cox, who led the research with her Williams College students. One block the team studied weighs an estimated 78 tons, yet was still cut free from its position 36 feet above sea level and shoved further inland.

This is the boulder ridge around the coastline of the Aran Islands. New research finds that storm waves have formed these ridges, despite the contention of some researchers that only a tsunami would have enough power to do this. 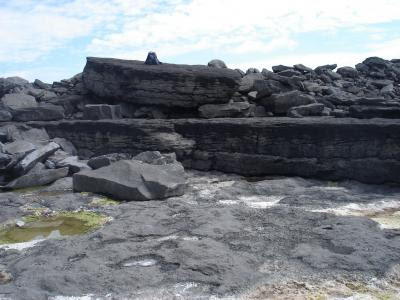 Armed with equations that model the forces generated by waves, some researchers have concluded that no ordinary ocean waves could muster the force necessary to move the largest of the boulders this high above the ocean surface and so far inland. The math suggests the rocks in the ridges could only have been put there by a tsunami.

The equations tell one story. The islands' residents tell another. According to some locals, enormous rocks have moved in their lifetimes, despite the fact that there hasn't been a tsunami to hit the islands since 1755.

"Unless you have little green men from mars doing this on the quiet, it must be storm waves," Cox said.

"Not only did they map every wall, they did it right. The maps aren't even off by even a meter."

This image shows year-to-year movement of a large boulder on the Aran Islands off the coast of Ireland. Skid marks can be seen where this rock was recently pushed inland by storm waves. 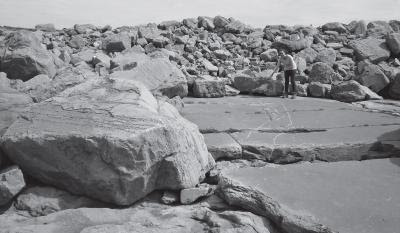 Credit: The Journal of Geology/University of Chicago Press

1839—nearly 100 years after the most recent tsunami. Some sections moved inland at an average rate of nearly 10 feet per decade. In some places, the ridge had run over and demolished field walls noted on the old maps.

Other lines of evidence corroborate residents' accounts of recent movement. When the boulders were ripped from the bedrock, tiny clams that live in cracks and crevices sometimes came along for the ride. Using radiocarbon dating, Cox and her team found that some of the rocks have been pulled from the coastline within the last 60 years. What's more, the researchers have been photographing sections of the ridge during each field season since 2006, and they've documented movement from year to year.

So what of the equations that point to tsunami as the only possible earth mover?

"We've eliminated tsunami and I think we can rule out little green men," Cox said. "What that says is our equations aren't good enough."

Cox thinks the characteristics of the Aran Island shoreline are throwing off the calculations. The Aran cliffs rise nearly vertically out of the Atlantic, leaving very deep water close to the shore. As waves slam into the sheer cliff, that water is abruptly deflected back out toward the oncoming waves. This backflow may amplify subsequent waves. The result is an occasional storm wave that is much larger than one would expect.

"In this kind of environment these would be less rare," Cox said. "You only need a couple of them to move these rocks around. The radiocarbon data show that not only are some boulders moving in recent years, but also that some of them have been in the ridges for hundreds and even a couple of thousand years. Accumulated activity of rare large-wave events over that time could certainly build these structures"

Cox plans to add a physicist to her research team in the near future to try to shed some light on the wave dynamics on the islands, but it's clear from the evidence the team has already gathered that storm waves can do more than some researchers thought.

Following the devastating Indonesian tsunami in 2004, there has been renewed interest in learning about how a tsunami can change the landscape. Cox's findings have important implications for that research.

"There's a tendency to attribute the movement of large objects to tsunami," she said. "We're saying hold the phone. Big boulders are getting moved by storm waves."

Rónadh Cox, Danielle B. Zentner, Brian J. Kirchner, and Mea S. Cook, "Boulder Ridges on the Aran Islands (Ireland): Recent Movements Caused by Storm Waves, Not Tsunami." The Journal of Geology 120:3 (May 2012). The issue will publish online Tuesday, May 1.

One of the oldest journals in geology, The Journal of Geology has since 1893 promoted the systematic philosophical and fundamental study of geology. The journal publishes original research across a broad range of subfields in geology, including geophysics, geochemistry, sedimentology, geomorphology, petrology, plate tectonics, volcanology, structural geology, mineralogy, and planetary sciences.