An extraordinary outburst produced by a black hole in a nearby galaxy has provided direct evidence for a population of old, volatile stellar black holes. The discovery, made by astronomers using NASA's Chandra X-ray Observatory, provides new insight into the nature of a mysterious class of black holes that can produce as much energy in X-rays as a million suns radiate at all wavelengths.

An extraordinary outburst from a black hole -- where its X-ray output increased at least 3,000 times -- has been seen with NASA's Chandra X-ray Observatory in the galaxy M83. Chandra observed what is called a ULX, or ultraluminous X-ray source. The panel on the left features an optical view of the full M83 galaxy, while the right panel shows a close up of the region where the ULX was found with data from Chandra (pink) and Hubble (blue and yellow). The remarkable behavior of this ULX in M83 provides direct evidence for a population of older, volatile, stellar-mass black holes. 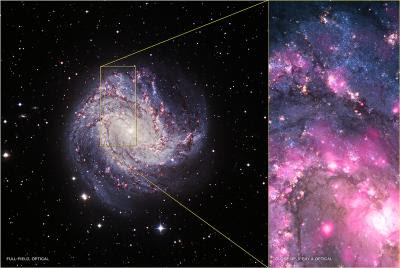 Researchers used Chandra to discover a new ultraluminous X-ray source, or ULX. These objects give off more X-rays than most binary systems, in which a companion star orbits the remains of a collapsed star. These collapsed stars form either a dense core called a neutron star or a black hole. The extra X-ray emission suggests ULXs contain black holes that might be much more massive than the ones found elsewhere in our galaxy.

The companion stars to ULXs, when identified, are usually young, massive stars, implying their black holes are also young. The latest research, however, provides direct evidence that ULXs can contain much older black holes and some sources may have been misidentified as young ones.

The intriguing new ULX is located in M83, a spiral galaxy about 15 million light years from Earth, discovered in 2010 with Chandra. Astronomers compared this data with Chandra images from 2000 and 2001, which showed the source had increased in X-ray brightness by at least 3,000 times and has since become the brightest X-ray source in M83.

The sudden brightening of the M83 ULX is one of the largest changes in X-rays ever seen for this type of object, which do not usually show dormant periods. No sign of the ULX was found in historical X-ray images made with Einstein Observatory in 1980, ROSAT in 1994, the European Space Agency's XMM-Newton in 2003 and 2008, or NASA's Swift observatory in 2005.

In Chandra observations that spanned several years, the ULX in M83 increased in X-ray brightness by at least 3,000 times. This sudden brightening is one of the largest changes in X-rays ever seen for this type of object, which do not usually show dormant periods. This can be seen in the difference between the top left and top right panels. The bottom two panels show changes in optical during that time. 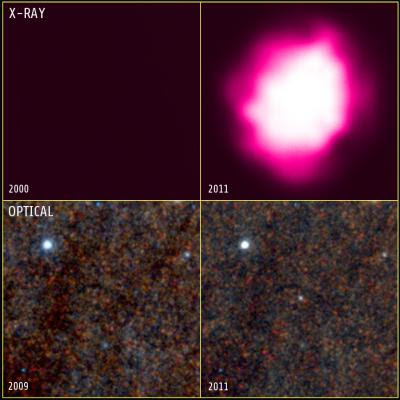 "The flaring up of this ULX took us by surprise and was a sure sign we had discovered something new about the way black holes grow," said Roberto Soria of Curtin University in Australia, who led the new study. The dramatic jump in X-ray brightness, according to the researchers, likely occurred because of a sudden increase in the amount of material falling into the black hole.

In 2011, Soria and his colleagues used optical images from the Gemini Observatory and NASA's Hubble Space Telescope to discover a bright blue source at the position of the X-ray source. The object had not been previously observed in a Magellan Telescope image taken in April 2009 or a Hubble image obtained in August 2009. The lack of a blue source in the earlier images indicates the black hole's companion star is fainter, redder and has a much lower mass than most of the companions that previously have been directly linked to ULXs. The bright, blue optical emission seen in 2011 must have been caused by a dramatic accumulation of more material from the companion star.

"If the ULX only had been observed during its peak of X-ray emission in 2010, the system easily could have been mistaken for a black hole with a massive, much younger stellar companion, about 10 to 20 million years old," said co-author William Blair of Johns Hopkins University in Baltimore.

The companion to the black hole in M83 is likely a red giant star at least 500 million years old, with a mass less than four times the sun's. Theoretical models for the evolution of stars suggest the black hole should be almost as old as its companion.

Another ULX containing a volatile, old black hole recently was discovered in the Andromeda galaxy by Amanpreet Kaur, from Clemson University, and colleagues and published in the February 2012 issue of Astronomy and Astrophysics. Matthew Middleton and colleagues from the University of Durham reported more information in the March 2012 issue of the Monthly Notices of the Royal Astronomical Society. They used data from Chandra, XMM-Newton and HST to show the ULX is highly variable and its companion is an old, red star.

"With these two objects, it's becoming clear there are two classes of ULX, one containing young, persistently growing black holes and the other containing old black holes that grow erratically," said Kip Kuntz, a co-author of the new M83 paper, also of Johns Hopkins University. "We were very fortunate to observe the M83 object at just the right time to make the before and after comparison."

A paper describing these results will appear in the May 10th issue of The Astrophysical Journal.