What Have We Got In Common With A Gorilla?

Researchers announce today that they have completed the genome sequence for the gorilla – the last genus of the living great apes to have its genome decoded. While confirming that our closest relative is the chimpanzee, the team show that much of the human genome more closely resembles the gorilla than it does the chimpanzee genome. 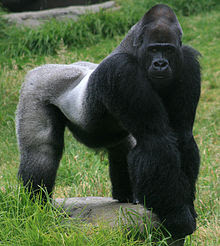 This is the first time scientists have been able to compare the genomes of all four living great apes: humans, chimpanzees, gorillas and orang-utans. This study provides a unique perspective on our own origins and is an important resource for research into human evolution and biology, as well as for gorilla biology and conservation.

"The gorilla genome is important because it sheds light on the time when our ancestors diverged from our closest evolutionary cousins. It also lets us explore the similarities and differences between our genes and those of gorilla, the largest living primate," says Aylwyn Scally, first author from the Wellcome Trust Sanger Institute. "Using DNA from Kamilah, a female western lowland gorilla, we assembled a gorilla genome sequence and compared it with the genomes of the other great apes. We also sampled DNA sequences from other gorillas in order to explore genetic differences between gorilla species."

In all three species, genes relating to sensory perception, hearing and brain development showed accelerated evolution – and particularly so in humans and gorillas.

"Our most significant findings reveal not only differences between the species reflecting millions of years of evolutionary divergence, but also similarities in parallel changes over time since their common ancestor," says Dr Chris Tyler-Smith, senior author from the Wellcome Trust Sanger Institute. "We found that gorillas share many parallel genetic changes with humans including the evolution of our hearing. Scientists had suggested that the rapid evolution of human hearing genes was linked to the evolution of language. Our results cast doubt on this, as hearing genes have evolved in gorillas at a similar rate to those in humans."

This research also illuminates the timing of splits between species. Although we commonly think of species diverging at a single point in time, this does not always reflect reality: species can separate over an extended period of time.

The team found that divergence of gorillas from humans and chimpanzees occurred around ten million years ago. The split between eastern and western gorillas was much more recent, in the last million years or so, and was gradual, although they are now genetically distinct. This split is comparable in some ways to the split between chimpanzees and bonobos, or modern humans and Neanderthals.

"Our research completes the genetic picture for overall comparisons of the great apes," says Dr Richard Durbin, senior author from the Wellcome Trust Sanger Institute, "After decades of debate, our genetic interpretations are now consistent with the fossil record and provide a way for palaeontologists and geneticists to work within the same framework.

"Our data are the last genetic piece we can gather for this puzzle: there are no other living great ape genera to study."

Gorillas survive today in just a few isolated and endangered populations in the equatorial forests of central Africa. They are severely threatened and their numbers are diminishing. This research not only informs us about human evolution, but highlights the importance of protecting and conserving the full diversity of these remarkable species.