Recent research shows that the space age has coincided with a period of unusually high solar activity, called a grand maximum. Isotopes in ice sheets and tree rings tell us that this grand solar maximum is one of 24 during the last 9300 years and suggest the high levels of solar magnetic field seen over the space age will reduce in future. This decline will cause a reduction in sunspot numbers and explosive solar events, but those events that do take place could be more damaging. Graduate student Luke Barnard of the University of Reading  presented the new results on ‘solar climate change’ in his paper at the National Astronomy Meeting in Manchester.

Image of a coronal mass ejection (CME) on June 7, 2011, recorded in ultraviolet light by the Solar Dynamics Observatory (SDO) satellite. The shock front that forms ahead of these huge expulsions of material from the solar atmosphere (the event shown moved at 1400 km/s) can generate large fluxes of highly energetic particles at Earth which can be a considerable hazard to space-based electronic systems and with repeated exposure, a health risk for crew on board high-altitude aircraft. 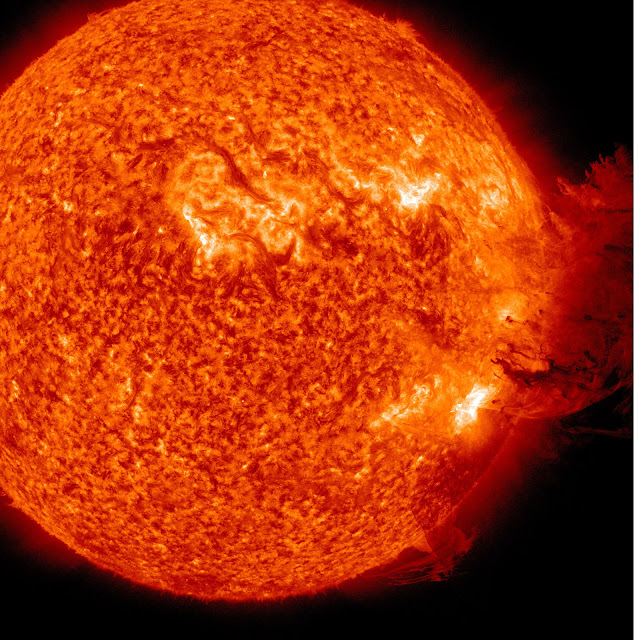 The level of radiation in the space environment is of great interest to scientists and engineers as it poses various threats to man-made systems including damage to electronics on satellites. It can also be a health hazard to astronauts and to a lesser extent the crew of high-altitude aircraft.

The main sources of radiation are galactic cosmic rays (GCRs), which are a continuous flow of highly energetic particles from outside our solar system and solar energetic particles (SEPs), which are accelerated to high energies in short bursts by explosive events on the sun. The amount of radiation in the near-Earth environment from these two sources is partly controlled in a complicated way by the strength of the Sun's magnetic field.

There are theoretical predictions supported by observational evidence that a decline in the average strength of the Sun's magnetic field would lead to an increase in the amount of GCRs reaching near-Earth space. Furthermore there are predictions that, although a decline in solar activity would mean less frequent bursts of SEPs, the bursts that do occur would be larger and more harmful.

By comparing this grand maximum with 24 previous examples, Mr Barnard predicts that there is an 8% chance that solar activity will fall to the very low levels seen in the so-called ‘Maunder minimum’, a period during the seventeenth century when very few sunspots were seen. In this instance, the flux of GCRs would probably increase by a factor of 2.5 from present day values and the probability of observing a large SEP event will fall from the presently seen 5 down to 2 events per century.


However, the more probable scenario is that solar activity will decline to approximately half its current value in the next 40 years, in which case the flux of GCRs will increase by a factor of 1.5 and the probability of large SEP events to increase from the current value to 8 events per century. As a result the near-Earth space radiation environment will probably become more hazardous in the next 40 years.

In presenting his results, Mr Barnard comments: “Radiation in space can be a serious issue for both people and the delicate electronic systems that society depends on. Our research shows that this problem is likely to get worse over the coming decades – and that engineers will need to work even harder to mitigate its impact.”