The San Jacinto Fault (SJF) Zone is a seismically active, major component of the overall southern San Andreas Fault system. Researchers from San Diego State University (SDSU) and U.S. Geological Survey have mapped evidence of past ruptures consistent with very large earthquakes along the Clark Fault, an individual strand associated with the SJF.

California Coast, Los Angeles to San Diego Bay. San Jacinto Fault Zone is labeled and parallels the Elsinore Fault to the east on the far right of the photo. NASA photo, 2008 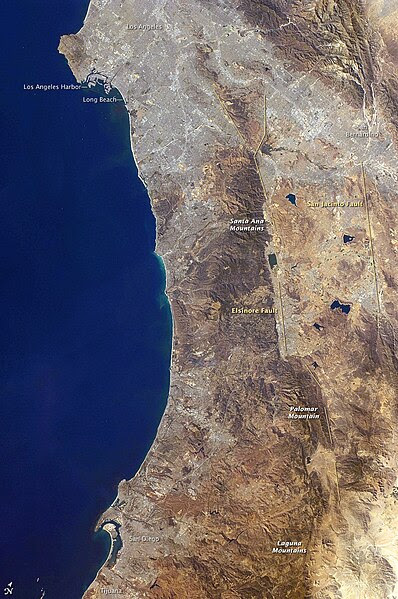 James Barrett Salisbury, now at Arizona State University and formerly a graduate student at SDSU, and his colleagues mapped the terrain by using both LiDAR and traditional field methods in order to determine the usefulness of LiDAR, which is an aerial mapping technology that emits laser pulses from an instrument mounted in an airplane. The laser pulses penetrate dense vegetation, allowing for the vegetation to be removed in data processing to yield high-resolution images of the Earth's surface. LiDAR is especially useful for analyzing rugged, poorly accessible terrain.

Salisbury and his colleagues identified geomorphic evidence that suggests three large seismic events at evenly spaced intervals along the Clark Fault. This evidence correlates with previous research by co-author Tom Rockwell who dated events at the Hog Lake paleoseismic site near Anza, Calif.

Salisbury et al., infer that Nov. 22, 1800 is the date of the most recent surface rupturing earthquake event on the Clark fault. It correlates to the poorly located historic event recorded in southern California, and generally corresponds to the most recent event date at Hog Lake, which is radiocarbon dated at ca. 1790.

"LiDAR and Field Observations of Slip Distribution for the Most Recent Surface Ruptures along the Central San Jacinto Fault," is published in the April issue of the Bulletin of the Seismological Society of America (BSSA). The authors are J. B. Salisbury, T. K. Rockwell and T.J. Middleton at San Diego State University; and K.W. Hudnut at U.S. Geological Survey. Contacts and sources:
Nan Broadbent
Seismological Society of America
on March 29, 2012