A type of cell plentiful in the brain, long considered mainly the stuff that holds the brain together and oft-overlooked by scientists more interested in flashier cells known as neurons, wields more power in the brain than has been realized, according to new research published today in Science Signaling.

Neuroscientists at the University of Rochester Medical Center report that astrocytes are crucial for creating the proper environment for our brains to work. The team found that the cells play a key role in reducing or stopping the electrical signals that are considered brain activity, playing an active role in determining when cells called neurons fire and when they don't. 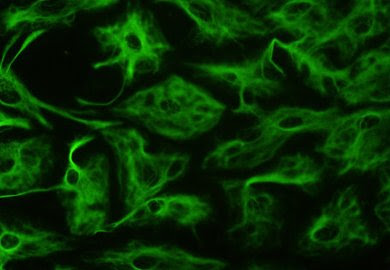 That is a big step forward from what scientists have long considered the role of astrocytes – to nurture neurons and keep them healthy.

"Astrocytes have long been called housekeeping cells – tending to neurons, nurturing them, and cleaning up after them," said Maiken Nedergaard, M.D., D.M.Sc., professor of Neurosurgery and leader of the study. "It turns out that they can influence the actions of neurons in ways that have not been realized."

Proper brain function relies on billions of electrical signals – tiny molecular explosions, really – happening remarkably in sync. Recalling the face of a loved one, swinging a baseball bat, walking down the street – all those actions rely on electrical signals passed instantly along our nerves like a molecular hot potato from one brain cell to another.

For that to happen, the molecular brew of chemicals like sodium, calcium and potassium that brain cells reside in must be just right – and astrocytes help to maintain that balanced environment. For instance, when a neuron sends an impulse, or fires, levels of potassium surrounding the cell jump dramatically, and those levels must come down immediately for the brain to work properly. Scientists have long known that that's a job for astrocytes – sopping up excess potassium, ending the nerve pulse, and restoring the cells so they can fire again immediately.

In the paper in Science Signaling, Nedergaard's team discovered an expanded role for astrocytes. The team learned that in addition to simply absorbing excess potassium, astrocytes themselves can cause potassium levels around the neuron to drop, putting neuronal signaling to a stop.

Nedergaard has investigated the secret lives of astrocytes for more than two decades. She has shown how the cells communicate using calcium to signal. Nearly 20 years ago in a paper in Science, she pioneered the idea that glial cells like astrocytes communicate with neurons and affect them. Since then, has been a lot of speculation by other scientists that chemicals call gliotransmitters, such as glutamate and ATP, are key to this process.

In contrast, in the latest research Nedergaard's team found that another signaling system involving potassium is at work. By sucking up potassium, astrocytes quell the firing of neurons, increasing what scientists call "synaptic fidelity." Important brain signals are crisper and clearer because there is less unwanted activity or "chatter" among neurons that should not be firing. Such errant neuronal activity is linked to a plethora of disorders, including epilepsy, schizophrenia, and attention-deficit disorder.

"This gives us a new target for a disease like epilepsy, where signaling among brain cells is not as controlled as it should be," said Nedergaard, whose team is based in the Division of Glia Disease and Therapeutics of the Center for Translational Neuromedicine of the Department of Neurosurgery.

The first authors of the paper are Fushun Wang, Ph.D., research assistant professor of Neurosurgery; and graduate student Nathan Anthony Smith. They did much of the work by using a sophisticated laser-based system to monitor the activity of astrocytes in the living brain of rats and mice. The work by Smith, a graduate student in the University's neuroscience program, was supported by a Kirschstein National Research Service Award from the National Institute of Neurological Disorders and Stroke (NINDS).

Nedergaard notes that the complexity and size of our astrocytes is one of few characteristics that differentiate our brains from rodents. Our astrocytes are bigger, faster, and much more complex in both structure and function. She has found that astrocytes contribute to conditions like stroke, Alzheimer's, epilepsy, and spinal cord injury.

"Astrocytes are integral to the most sophisticated brain processes," she added.

The latest paper caps a remarkable run for the Nedergaard group. In two months the team has published a paper on adenosine in the Proceedings of the National Academy of Sciences, a paper on spinal cord injury in the Journal of Neuroscience, and two papers in Science Signaling on communication between neurons and astrocytes.

The work was funded by the G. Harold and Leila Y. Mathers Charitable Foundation and NINDS.
Contacts and sources:
Tom Rickey
University of Rochester Medical Center
on March 29, 2012